“That little space between a smile and a tear”

Though perhaps not a household name, jazz great Toots Thielemans has been heard in numerous soundtracks, commercials, and theme songs and on the recordings of popular artists. The music world is substantially diminished with the passing early Monday morning of this amazingly talented and prolific artist. At 94, he had effectively retired from performing. He died in his sleep at his home in Brussels, not far from where he was born in 1922. His manager told a Belgian broadcaster, “There were no complications. He died of old age, his body was simply worn out.” 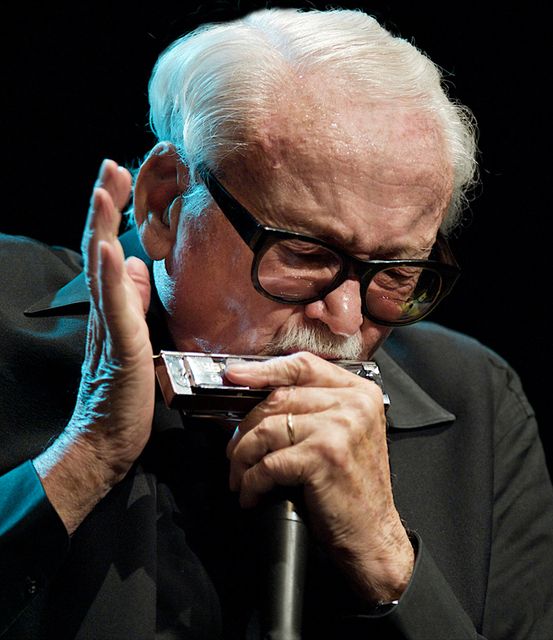 Thielemans’s performances always displayed a profound musicality. He was both a warm and fun-loving human being, and that came across. His capricious harmonica riffs conveyed a mischievous musical sensibility that audiences always got. Other musicians got it, too. Over many decades, he was in demand as an accompanist on recordings of many of the most popular artists. Billy Joel traveled to Europe in the early 1980s to recruit him for his album An Innocent Man, where his accompaniment to “Leave a Tender Moment Alone” opens the tune.

Thielemans had been playing music since his early childhood. Every Sunday, an accordionist played for tips at the beer pub his parents ran in the Brussels district of Marolles, on the same street where the painter Pieter Bruegel the Elder lived some four centuries earlier. As a baby, Jean-Baptiste (his given name) could be seen in his parents’ pub mimicking the motions of the accordion player in his crib, using a shoebox as his instrument. His father bought him a real one when he was just three and he began playing French popular songs.

In a 2011 interview in Detroit, when he was in town for the Detroit Jazzfest, Thielemans described his early influences.

He said he took up harmonica when he was 16, supposedly after seeing a James Cagney film featuring a prison death row harmonica scene. ( Angels with Dirty Faces, released in 1938, when Thielemans was 16, had a death row scene, but no harmonica.) In 1942, during the Nazi occupation of Belgium, Thielemans describes visiting a record store that had records from before the occupation. The proprietress introduced him to a recording by Louis Armstrong with the Mills Brothers. “That was my contamination” with jazz, he explained.

Around that period, he acquired a guitar on a bet with a friend and became influenced by the Gypsy jazz guitarist, Django Reinhardt. By his early adulthood, Thielemans had become a full-time musician. Thielemans’s first visit to the US was in 1947, when he performed in Miami and New York. By his own description, he was by then a “full bebopper,” owning all the recordings of the contemporary jazz greats. While jamming in a Miami club, he struck up a friendship with photographer Bill Gottlieb, who urged Thielemans to meet him in New York. Then, at the 3 Deuces Club, part of the then-thriving 52nd Street jazz scene, Gottlieb introduced him to members of J.J. Johnson’s All-Star Band, Hank Jones, Percy Heath and others, saying, “Hey fellas, I got a fella here from Belgium. He plays great harmonica.” 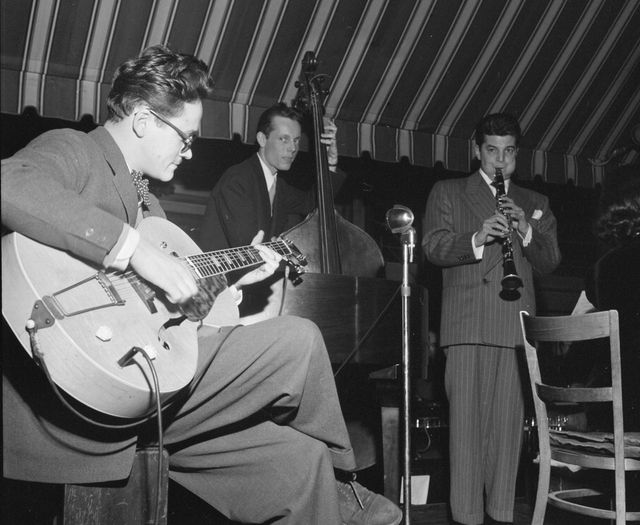 It was on his way back to Belgium from that trip that Thielemans wrote the guitar chords to Hoagy Carmichael’s classic, “Stardust.” He made a cheap acetate recording of the tune with some string players. When Duke Ellington’s band performed in Belgium, Thielemans formed a friendship with Ray Nance, Ellington’s then trumpet player (later to switch to violin). Nance asked if he could take the recording, promising that he’d get it around when he got back to the states. It wound up on Benny Goodman’s phonograph, which led to Thielemans being hired for a European tour in 1950 with Goodman’s septet. He played guitar, accompanying Goodman, Roy Eldridge and Zoot Sims.

By that time, Thielemans had been in jam sessions with bebop greats Sidney Bechet, Charlie Parker, Miles Davis and Max Roach.

In 1952, he immigrated to the US and joined Charlie Parker’s All Star Band in Philadelphia. He subsequently played with the George Shearing Quintet until 1959. During one of the band’s European tours, a young John Lennon decided to switch to a Rickenbacker electric guitar when he saw Thielemans playing one.

Thielemans made several recordings in the 1950s, playing both harmonica and guitar, but it was his 1962 album, The Whistler and His Guitar, featuring his new composition, “Bluesette” that brought him to prominence. “Bluesette” became an instant jazz standard. He described it to one interviewer as his “social security.”

Toots performed with countless musicians throughout a career that spanned almost 70 years. Notable among them, in no particular order, are Dizzy Gillespie, Oscar Peterson, Stephane Grappelli, Dinah Washington, Peggy Lee, Elis Regina, Jaco Pastorius and Stevie Wonder, with whom he shared a mutual admiration.

Thielemans performed on many movie and television soundtracks and commercials. His uncredited instrumental on PBS’s long-running television show Sesame Street has been heard by millions of children in the US. Thielmans played the main theme for the soundtrack of the 1969 film Midnight Cowboy, starring Dustin Hoffman and John Voight. 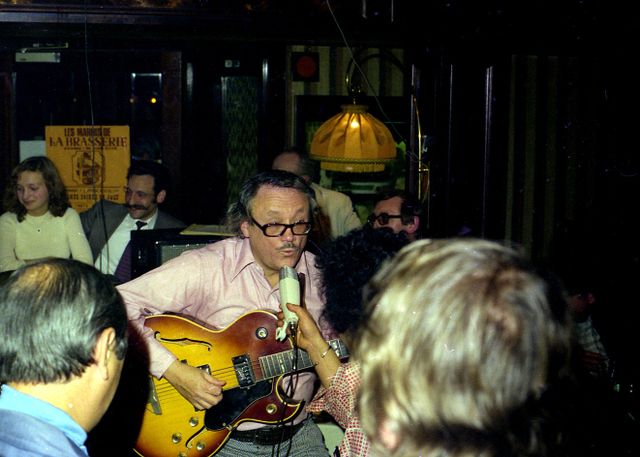 Toots at La Brasserie in Brussels, 1975

In 1980, Toots recorded a live album with guitarist Joe Pass. In 1992, he recorded the first of two Brazil Project albums, with top Brazilian artists Gilberto Gil, Oscar Castro-Neves, Caetano Veloso and others.

He developed a special musical friendship with Quincy Jones. In the liner notes of his 1995 CD, Q’s Jook Joint, Jones wrote, “I can say without hesitation that Toots is one of the greatest musicians of our time. On his instrument he ranks with the best that jazz has ever produced. He goes for the heart and makes you cry. We have worked together more times than I can count and he always keeps me coming back for more. …”

This reporter will always feel fortunate to have witnessed Toots perform with Kenny Werner at the 2011 Detroit Jazzfest. He always brought an unforgettable bitter-sweetness through his instrument, which readers will recognize if they listen to any of the worthwhile links above.

It is fitting that his website features his words, “I feel best in that little space between a smile and a tear.”

In 1992, he described his own music to the Los Angeles Times: “Sometimes I play a pretty ballad, and I almost cry myself. That’s my nature. Where do you think the blues, or ballads, the good songs, come from? They didn’t come out of a belly laugh…or a military salute.”