Mass protests continue in defiance of military crackdown in Chile

Forty-six years since the CIA-backed fascist coup of Augusto Pinochet, the Chilean oligarchy is returning to dictatorial forms of rule to suppress the growing protests of hundreds of thousands of workers and youth.

The protests are motivated by intense anger over decades of social counterrevolution, including privatized pensions and utilities, poverty wages and draconian labor regulations. In response, the Sebastián Piñera administration has swiftly invoked the 1980 Constitution established under Pinochet and wielded a police-state apparatus that has remained essentially unscathed and under the control of fascistic officials. A police crackdown in Chile has at least 11 dead amid mass protests. (AP Photo/Luis Hidalgo)

On Saturday, Piñera imposed a state of emergency, suspended democratic rights, deployed the military and enforced nighttime curfews across Santiago and other major cities.

Tanks and military detachments with assault rifles have charged demonstrators at the major plazas and bridges, accompanied by the Carabinero police, water cannons and helicopters. Videos on social media have shown soldiers, even in plainclothes, shooting live rounds in daylight and at night, taking pictures of protesters, and snatching them from their neighborhoods.

On Tuesday, the Moneda Presidential Palace in Chile confirmed that 15 civilians have died. It claims to have arrested over 2,600 protesters since Friday, when demonstrations triggered by a fare hike at the Santiago Metro spread across the country, incorporating broader demands against social inequality.

At least 88 people have suffered gunshot wounds, according to the National Human Rights Institute, while the military has shot dead at least two demonstrators—in La Serena on Sunday and in Curicó on Monday. Referring to the second case, the sub-secretary of Interior, Rodrigo Ubilla, warned Tuesday, “A person whose death cannot be reported is the one last night on Route 5 South. When the Public Ministry forbids informing something, it’s a prohibition.”

The Chilean working class has made clear that it will fiercely oppose a return to dictatorship. After calling for a general strike to end the military deployment and state of emergency, dockworkers closed the main ports, and copper miners in the Escondida mine, the largest in the country, struck Monday.

Developments in Chile are part of an upsurge of working-class militancy internationally. In Latin America, mass strikes and demonstrations against austerity have taken place in Ecuador and Honduras. There is an ongoing wave of strikes among autoworkers, miners and teachers in the center of global capitalism, the United States, a wildcat strike of thousands of railway workers in France, and an overwhelming strike authorization vote of 110,000 postal workers in the UK. 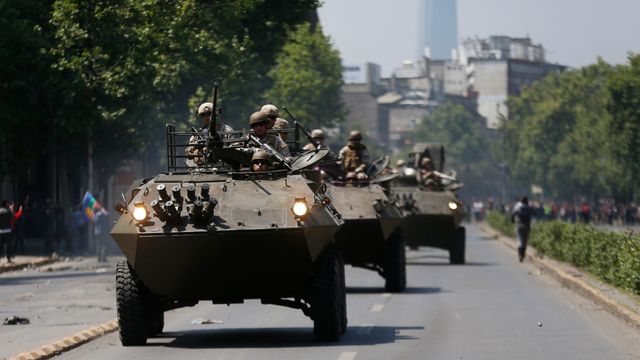 Soldiers patrol in armored vehicles as a state of emergency remains in effect in Santiago, Chile, Sunday, Oct. 20, 2019. Protests in the country have spilled over into a new day, even after President Sebastian Pinera cancelled the subway fare hike that prompted massive and violent demonstrations. (AP Photo/Luis Hidalgo)

Unable to prevent growing sectors of the working class from intervening in demonstrations and striking, the main trade union confederation in Chile, the Workers United Center (CUT), which is controlled by the Stalinist Communist Party (CP), was compelled to call a general strike Wednesday “until we mediate responses from the government and a speedy exit of the current crisis of the democratic institutions.”

Senate president Jaime Quintana, speaking for the nominal opposition within the ruling class, declared Tuesday: “Categorically, as the opposition, we don’t seek to destabilize the Piñera government, which has to urgently allow itself to be backed and announce a social agenda with immediate benefits.” Quintana heads the Party for Democracy, which led coalition governments with the Socialist Party, the Stalinist Communist Party and the Christian Democrats that ruled during 25 of the last 30 years since Pinochet left power in 1990.

These statements demonstrate that the trade unions, Stalinists and Social Democrats are working to repeat their historical betrayals of the Chilean working class by keeping growing social opposition chained behind the class enemy and its repressive apparatus.

Prior to the Pinochet coup, these forces channeled the revolutionary upheaval against the pro-business policies of the US-backed government of Eduardo Frei, behind support for the popular front (called “Unidad Popular”) led by Salvador Allende. The working-class uprising peaked in the factory and land occupations and the building of cordones industriales, or industrial networks of worker-controlled factories, between 1969 and 1973.

Despite knowing of an imminent military coup planned by Washington and fascist sectors of the Chilean military and ruling class, the Unidad Popular leaders promoted the military as the “people in uniform,” while rejecting calls by the cordones to arm workers to fight the impending coup. They instead deployed soldiers to repress strikes and occupations. Not having their own party to fight independently for their revolutionary aspirations, workers were betrayed and left physically and politically unarmed in the face of the 1973 military coup and fascist repression under Pinochet.

The revival of Pinochet-style repression in Chile is part of an international process. The police-state repression in Catalonia, the military crackdown in Ecuador, and the growth of fascism in Germany, Brazil and the United States explode the claims of the capitalist ideologues that the dissolution of the Soviet Union nearly three decades ago marked “the end of history.” In response to the growth of social opposition and the class struggle, the ruling elites are resurrecting all the political filth and reaction of the 20th century.

The basic factor behind the turn of the ruling class to authoritarianism is the extreme growth of social inequality, which is incompatible with democratic forms of rule. In Chile, inequality has returned to the levels of 1882, when the mining and banking fortune of the oligarchic Edwards family equaled seven percent of Chile’s GDP.

Today, the fortune of the Luksic family, of $17.4 billion, equals roughly six percent of GDP. A handful of oligarchs, with the closest connections to US and European imperialism, control every level of government. This includes the billionaire president, Sebastián Piñera. The layers of the upper-middle class represented by the trade unions, the CP, the Broad Front, and their apologists are hostile to any protests against social inequality and capitalism.

The lessons of the bloody betrayal in Chile in 1973 are of strategic importance to workers entering the class struggle against capitalism in Chile and internationally.

In what should be taken as a warning by the working class, Bloomberg columnist John Authers, wrote Tuesday, “If it can happen in Santiago, it could happen anywhere. That is an uncomfortable message that the rest of the world should take from the sudden breakdown of civil order in Chile.”

As the IMF warns of a “synchronized slowdown” of the global economy and geopolitical conflicts escalate, the ruling class everywhere is demonstrating that it will brutally oppose any impingement upon its wealth.

Events in Chile demonstrate that the working class must take the lead in the defense of democratic rights and opposition to inequality. However, to avoid the catastrophic betrayals of popular frontism, the spontaneous wave of class struggles globally must be consciously armed with a socialist and internationalist program. This means the building of sections of the International Committee of the Fourth International in Chile and throughout Latin America.