The Hobbit: An Unexpected Journey—not so unexpected as all that

Directed by Peter Jackson, screenplay by Fran Walsh, Philippa Boyens, Peter Jackson and Guillermo del Toro, based on the book by J.R.R. Tolkien

Filmed as a prequel to the Lord of the Rings series, this first part of The Hobbit covers approximately half the popular fantasy novel by J.R.R. Tolkien (published in 1937). It opens with an aged Bilbo Baggins (Ian Holm), a hobbit (a fictional species with many human qualities), writing out his tale in the idyllic shire of Bag End. 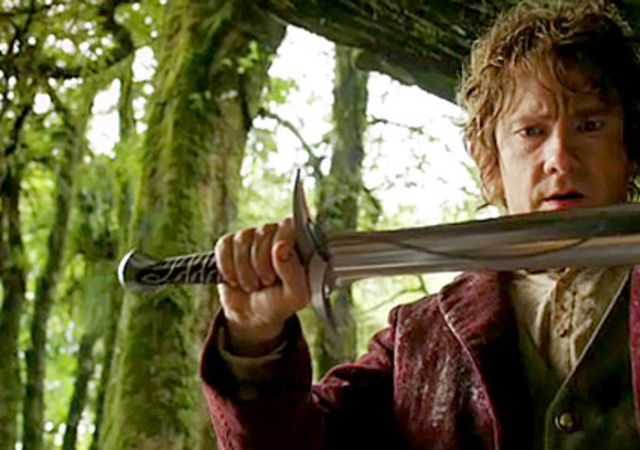 As Bilbo narrates, we meet his younger self (Martin Freeman), who lives a sedentary life in his hobbit hole and wants nothing more than a relaxed and peaceful existence. This is not to be, as he’s been chosen by the wizard Gandalf (Ian McKellen) to aid a pack of thirteen dwarves in their quest to reclaim their mountain home (and the gold therein) from the dragon Smaug.

The arrival of the dwarves at Bilbo’s dwelling is chaotic and disturbing for the hobbit. The dwarves eat too much and too noisily, and are generally rude. It is only when Gandalf returns that their reason for being there at all comes clear to Baggins.

Some of the dwarves look askance at Gandalf’s choice of Baggins to be their “burglar,” especially dwarf prince Thorin (Richard Armitage). Bilbo initially refuses to sign the contract offered him. By morning’s light, the house is spotless, the sun shines calmly and the visitors are gone. Bilbo looks about, and quickly decides to join the dwarves.

On their first night out, the company, except for Gandalf, is captured by three hungry trolls. Bilbo makes himself useful by delaying the trolls, and the wizard’s intervention saves the day. Gandalf subsequently finds an elven sword in the trolls’ cave just Bilbo’s size and gives it to the hobbit. At Bilbo’s protests that he wouldn’t know what to do with it, Gandalf insists, “Courage is not about knowing when to take a life, but when to spare one.”

Such dialogue as there is in Peter Jackson’s film is generally of this simplistic kind. McKellen and the others, all fine actors, deserve better. Further, it is only when such lines are delivered that the action pauses. Meaningful looks are exchanged briefly, and the audience is expected to nod along with the wisdom as the music swells emotively.

One evening, the group is camping out when they hear ominous sounds. When one of the dwarves scoff at the idea they might be attacked, he is taken to task by an older one who tells the tale, via vertiginous flashback, of the loss of the dwarves’ home, Erebor, through the usurpation by Smaug, and the subsequent battles to retake it. He focuses on one particular battle with the orcs (evil, ape-like creatures) in which Thorin showed himself a true leader by snicking off an arm of the chief orc, Azog.

This battle, like others in The Hobbit : An Unexpected Journey, is portrayed primarily through computer-generated images. The scale of the fighting—the entire screen is filled with tiny writhing figures—creates confusion. The howls of combat and the focus on particular acts of violence do little to clarify the situation, and the scene is made comprehensible only through the elder dwarf’s narration. The actors involved are visually treated in such a way that gives the impression that they too are computer-generated or articulated models, and the overall effect is that of a high-quality video game.

The villainous Azog, a mere name in Tolkien’s book, was presumed dead after that battle, but is a persistent foe for Thorin in the film: providing an excuse for running, growling creatures, as well as excessive battle scenes and chases. His menacing appearance is familiar—the hulking, muscular and angry type having been seen in Prometheus this past summer, for example. Indeed, quite a bit about Jackson’s film is familiar.

Obviously designed for 3D-equipped theaters, The Hobbit ’s scenery is unrelentingly huge—vast sweeping landscapes give way to enormous underground caverns or claustrophobic crevices. Each successive kingdom seems to come with a perilous bridge over a drop into distant nothingness. Boulders roll toward the audience, flying debris comes at one … and on and on, forever on, until it seems no cliché is left unplumbed when it comes to falling, being smooshed or otherwise tricked into a sense of vertigo.

Considering what can be done with 3D, one hopes for more when the technology is made available to those who begin from an imaginative starting point. Unfortunately, the primary aim of Jackson and company seems not to be bringing a good story or otherwise to life, but rather distracting the audience from what might be lacking.

The use of bombastic battle scenes and the near-elimination of some actors behind CGI imagery meant to terrify or startle can only go so far, as the action does little to move the story forward, and the patience of all but the most die-hard fans will be sorely tested by The Hobbit ’s near-three-hour length.

During a visit to Rivendell, the elven outpost, Gandalf declares, “I found it is the small everyday deeds of ordinary folk that keep the darkness at bay. Small acts of kindness and love.” This is not a line from the book, though it does express a sentiment Tolkien might have subscribed to. These are incongruous words, however, in this adaptation, which goes to great lengths to depict violence and acts of honor.

The scenes involving Gollum (Andy Serkis), whom Baggins meets alone in a cavern, do provide an interesting interlude. One cannot help but feel for the creature, driven mad from isolation, when he realizes he has lost his ring to Baggins. This is also one of the few places that Baggins is allowed to develop at all. Freeman takes full advantage of the opportunity, and his grudging mercy at the end of the scene, although we know the ultimate outcome of that relationship, is a convincing relief.

The final battle scene of the film allows Baggins a chance to play the hero. This is depicted as an unexpected twist. However, for all the surprise portrayed by those onscreen, it is unlikely there are many who did not see it coming. As with so much else in the film, the storyline of The Hobbit has a predictability that does not stem solely from familiarity with the book on which it is based.

In the end, the company looks to a distant mountaintop, on which can be descried a castle critical to the subsequent development of Tolkien’s story. The unseen (by them) dragon within awakes, and so the scene is set for the next installment.