Striking school bus drivers: “The mayor is putting a price on our children”

The World Socialist Web Site spoke to striking school bus drivers at the Atlantic Express terminal in the Bronx. Atlantic is the largest New York City school bus company, but according to media reports it is threatened with “going belly up” because bus damages from Hurricane Sandy are not covered under insurance policies provided by the subsidiaries of the bailed-out multinational insurance corporation AIG.

The first day of the strike was rainy and cold but the picketers were spirited and cheered periodically as trucks, and a number of Verizon vans in particular, honked as they passed.

Mark Ciplo, an Atlantic school bus driver, stressed the growing social inequality in New York City. “When Bloomberg was elected he only had $2 billion,” he said. “He used to be the 58th billionaire and now he is the 9th. For his years as mayor, he has a $25 billion profit. We need to investigate where he got this money from while he was saying he works for only $1 as mayor.”

Asked about the unions supporting the Democrats and allowing workers’ conditions to deteriorate, Mark responded, “The union leadership are manipulating our group. The Democrats and Republicans are acting for the system worldwide. I think the mayor and the owner know what they are doing. They know we cannot last too long, but we have nothing to lose now. It will be difficult to find all the people they would need to replace us. They create their own risk. There will be accidents. They are printing in the newspapers that we don’t do anything. Being a school bus driver, you must know a little about psychology. You need to know how to talk to the children, what to say.”

Pointing to the crowd of striking bus drivers, Rendel Emile, a veteran bus driver of 21 years, said: “Look at our problem today. These workers out from this garage or that, they have expenses to work with the flow of life. What they are trying to do to us is like trying to force a baby back into its mother’s womb. They want to make it like it was before workers had won job protection and rights.

Explaining about the difficulty of dealing with children who are special education, he said: “We have to talk to the teachers and parents about the children sometimes. I had a student who was a problem. I told the matron to stay in the back of the bus and that child spit in his face two different times. The third time was too much and I told the matron to follow the child up to his apartment to talk to the parents. After a while he came back down and said he just was forgiving the kid. He saw how it was on the other side of the door, the parent arguing and fighting and that child was going to stay angry.

Alberto Colon, a senior driver, called a hero for rescuing a ten-year-old girl who had been shot and rushing her to the hospital, explained: “That is the seriousness with which we approach this job. These kids know my name, and I have worked here for 23 years. The kids are used to us. They don’t know strangers. They know me. It will be a psychological strain on them and on their parents. Even the parents call me. I just got a call from a parent who wished us good luck with the strike.

“Now the parents need to take their children to school. What is going to happen to these parents when they are late for their jobs? The parents are being put in jeopardy with the threat of losing their jobs.

“The mayor is putting a price on our children. And the mayor is not for the blue collar worker. I am a senior man. Now Bloomberg is attacking the teachers by replacing public schools with charter schools, and the senior teachers get displaced and can’t get jobs; meanwhile, he is cutting teachers’ wages at the charter schools, just like he is doing to us.

“I am fighting for the younger workers who are coming out of school as well. And for the veterans who are coming home from these wars, to make sure they have jobs with security and decent wages. Ask any driver out here, and they will say that the reason we are out here is for the children as well.

“I made this my career. To have someone else come in and take our jobs or make me work for $8.75 an hour is a disaster. We must stay strong and united because the next generation will not have decent jobs.”

Vivian Amacker, who has been a matron and a bus driver for 22 years, made the point that “Special education kids are not supposed to be let off by themselves unless the parent authorizes it. The replacement and new drivers will not know the directions through a large and complicated city. Then what are they going to do if the parents aren’t home?

“There are kids who are called ‘runners.’ They will run away unless you put them into the hands of the teacher. They don’t even know the teachers. If the hand-to-hand delivery doesn’t happen, the child may end up missing.” 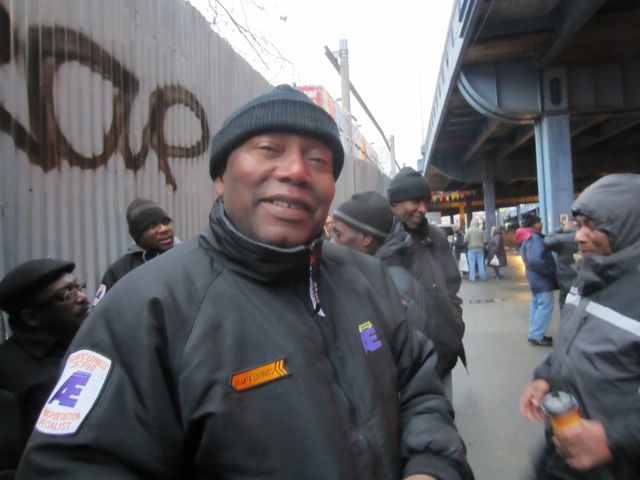 After a union official came around to tell workers not to say anything bad about the union, Reynold Cadet raised the political questions underlying the bus drivers’ struggle.

“It has been a while since the attack on jobs and wages started,” he said. “It has been going on for the past four years. There is a company in Long Island which cut the wages of their drivers to $10 an hour. I think the Democrats and Republicans are both behind these attacks. If the Democrats want something, they have to give something to the Republicans. For the ‘fiscal cliff’ Obama put through a tax increase on the working class. He says it is to get the Republicans to agree to what he wanted, but he put a $30 hole in my pocket last week.

“I don’t trust either party not to cut the social programs. I think it is time for people in this country to start thinking about an independent party. I was listening to the radio, and heard how they are killing people with drones in these wars and how much the wars cost. In my homeland, Haiti, they had the earthquake and people from the US and Canada said they had plans to rebuild the country. The country still lives in chaos, but where are these people who were going to help? I think they are helping keep it the poorest country in the hemisphere with the lowest wages. They have discovered mines and gas resources, but hundreds of thousands are still homeless.”