Let the Fire Burn and The East: The MOVE bombing in 1985 and present-day anarchism

This is the second of several articles on the recent San Francisco International Film Festival, April 25-May 9. Part one was posted May 16.

Jason Osder’s debut film Let the Fire Burn was one of the most outstanding and challenging documentaries at the San Francisco International Film Festival this year. Festival-goers were among the first to view Osder’s effort about the standoff between Philadelphia authorities and the radical, pan-Africanist MOVE organization, which culminated in a final, brutal act of police reprisal, providing the film with its title.

On May 13, 1985, the political elite of a major American city consented to the bombing of the MOVE compound and the decision to “let the fire burn” until the latter and the surrounding working class neighborhood were reduced to ashes. Five children and six adults were killed, 61 homes were destroyed and 240 people left homelessby the six-alarm blaze, one of the largest in the city’s history. 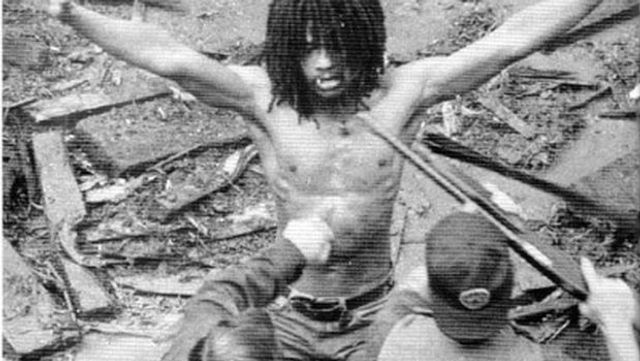 The story is told primarily through excerpted bits of an inquiry into the atrocity and a recorded interview with the only child survivor, Michael Moses Ward, 13 years old at the time and known in the MOVE group as “Birdie Africa.” This is supplemented by videos made by the MOVE organization, police videos and television news footage.

The result is a beautiful, objective view of the tragedy in its complexity, the strength of which is partly rooted in Osder’s own personal connection. He was 11 when the Philadelphia police department dropped the bomb on the MOVE house at 6221 Osage Avenue in West Philadelphia. He recalls living close enough to see the smoke. 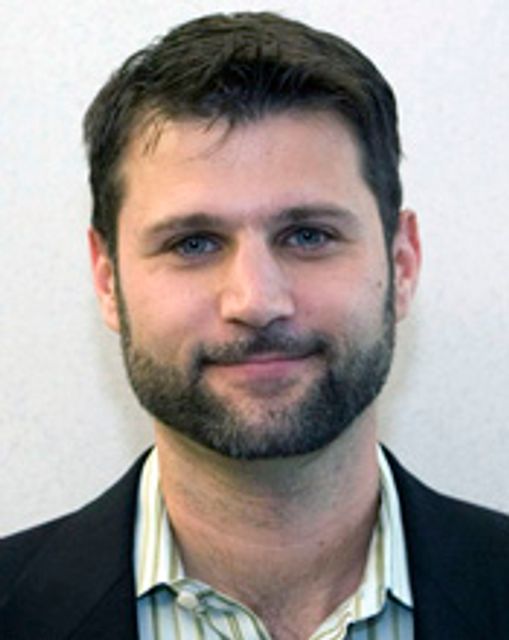 Describing the experience, Osder says, “I was frightened that kids died … I was just a kid, and kids were killed and their parents didn’t help them and the police didn’t help them, and that was scary to me. I thought, ‘Could that happen to me?’” Osder, 39, is now an assistant professor in the School of Media and Public Affairs at George Washington University in Washington, DC.

Eschewing a moralizing good-versus-evil approach, Let the Fire Burn strips its subject matter and all parties naked, revealing their contradictions, weaknesses, humanity and connection or alienation from larger social forces.

The result is riveting and at times difficult to watch. Initially, we are introduced to the MOVE organization through its own videos and the later accounts of young Birdie Africa. Founded in 1972, the mostly black radical movement advocated a “back-to-nature” lifestyle, opposed technology and lived communally. Each member adopted the surname “Africa.” 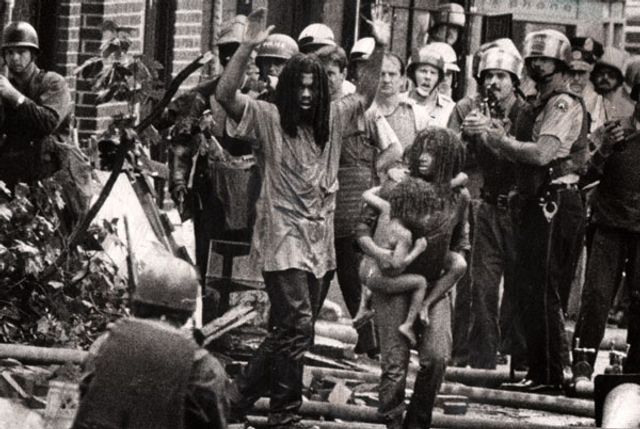 While genuine grievances motivated the MOVE members, including poverty and racism, they were deeply confused and increasingly desperate—their understanding of social reality and social change hopelessly flawed. The receding of the radicalization of the early 1970s and the dawn of the Reagan era, with large sections of the middle class rallying to the banner of “law and order,” left the group particularly unprepared.

As Osder’s film shows, in response to the unrelenting hostility and ferocity of Philadelphia’s officialdom, especially its police department under the semi-fascistic Frank Rizzo (Philadelphia police commissioner 1967-1971, mayor 1972-1980), MOVE tragically comes to glorify the militarized “guerilla unit” and adopts a quasi-Maoist faith in firearms.

MOVE eventually arms itself in self-defense, builds a bunker atop its compound and also largely alienates itself from workers in the surrounding neighborhood. The group angrily berates them all as sheep via a loud speaker attached to the outside of its residence. Both the anger and the political incoherence of the organization’s members are captured well in the testimony of two MOVE members during the subsequent hearings.

The interaction between MOVE and the neighborhood and then the manipulation by the police of the neighbors’ concerns so as to provide a pretext for the assault on MOVE is one of the most interesting aspects of the film. Residents who have been appalled by the group’s antics and registered complaints are in shock when the police take advantage of the situation to target women and children and burn the whole neighborhood to the ground.

Counterposed to MOVE we see a vengeful police department whose leading elements mouth concern for public safety while seeking nothing less than the annihilation of the entire group after a series of skirmishes between the two lead to the shooting death of an officer in 1978 (which may well have resulted from “friendly fire” by police).

Under conditions of a declining American economy and the resulting squeeze on the living standards of the working population in the late 1970s, right-wing politicians of both major parties attempted to pit sections of the middle class—and better-off workers—against the poorest and most oppressed layers. This was all against the background of the bankruptcy of Democratic Party liberalism, and its policy of limiting all social reform measures to what was acceptable to the profit system. A toxic social atmosphere developed.

These reactionary processes find expression in the person and comments of Frank Rizzo, who boasts, in relation to MOVE, that his police force has enough firepower to invade Cuba—before explaining that the problem in the US is too much democracy.

However, notably, it was Philadelphia’s first black mayor, Wilson Goode (1984-1992), a Democrat, who, in collaboration with the district attorney, the police and fire chiefs, either directed or permitted police to bomb the MOVE compound and then allowed the fire to blaze as a means of killing those inside, children included.

The real power of Osder’s Let the Fire Burn, however, lies in its currency. In the 1985 incident one sees deeply both into the nature of those times and what was to come.

When this reviewer first heard about The East ’s subject matter, the infiltration of an anarchist collective by a corporate spy, it seemed very promising. Unhappily, the work’s co-creators, director Zal Batmanglij and lead actress/co-writer Brit Marling, are nowhere near up to the complex task. 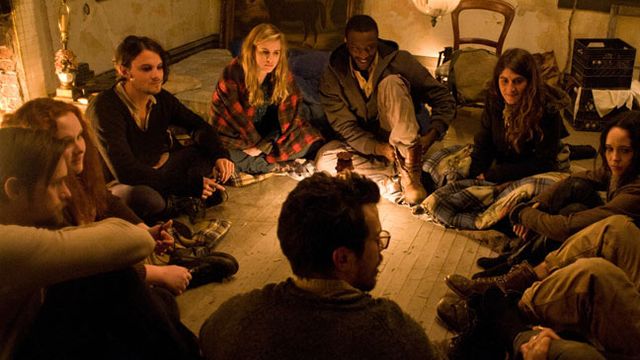 The film bills itself as a thriller and is based in part on the two-month experience of Batmanglij and Marling practicing “freeganism” (a dumpster-diving movement) in 2009.

In a scene that typifies the group’s—and the film’s—strained, heavy-handed approach, Sarah is obliged in her initial encounter with Benji and his fellow anarchists to wear a straitjacket during a meal. The other members, too, wear the same gear. Sarah tries her best to feed herself without the use of her hands. Just as she is about to give up, the group members take spoons in their mouth and lovingly begin to feed one another to the accompaniment of dramatic music, thereby presumably teaching her a lesson about the benefits of communalism and solidarity.

This sets the tone for the rest of The East. There is very little development of Sarah Moss or any of the other characters. The approach is generally hackneyed and shallow.

The fact that Sarah wears a cross and listens to Christian radio are presumably signals that she is part of the Christian Right. Does her apparent susceptibility to “extremism” help explain why she becomes indoctrinated as an eco-terrorist through the sort of team-building activities one might find at a corporate retreat?

Sarah ultimately agrees to help Benji obtain the real identities of all the young spies from her agency. However, she retains confidence that once her fellow agents become aware that corporations do bad things, they will make it right. She acts on this belief, and, as the credits roll, we learn that her confidence has been vindicated.

One imagines this is the outcome the filmmakers would find most pleasing, but it is thoroughly at odds with the thrust of the story they have told. In this alternative reality, there is nothing to fight for. Corporate crimes are simply misunderstandings.

The filmmakers’ musings indicate some of the problems. Of the film’s title, Batmanglij (born in France to Iranian parents) says: “‘The East’ is ... the East Coast, which is like something in our American collective consciousness—New England, tony, center of power. The Wicked Witch of the East in the Oz mythology was the bad witch because the book was about how the Midwest was getting screwed over by the east, by Washington. And then of course we have the Middle East or the Far East, which is seen as different or other. The ultimate Other. So, it’s funny that this word means two things, and I thought that was an interesting name for a resistance group that is combined of kids from New England who want to make themselves the Other.”

In another interview, Batmanglij is a little more down to earth, noting that the filmmakers were fascinated by anarchy as “a dramatic vehicle for us to talk about how frustrated people are. People are frustrated all over the country whether they’re in Oklahoma or Oregon or San Diego or San Francisco or LA or DC or New York or Omaha or wherever.” Unfortunately, the film does not touch on this frustration in any substantive manner.

It relies instead, far too often, on identity politics clichés and bargain basement psychologizing. Virtually every “evil-doer” is a white man—or occasionally a white woman—and the roots of terrorism are reduced to a young woman’s “father issues.” Liberation is identified with bathing naked in a river as a group, dressing like a hobo out of the 1930s, playing blue grass music in a boxcar or playing spin the bottle (!).

Marling explains how she and Batmanglij conceived of the script through their experiences together as “freegans”: “We wanted to have some adventure, and we didn’t have any money. We learned to hop trains, we learned to sleep on rooftops, we learned to claim the space that feels so private. We joined this anarchist collective.”

This may help explain why the characters who inhabit The East don’t ring true. The filmmakers’ understanding of the radical “left” is not based on significant research or even an important immersion, but rather on their brief personal experiences with largely apolitical lifestyle movements—not unlike the “hippies” of yore.

Onto this bohemian social type they unnaturally graft the intensity and discipline of a radical terrorist movement and present the human results as “revolutionaries,” so persuasive that a right-wing FBI agent is ready to convert, virtually overnight.