Kyrgyzstan imposes state of emergency against mine protest

The government of Kyrgyzstan imposed a state of emergency in the northern district of Dzhety Oguz on Friday, in response to ongoing protests against a Canadian-owned mining operation.

Protesters are demanding that Centerra Gold, which operates the Kumtor mine in the Issyk Kul region of the Central Asian country, turn over a greater share of its profits to meet the needs of the local population. They demand that the company, whose first quarter profits soared to $51.4 million from $9.6 million a year earlier, fund roads, schools, water pipelines, and hospital equipment, and provide area residents with jobs and long-term loans. There were also demands that the mine be nationalized.

On Friday, the government violently retook control of a sub-station that provides power to the Kumtor mine. Protesters had seized the installation on Thursday night and cut off the energy supply to the mine, after having blockaded the road that leads to Kumtor since Tuesday.

According to news agencies, hundreds of police descended upon about 1,000 demonstrators, resulting in the arrest of 92 participants and dozens of injuries. The protesters defended themselves by throwing rocks against the security services, which targeted them with tear gas and, according to some reports, firearms. Police and health officials refuse to confirm or deny this allegation. At least one person was killed. 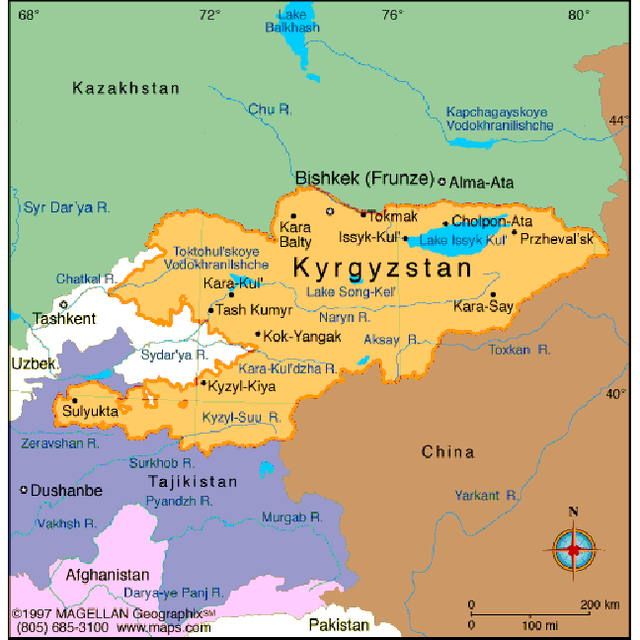 The BBC reports that the Kyrgyz government has already initiated criminal proceedings against those who allegedly damaged the power station, based on recently passed legislation that makes it illegal to occupy government buildings.

According to Russian news outlet RIA Novosti, the violence on the road leading to the Kumtor mine spread to numerous villages along the southern shore of Lake Issyk Kul, where police broke up demonstrations by local residents. In the southern Kyrgyz city of Jalalabad, anti-government forces reportedly stormed the local administrative offices and announced their intention to appoint a “people’s” governor. State officials deny that this took place.

The state of emergency and accompanying curfew is set to remain in place until June 10. Promising ongoing repression, President Almazbek Atambayev stated on Friday, “All the organizers of the unrest will be strictly punished in line with the law.”

The Kyrgyz government is protecting one of its major sources of wealth: the Kumtor mine alone accounts for 12 percent of the country’s gross domestic product (GDP), and over half of all its exports in 2011. Officials claim that the protests have already exacted $2.8 million worth of losses at the mine and hurt the summer tourism season.

“This is very serious damage. Those responsible for this crime will have to be punished,” threatened Vice-Premier Tayirbek Sarpashev.

Kyrgyzstan is one of Central Asia’s poorest countries, with an absolute poverty rate of just under 32 percent as of 2009 according to World Bank figures. Conditions are worst in high-altitude areas like Issyk Kul, the site of the current violence. Average wages for the country as a whole stand at $130 a month, and many families depend on remittances from relatives working in Russia, which account for 40 percent of GDP.

Centerra Gold has been an object of popular hatred for years. In October 2012, demonstrators demanding the nationalization of the Kumtor mine attempted to storm parliament in the Kyrgyz capital Bishkek, resulting in 12 injuries at the hands of the police.

Earlier that year, a strike of 1,400 workers briefly halted operations at the facility, with workers demanding that the company increase its contributions to the state social welfare fund. One industry expert recently told The Northern Miner that Kumtor has been targeted by road blocks five times between 2005 and 2011.

In May of this year, President Atambayev blamed “mob rule” for the failure of a tender to go through on what would have been Kyrgyzstan’s second largest gold mine, Jerooy.

Speaking to EurasiaNet.org, the head of the Kyrgyz Mine Association, Valentin Bogetski, denounced the “counter-productive role of the local population”—which is deeply opposed to the development of the Jerooy mine out of deep fears that it will damage the nearby Talas River. Environmental concerns are also a factor in opposition to mining operations at Kumtor.

Even as the Kyrgyz government responded with brute force to the recent protests against Centerra Gold, sections of the country’s ruling elite are in conflict with the company over the terms of its operating license at Kumtor. The current agreement between Centerra and Kyrgyzstan was signed in 2009, prior to the ouster of former President Kurmanbek Bakiyev.

The terms of that arrangement were undoubtedly drafted to the benefit of Bakiyev and his cronies, with the slush funds generated from Kyrgyzstan’s resources regularly being divided and re-divided according to which layer inside the elite manages to hold power.

The current parliament, populated with many anti-Bakiyev forces, wants to renegotiate the deal with Centerra. In particular, many parliamentary deputies are demanding an end to the sweetheart deal signed in 2009, under which the company pays taxes of just 13 percent on its gross revenue and a further 1 percent for regional development.

Some layers within the Kyrgyz political establishment have even called for the re-nationalization of Kumtor.

Parliament had set a deadline of June 1 to either repudiate or renegotiate the deal with Centerra. President Atambayev has now stated that this deadline will be postponed. His prime minister, Zhantoro Satybaldiyev, told Reuters that the government’s goal was to establish a “joint venture by unbundling Kumtor from Centerra and registering it in Kyrgyzstan,” insisting that if this were to take place, “cash flow will double.”

Satybaldiyev’s comments make clear that the government’s intention is to negotiate an arrangement that will increase the flow of funds into the hands of well-connected government insiders.