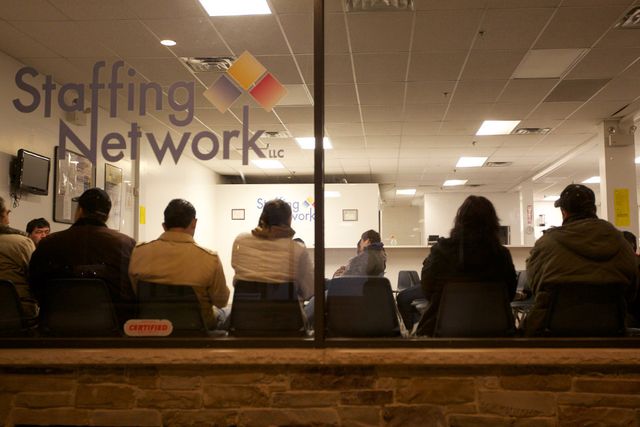 An early morning scene at a temporary agency [Photo: Sally Ryan for ProPublica]

A year ago, incumbent candidate Barack Obama referred to “the defining issue of our time” as “good, middle-class jobs, so people can have confidence if they work hard, they can get ahead.” Obama was hailed, in typical fashion, by the pseudo-lefts of the Nation as “arguing eloquently for public initiatives to save the middle class and revive the American dream.”

This promise of good, middle-class jobs was among Obama’s most cruel and cynical pledges.

In fact, the crisis unleashed in 2008 was deliberately prosecuted by the Obama government for the purposes of transforming America’s work environment.This assault on workers’ standards of living was spearheaded by the administration’s demand to cut auto workers’ wages in half as a precondition for the auto bailout. It has been continually worsened through the wholesale attack on federal jobs, state funding, workers’ protections and most recently the sequestration.

Millions of workers are now paying the price. A recent report from the Federal Reserve Bank of San Francisco demonstrates graphically the extent to which better-paying jobs have been switched out en masse for low-wage positions, drastically increasing the working poor over the past four years.

Sixty percent of the jobs destroyed in the aftermath of the crash were “mid-range occupations, paying between $13.83 and $21.13 per hour. However, 58 percent of the jobs that have returned pay less than $13.83. The bulk of the jobs created since the recession, 1.7 million, have been in food services, retail and temporary agencies, sectors in which workers typically remain below the poverty level even working full-time. 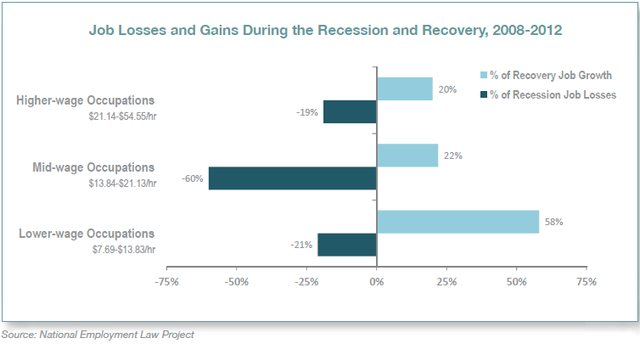 Temporary agencies have emerged as the growth industry of the Obama administration. No other sector of the economy comes close. These jobs, the nation’s most insecure and low-paying, have jumped 50 percent since the end of the recession. A full 12 percent of the American workforce, a staggering 17 million people, is now forced to depend on the uncertain and stressful world of contingency work.

ProPublica, an investigative journalism organization, recently published “TempLand: Working in the New Economy”. The series of articles portrays the proliferation of the blue-collar “permatemp” in the 1990s. This phenomenon dominates in many smaller US towns where workers, even with technical training, cannot find manufacturing or warehouse work without first being directed to a temp agency. For many thousands, they spend years—even decades—as temps, even under the deceitful category of “temp to permanent.” 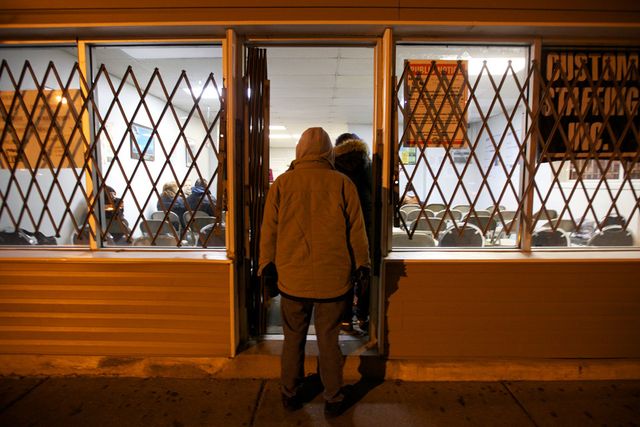 Workers lining early in the morning up at Custom Staffing Inc. near Chicago [Photo: Sally Ryan for ProPublica]

Author Michael Grabell documents the temp “ecosystem” in Chicago’s Little Village, the largest Mexican community in the Midwest. It is a pattern replicated in poorer neighborhoods across the US.

In Little Village, a loose network of local labor contractors, raiteros, hire groups of workers, often online, and then pick them up from hiring halls, street corners or alleys and pack them into vans and buses for commutes to warehouse jobs. The raiteros have melded with temp agencies and their corporate clients: they recruit, deciding who works and who does not, and distribute paychecks, explains Grabell. “And it’s the low-wage workers — not the temp agencies or their clients, corporate giants like Ty [of Beanie Baby fame] — who bear the cost. Officially, the raiteros ’ fee, usually $8 a day, is for transportation. But, workers say, anyone who doesn’t pay doesn’t get work.

“From this crowded barrio,” the report continues, “ raiteros ferry as many as 1,000 workers a day to warehouses and factories in Chicago and its suburbs. Many of these workers end up making about $6 an hour, well below Illinois’ minimum wage of $8.25 an hour, because of the fees and unpaid waiting time.

“If you complain too much, they won’t take you to work anymore,” Maria Castro told ProPublica. “Like other workers, Castro said she has never been to Select Remedy, the temp agency that officially employs her. She knows Ty only as los peluches, Spanish for ‘the stuffed animals.’

“Ty is among a long list of brand-name companies that benefit from the raitero system,” the author notes. “Workers report packing products for Sony, Frito Lay, Pampered Chef, Smirnoff, Marlboro and Fresh Express, a subsidiary of Chiquita Brands where workers cut vegetables for bagged salads and fast-food restaurants like Burger King and McDonald’s.”

These temp workers are contracted day to day. Grabell described the schedule that these workers endure. Typically, a worker will need to arise by 3 a.m. in order to get to the labor contracting site by 4:30 a.m. At that time, the prospective workers will get on a list and then wait to see if they are called. If so, they can be transported to the work site, to arrive by 6 a.m. Then the paid workday begins.

Select Family of Staffing Companies, Castro’s employer, posted $1.8 billion in revenue last year and employs nearly 100,000 people every week, according to ProPublica’s profile of the firm. Started in 1985, Select bought more than three dozen staffing firms in the 2000s and became a national chain. Its revenues skyrocketed from just over $300 million in 2002 to $1.8 billion in 2011. In 2012, Staffing Industry Analysts, a research firm, ranked Select the 10th largest temp agency in America and the fourth largest in the industrial sector. It supplies workers to Walmart warehouses, Bank of America, Toyota, Costco, Trader Joe’s, General Mills, Mattel and Fisher-Price, ProPublica reports.

Temp agencies have become among the largest employers in America. Kelly Services is second in size only to Walmart. Adecco is a global Fortune 500 company placing 650,000 workers daily in 60 countries.

High concentrations of temp workers dominate cities throughout the US, including Grand Rapids, Michigan; Middlesex County, New Jersey; Memphis, Tennessee; Inland Empire, California; and Lehigh County, Pennsylvania. Tens of thousands of temps are used by America’s largest corporations—Walmart, Macy’s, Frito-Lay, Nike, Walgreens, Del Monte. ProPublica pointed out that the list of major companies not using contingent labor would probably be shorter than those who take advantage of such “flexible” labor.

The use of temp labor has proliferated throughout the auto industry, without any significant opposition from the UAW. The practice is rarely publicized. General Motors hires contract workers at its Lake Orion plant, through Logistics Insight, for $9 an hour. In Greenville County, South Carolina, hundreds of temps are supplied to luxury automaker BMW by MAU Workforce Solutions. Willie Pearson told ProPublica that he has not seen a worker hired directly by BMW since 2005. No one “has been hired straight on. It’s all been through temporary agencies,” he said. At VW’s plant in Chattanooga, TN, temp company Aerotek pays auto workers $12 per hour, the same rate of pay as Nissan’s contract workers in Canton, Mississippi.

For temps, the pay is always lower and the injury rates higher. It is estimated that at least one million temp workers earn less than $25,000 a year.

Only 8 percent of temp workers in the US receive health care, compared with 56 percent of employees nationally. The states decide if additional fees can be deducted from wages, as are Castro’s. Recently temp firms have successfully lobbied to change laws or regulatory interpretations in 31 states, so that workers cannot get unemployment benefits without reregistering with the temp agency.

The system is a boon to businesses. Not only are wages rock-bottom, but the system allows the host company to order workers based on how production fluctuates, while also reducing a series of business costs—from workman’s compensation claims to unemployment taxes to regulatory compliance. Often temporaries are denied overtime pay. Moreover, with a series of corporate layers often involved, the arrangement provides corporate immunity from lawsuits over unsafe or abusive work environments.

ProPublica uncovered the fact that in some large factories and warehouses, the client company will use 3, 4, 5 or more different temp staffing agencies, as well as direct-hires. Companies such as Walmart have been known to switch temp agencies every six months, to limit possible liability.

It is assumed in the industry that Obamacare will result in another upswing, as businesses sidestep the provision to provide medical coverage for permanent workers. Last week, however, the Obama administration itself delayed the implementation of the provision for a year.

In January, a study “At the Company’s Mercy” was released by the Center for Progressive Reform documenting the disproportionate rates of injuries and death sustained by temporary workers. Hundreds of thousands of temp workers perform the most hazardous labor in the US—largely without health care and often without recourse to workman’s compensation.

The study examined the rise of temporary workers in four areas, including farming, construction, warehousing and the hotel industry. “Growers are increasingly turning to farm labor contractors as a source of workers,” explained CPR, “with the percentage of workers hired through those firms increasing from 14 percent in 1993-1994 to 21 percent in 2001-2002. CPR notes, “These workers face stagnating wages that remain below federal poverty levels, unhealthy work and living conditions that do not meet basic standards, and even cases of modern day slavery.”

Temporaries in the construction industry usually perform the most dangerous jobs, such as general laborers, painters and roofers, jobs that carry significant risks of musculoskeletal injuries, falls and nail-gun injuries.

Warehousing hires hundreds of thousands of contingent workers. This industry is known for its repetitive stresses of lifting and moving goods, often resulting in carpal tunnel syndrome and nerve system damage. Warehousing and storage workers die on the job at a rate almost twice that of the average US worker.

While these types of blue-collar work are the largest segment of temp workers, many traditionally white-collar jobs are now outsourced to agencies as well. Among temp workers, 15 percent are data entry keyers, 11.5 percent are demonstrators and product promoters. There are thousands of accountants, office workers, technical employees and even doctors. Staffing Industry Analysts, an industry consortium, forecasts that spending on temporary doctors will grow 10 percent this year and next.

The explosion of the temp industry is one part of the assault on the living standards of the working class. The very notion of the right to a job—and what constitutes a job—has undergone a sea change.

A recent case of a canned-goods drive in Kalamazoo, Michigan became a notorious sign of the times—as it affected what previously was an elite section of the workforce. The food items were being collected for the part-time adjunct faculty at the local community college, many of whom qualified for food stamps.

Likewise, young people seeking to enter the job market have been forced, in the millions, to take low-paying or non-paying “internships” in another version of the destruction of jobs. According to a 2008 study by the National Association of Colleges and Employers, 50 percent of graduating seniors had an internship, with about half those estimated to be unpaid.

The Obama administration’s policy, far from reversing the destruction of workers’ rights prosecuted with such vengeance in the 1980s and 1990s, has accelerated the impoverishment of wide swaths of America. Needless to add, as corrupt supports of the capitalist profit system, the AFL-CIO and other unions have thrown their support to the process.