One of the clearest examples of the nature of the supposed economic recovery of New York City following the financial collapse of 2008 is the ever-rising cost of housing for most of the city’s working class.

According to a recent report issued by the Furman Center for Real Estate and Urban Policy at New York University, even as real household income dropped in the city between 2007 and 2011, the median rent increased 8.5 percent, from $999 to $1084.

The US Department of Housing and Urban Development defines a “moderate rent burden” as meaning that households spent between 30 and 50 percent of their total income towards gross rent (including both the rent to the landlord and the cost of utilities not paid to the landlord). “Severely burdened” means spending 50 percent or more of household income on gross rent. By this standard the percentage of New York’s renters who were severely burdened increased from 27 percent in 2007 to 31 percent in 2011, and the moderately burdened increased from 23 percent to 24 percent.

New York is just one example of the increased pressure that rent payments are placing on working families. The median rent burden also increased in the next four largest cities. Like New York, more than half of families were moderately or severely burdened. Los Angeles, California has the highest combined total, 62 percent, but Philadelphia has the highest percentage, at 37 percent, of those renters paying 50 percent or more of their income for housing.

The report makes clear that these figures understate the crisis facing the poorest families. For those households at 80 percent or less of the median income, 81 percent of Los Angeles renters paid more than 30 percent of their income on rent, and for New York this number was 78 percent.

The New York Daily News recently reported that average monthly rent in Brooklyn increased to $3,035 in July of this year, an 8.2 percent increase from July of last year. Brooklyn continues to narrow the gap with Manhattan, the borough with the highest rents. Average rental there was $3,822, or more than most workers earn in a month.

These figures reflect the skyrocketing social inequality in New York and throughout the country. The unprecedented class divide was exemplified in the recent announcement of the construction of a 33-story condominium on the Upper West Side of Manhattan that would have one entrance for the well- to-do who can afford the costs of buying a condo apartment that can cost about $1 million, and another entrance for families that can only afford to rent an apartment for $1,099 a month. (See “New York City high-rise to have separate entrances for rich and poor,” 23 August 2013.)

Developers of this and similar projects are richly awarded by the city government itself, which grants tax abatements for all apartment complexes that include some so-called “affordable units” that are reserved for those who cannot afford to pay the skyrocketing market rates. Even the “affordable” apartments are far more than most workers can pay. Meanwhile, this lucrative payoff to developers cost the city about $2.9 billion in lost tax revenues, or about 20 percent of all property taxes collected in 2012.

The 630,000 New Yorkers, 8.2 percent of the population, who live in public housing are not subject to market rents, but they are still deeply affected by the housing crisis. The New York City Housing Authority (NYCHA) has lost over $905 million in operating subsidies and another $876 million in the federal capital program funds since 2001. NYCHA now has $6 billion in unfunded capital improvements, a number that is expected to grow to $13.4 billion within the next five years. In addition, the housing authority is running an annual $60 million operating deficit, and it has eliminated 3,000 jobs in the last decade, a cutback that has contributed to poorer service for the hundreds of thousands of people who live in public housing.

NYCHA recently came up with a plan to deal with its fiscal crisis by taking advantage of the current demand for luxury housing at the expense of its own tenants. The proposal provoked enormous opposition from residents throughout the projects. NYCHA called for the leasing of fourteen sites, located within eight developments in Manhattan, to real estate investors. These sites would be used for luxury apartment towers right in the middle of already crowded projects. According to the authority, this would produce an income of $30 to $50 million a year. The claim was that this would be applied to reduce the enormous backlog of maintenance complaints and needed repairs in the housing complexes.

The plan envisions developers creating about 4,000 new apartments, 80 percent of which would be rented at market prices. The other 20 percent would be reserved for so-called “affordable” units. And the developers would get enormous tax breaks for building this meager number of less expensive apartments.

This so-called Infill proposal has been scorned by tenants, who correctly see in it not only the destruction of their parks, community centers and parking lots, but also the first step in the repudiation of the decades-old commitment of public housing for sections of the working class.

The housing agency, facing this vocal opposition, has now announced that instead of requesting formal proposals from the real estate industry to build on the eight housing projects, it would ask for ideas from developers in November of this year. The suggestion is that the plan is being pushed back and will become the responsibility of the new mayor to take office on January 1.

The media has portrayed this decision as a major retreat. On this as on other issues, workers are being told to trust in a change in administration and the likely election of a Democratic mayor. The fact remains, however, that the plans for luxury housing on the property of the city’s housing projects have not been abandoned, nor have any of the big-business candidates for mayor, either Democrat or Republican, advanced any proposals to improve the scandalous conditions facing so many tenants of the city’s public housing.

In fact, just the opposite is the case. The agency had announced plans in mid-June to close 69 community as well as 37 senior centers, raise rents, lay off about 500 of its workers, continue a hiring freeze, and possibly impose furloughs. This is a direct result of the federal sequester cuts to social programs throughout the country. For NYCHA, this amounts to a loss of $205 million, or about 11 percent of its funding for the year. The announced cuts were rescinded when the city government agreed to provide $58 million. This is also only a temporary reprieve, since there is still a $147 million deficit. 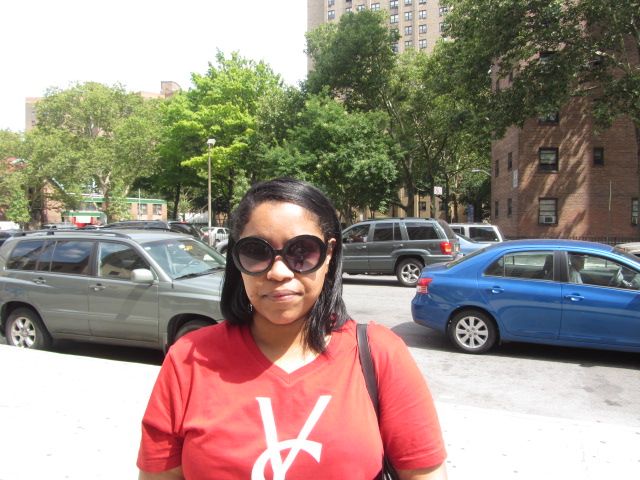 The WSWS interviewed a number of residents of the Baruch Houses, a public housing project in Manhattan.

Danielly Garcia explained, “I first moved in here in 2000 and paid $182 a month with light and gas included. This allowed me to pay my rent and still go to school to become a nurse. When I graduated and told Housing that I was making $20 an hour, they jacked up my rent. Now I pay $1,000 a month. After St. Vincent’s Hospital closed in 2010 and I lost my job, I had to become a nurse in a clinic. I took that job with a lower pay because it has benefits.

“If they privatize, where will everyone go? They will destroy the only place where we can live. I am a single mom. This will directly affect me and my child, considering the cost of clothes, food, deodorant, everything. It is a good place for me to live. If they push up the rents around here, they would be putting me between a rock and hard place. Milk is $4 a gallon. It is $30 a week for me just to get to work. I make $60,000 a year, but have a student debt that makes me feel poor.

“What kills me is that these rich people have such a privileged life. While they are at the beach, do you think the lights aren’t on in the factory? Every time a president comes into office, I prepare to be duped.”

Roberto Napoleon has been president of the Tenants Association at the Baruch Houses for 40 years. 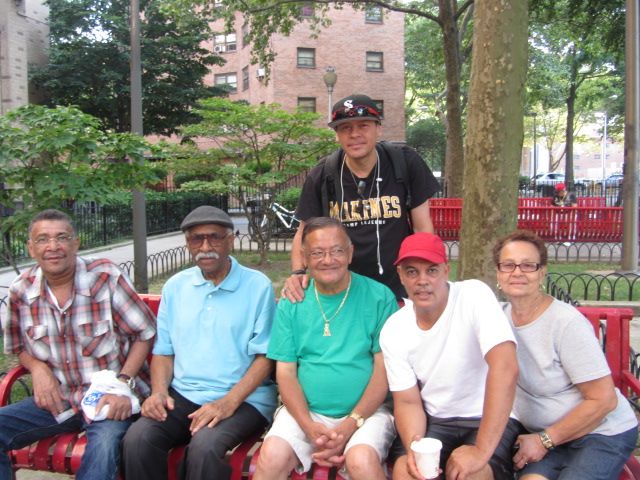 “Three other associations went to court with us against the plans for the luxury apartment buildings,” Mr. Napoleon said.

“We opposed the development for a number of reasons. First, we need more space for the children. Second, they are taking our main parking lot to build on, with no plans to provide parking. Third, their plan would have 20 percent of the apartments limited to an affordable rent amount, but we can’t afford these “affordable” rents. Finally, we are afraid a luxury apartment building would open the door to getting rid of public housing tenants.

“The Housing Authority has harassed us since the lawsuit. They have delayed rent letters to seniors. If you don’t get your rent letters on time, you can’t pay your rent on time and then they threaten you with eviction. These kinds of eviction letters that are sent to senior residents telling them that they are being thrown out can shock people and therefore sometimes kills seniors, who live in fear of this.

“The seniors here are condemned, with no elevators and doors for the handicapped. The number of guards here has been cut from three to one, and he is handicapped. How are people going to escape from a fire without help? And they’ve taken away the garbage dumpsters. They say it is to stop the rats, but where are tenants supposed to put their garbage? So there is garbage all over the front area.

Juana Rodriquez has been a Baruch resident for 47 years. She commented, “It is terrible if they put luxury high-rises in because if they do, they will take over. They will do it little by little, but we will be out of here.

“The federal cuts to public housing are terrible as well. If you have repairs that need to be done in in your house now, it takes a year or two to do them. I end up doing them myself. There are holes in the walls and on the stairs that haven’t been repaired. There were rats before Hurricane Sandy, but after the storm, there are more rats. When I get up in the morning to drink my coffee, I see rats having a party.

“When I first came here, they had inspectors who came here and if they saw anything that needed fixing, they fixed it right away. Now they come once a year, and now it takes one or two years to get something repaired. One time when my sink was clogged, and they told me it would take one or three months, my family got me a snake to do the job.

“It was ridiculous that the Democratic mayoral candidates had sleepovers in public housing. They know how we live. It was uncalled for. Every year, they say the same thing. They will help us and they are going to fix things. But then there is no money to fix anything. It is ridiculous.

“I don’t think the Democrats in the city or in Albany or Washington represent us. They come and tell us to vote for them, and then they forget about us.”