Last week, a 35-metre-long mosaic mural of the 1839 Chartist uprising in Newport, Wales, was demolished as part of the redevelopment of the city’s run-down commercial centre. (See: YouTube video.)

The local Labour Party-controlled council gave the go-ahead for its demolition, the day before a planned demonstration and in blatant disregard for the historical significance and beauty of the artwork. Local opposition expressed in an online petition attracted thousands of signatures in less than a month.

In a terse press release, the council declared, “The mural is a modern day depiction of an historical event that happened in Newport and has served to remind us of Newport’s past, but we must now focus on Newport’s future.”

A council spokesman added, “We are aware that the mural does mean a lot to some people but the council has had to consider the wider picture. Unfortunately, it may have proved a fruitless effort to save the mural and too big a price to pay, both financially and for the overall good of the city and its residents.”

The council sought to justify its destruction of the mural on the grounds that the Welsh heritage organisation, Cadw, had not awarded the artwork listed status and that its relocation would cost £600,000. A spokesperson for Cadw commented, “The Chartist Mural in Newport has not been awarded listing status principally because it fell short of the criteria to be listed at the national level on grounds of its special architectural interest. The quality of building to which the mosaic is attached is poor and the underpass itself has no intrinsic design merits. It was also felt that there was no specific association between the location of the mural and the Chartist uprising.” 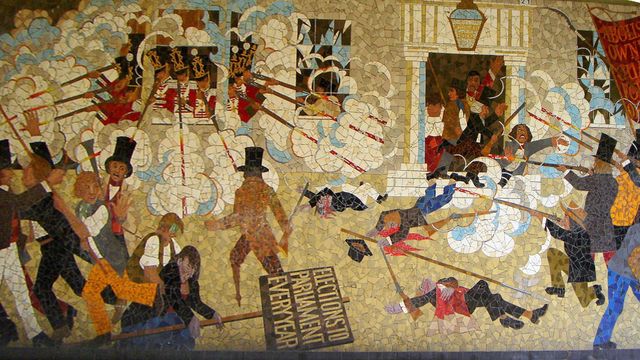 Newport Uprising mural before its destruction

In fact, the mural was situated in an underground walkway leading to John Frost Square, named after one of the Chartist leaders in Wales and a couple hundred metres from the main fighting that took place at the Westgate Hotel.

The architectural and artistic significance of the mural, produced by Kenneth Budd (1925-1995), was explained to the World Socialist Web Site by his son, Oliver, also a mosaic artist.

“My father was not really a political person, but had a great interest in history, particularly when it involved ordinary people. He believed there was an important link between history and maintaining culture in society.”

Budd said that several of his father’s other works had also been demolished. These include some of those produced during the redevelopment of the UK’s second largest city, Birmingham, in the 1960s—the English Civil War (Battle of Birmingham, 1643), the J. F. Kennedy Memorial and the Colmore Circus Industrial mural.

Budd explained, “I have been able to reconstruct the Kennedy memorial from original plans. The work was unveiled in February this year. I could have saved the Newport one, but the council did not ask me. It would not have been expensive to move. Especially as it now seems the mural was not firmly attached to the wall.” 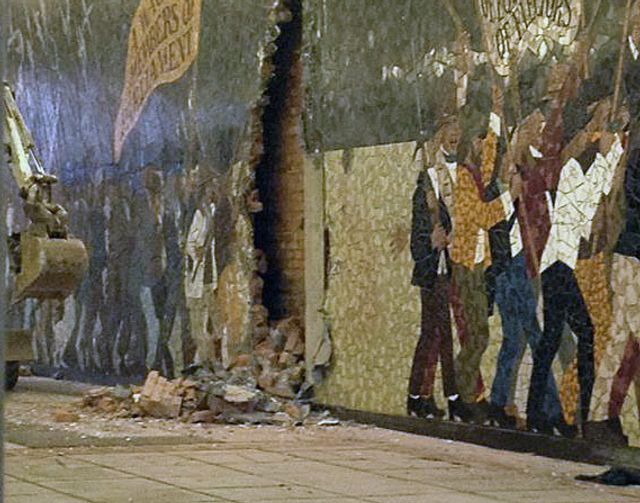 That Newport City council pressed ahead regardless of the mosaic’s destruction is linked to a number of factors. Increasingly, cash-starved councils are handing over control of city centres and their public spaces to private companies whenever redevelopment takes place—as in the case of Cabot Circus in Bristol and Liverpool One, which covers 34 streets in the heart of Liverpool. Newport, which has the highest number of closed High Street shops per head of the population of any city in Europe, is going down the same route.

Anything that detracts from the pursuit of profit is swept away. Rules and regulations are enforced by uniformed private security officers amid round-the-clock surveillance. A host of activities such as cycling, rollerblading, taking photographs and political protest are banned.

The Occupy movement in London, for example, ended up camping on the steps of St. Paul’s Cathedral because Paternoster Square, in which the stock exchange was located, had been privatised a few years before.

However, the Newport mural’s destruction is in large measure due to its symbolic significance to the developers and the Labour Party. 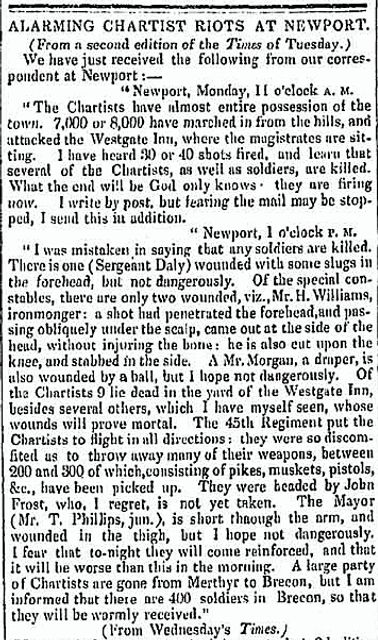 The Times report on the Newport Uprising, November 1839

The Newport Rising, on November 4, 1839, a few months after Parliament had rejected the six-point Charter calling for voting reform, was the last major armed rebellion in mainland Britain. As the Times of the day reported, several thousand Chartists had marched from across South Wales into Newport. Sources suggest they were demanding the release of fellow Chartists imprisoned in the Westgate Hotel. When they surrounded the hotel, troops and special constables fired on them, leaving 22 dead and many more wounded.

The Chartist leaders, including Frost, were convicted of high treason and sentenced to be hung, drawn and quartered. But after protests from all over the country, the sentence was reduced to transportation for life. Other uprisings were also planned in Sheffield, the East End of London and Bradford.

The Chartist movement represented the culmination of an extraordinary political, cultural and intellectual ferment that affected broad sections of the British working class in the decades that followed the French Revolution. Trotsky insisted that it was in Chartism that the working class had to see “not only its past, but also its future.”

“The era of Chartism is immortal in that over the course of a decade it gives us in condensed and diagrammatic form the whole gamut of proletarian struggle—from petitions in parliament to armed insurrection.… As the Chartists tossed the sentimental preachers of ‘moral force’ aside and gathered the masses behind the banner of revolution so the British proletariat is faced with ejecting reformists, democrats and pacifists from its midst and rallying to the banner of a revolutionary overturn,” Trotsky explained.

This is precisely why big business and a party committed to the defence of big business, Labour, was so keen for the mural to be destroyed.