The Dow Jones Industrial Average stock index broke 16,000 for the first time Monday before falling back slightly to a new record close of 15,976. The index has set new records in six of the last seven trading sessions and is up by 26 percent over the past year, having doubled since 2009.

As the Wall Street Journal noted, "It took the Dow 136 trading days to notch its latest 1,000-point gain. That is the sixth-fastest rally of that magnitude in history."

The other major US stock indexes are likewise booming. The Standard & Poor’s 500 Stock Index broke 1,800 for the first time ever in intraday trading Monday and is up by 31 percent over the past year. The NASDAQ has gained even more, rising 38 percent over the same period.

Throughout the world, stocks are surging. The FTSE All-World Index hit its highest levels since 2007 on Monday. Over the past year, Japan’s Nikkei is up by 67 percent, Germany’s DAX has climbed 33 percent, and Britain’s FTSE 250 has soared 32 percent. 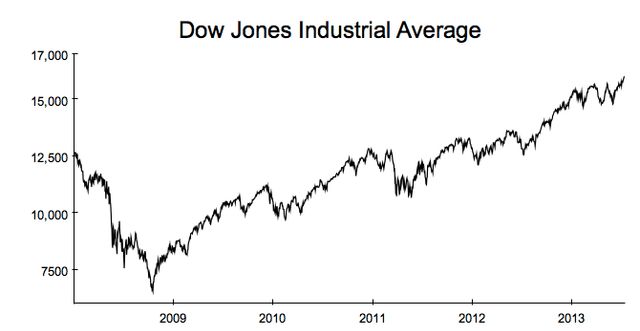 The most remarkable aspect of this bull market is that it occurs in the context of stagnant economic growth or recession in the US and Europe and signs of a slowdown in much of Asia and Latin America. Just last week, the European Union published figures showing that growth in the euro zone was essentially flat in the third quarter of this year, while consumer prices rose at the slowest level since 2009, pointing to major deflationary pressures.

More than five years after the financial crash of September 2008, the real economy in most of the world remains mired in slump and mass unemployment. There is no recovery for the vast majority of the planet’s population.

How is the unprecedented stock market boom to be explained? It is the intended outcome of a policy being pursued by the governments and central banks of the major powers to pump virtually unlimited quantities of cash into the financial markets, in order to bail out and further enrich the financial elite.

Earlier this month, the European Central Bank announced that it would slash its benchmark interest rate from 0.5 percent to a record low 0.25 percent, and hinted that it might seek to drive the rate below zero.

On the other side of the Atlantic, the nomination of Janet Yellen to replace outgoing Federal Reserve Chairman Ben Bernanke, which is moving through Congress with virtually no opposition, has sent a clear message that the US central bank intends to continue and possibly expand its trillion-dollar-per-year money-printing operation. 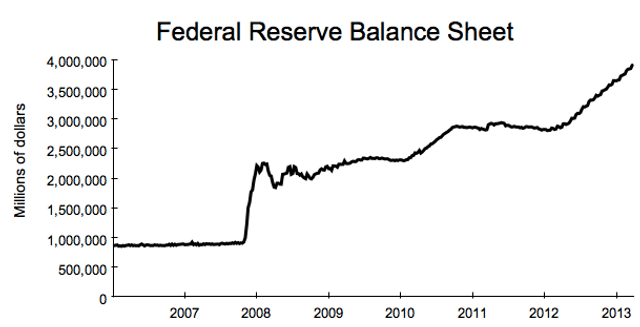 To pay for the historically unprecedented subsidy to the banks—in the form of cash bailouts, near-zero interest rates and the money-printing operation known as “quantitative easing”—national treasuries are being looted and the full burden of the resulting budget and debt crisis is being imposed on the working class, in the form of austerity measures, mass layoffs, wage-cutting, and the destruction of pensions, health care and public education.

A redistribution of wealth from the bottom to the very top is taking place on a scale never before seen in history. But the resulting financial bubble, resting on an almost dormant real economy and growing poverty and inequality, is unsustainable. In response to the financial crash of 2008, produced by the bursting of a massive housing and credit bubble, the ruling class has engineered an even bigger bubble.

Already, the central banks’ policies are exacerbating global tensions and creating rifts between major powers. Money-printing and near-zero interest rates in the US and Europe are undermining global currency relations, fostering competitive devaluations and igniting trade conflicts. Within Europe, the recent interest rate cut by the European Central Bank provoked a split between Germany, the Netherlands and Austria, on the one side, and France and the southern European countries on the other.

Tensions between the US and Europe are mounting. Earlier this month, the US Treasury took the extraordinary step of denouncing Germany’s export-driven policy and its trade surpluses in the Treasury’s semi-annual report on currency policy, which usually focuses its fire on China.

Despite the Federal Reserve's talk of seeking to foster a “robust recovery” and lower unemployment, the cash it is handing out is going directly into the coffers of the banks and the super-rich. The Fed is underwriting record stock prices, record corporate profits, and record CEO pay.

The combined net worth of the world’s billionaires has doubled since 2009, according to a report published earlier this month by UBS Bank and Wealth-X, and the total number of billionaires has grown from 1,360 to 2,170. This has taken place even as the incomes of the bottom 95 percent of the US population have dropped in real terms.

The chasm between the rich and super-rich at the top and the rest of mankind is growing ever wider, the inevitable result of the policies of the Obama administration in the US and capitalist governments—whether nominally “left” or conservative—all over the world.

The other side of the diversion of public resources to the financial elite is a policy of social counterrevolution toward the working class. The impoverishment of the workers in Greece has set the standard for attacks against workers internationally.

The US government has just carried out the first-ever nationwide reduction in food stamp benefits and imposed tens of billions of dollars in “sequester” cuts. It is preparing to end extended unemployment benefits at the end of this year, followed by historic cuts in the basic social programs left over from the New Deal of the 1930s and the Great Society of the 1960s—Social Security, Medicare and Medicaid.

The ever-widening gap between the super-rich and the broad mass of working people—summed up in the rise in stock prices and corporate profits alongside record poverty and continuing mass unemployment—is a socially combustible situation. It is preparing the eruption of a new period of revolutionary class struggles.

The burning issue for the working class is the need to build a new leadership—entirely independent of and opposed to the old trade union apparatuses and all of the parties of the ruling class—that will arm the coming struggles with a socialist program to reorganize economic life to meet social needs, not private profit.