Victimized workers from Maruti Suzuki’s Manesar car assembly plant staged a two-day dharna (sit-in) in Gurgaon, Haryana on Dec. 20th and 21st to rally opposition to the witch-hunt that the company, police and Congress Party state government have jointly mounted against them.

The protesters demanded the immediate release of 148 workers who have been jailed for the past sixteen months on murder and other frame-up charges. They also called for the reinstatement of 2,300 workers whom the company arbitrarily sacked in September 2012.

The protest was joined by relatives of many of the jailed workers. It had been timed to coincide with the resumption of the murder trial of the 148 workers. However, the authorities chose to postpone the second day of trial testimony to January 24.

India’s largest carmaker, Maruti Suzuki used a company-instigated altercation at its Manesar plant on July 18, 2012 in which Human Resources Manager Awanish Kumar Dev was killed to mount an all-out campaign to smash resistance to its brutal, cheap-labour work regime. In this it has received full support from Haryana’s Congress Party state government.

Using lists supplied by company management, Haryana police arrested almost 150 workers in the weeks following the July 18, 2012 altercation and thereupon subjected them to beatings and torture in an attempt to terrorize them into making false confessions. (See “Jailed Maruti Suzuki workers subjected to torture”)

The jailed workers include the entire leadership of the Maruti Suzuki Workers Union (MSWU)—an independent union formed in 2011 in opposition to a company-stooge union and which led a militant campaign of strikes and plant occupations—and many of the MSWU’s most active members.

The company, again with the state government’s support, also used the altercation as the pretext for purging its workforce. In September 2012, it dismissed over 500 permanent and 1,800 contract workers.

In the ensuing 16 months, the company-state campaign against the Maruti Suzuki workers has continued. Scores of police are stationed inside the Manesar car assembly plant every workday. At the government’s behest, police have repeatedly attacked and declared illegal protests mounted by the victimized Maruti Suzuki workers.

On Dec. 17, Iman Khan, a member of the Provisional Working Committee that was formed to lead the MSWU after the entire elected leadership was swept up in the July-August 2012 police dragnet, was released on bail after almost a year in jail. Khan had been arrested last January 24 just as he was about to speak to a press conference, on the spurious claim he was readying to incite violence.

The government and state authorities are determined to inflict exemplary punishment on the Maruti Suzuki workers: so as to reassure big business that they will stamp out any challenge to sweatshop conditions; and so as to intimidate workers in the huge Gurgaon-Manesar industrial belt—which has emerged as a major center of auto production over the past two decades—and across India.

Revealingly, in denying bail to the jailed Maruti Suzuki workers, a Harayna High Court judge justified his decision by warning that “foreign investors are likely not to invest the money in India out of fear of labour unrest.”

The December 20-21 protest began with victimized Maruti Suzuki workers and their supporters congregating outside the District Court, then marching a short distance to the Gurgaon District Commissioner’s (DC) Office. They then sat down on the road outside the DC Office. Many remained until the afternoon of the 21st despite frigid night-time temperatures. 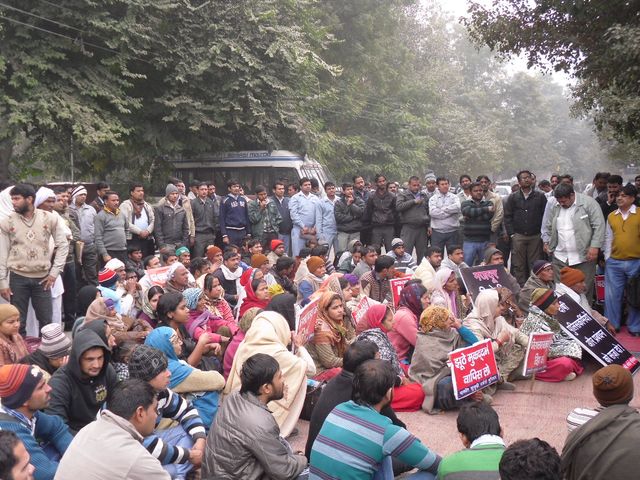 Many family members of the jailed workers traveled long distances to participate in the sit-in outside the Gurgaon District Commissioner's office.

But it is the Stalinist unions and parliamentary parties who have systematically isolated the Maruti Suzuki workers in their struggle against the government-company vendetta, reprising the role they played during the Manesar workers’ strikes in 2011. While mouthing pledges of solidarity, they have opposed any effort to mobilize the working class in defence of the Maruti Suzuki workers and instead have urged them to focus their energies on appealing to the Haryana Labour Department and Congress-led governments in Haryana and New Delhi to intervene on their behalf with Maruti Suzuki management.

Despite their criticisms of the central unions, the MSWU Provisional Committee, under the political influence of the Stalinists and trade-unionist conceptions, is pursuing essentially the same path of appealing to the Haryana government and the political establishment. Yet the experience of the Manesar Maruti Suzuki workers has demonstrated that the entire capitalist elite—its political parties, police and courts—are implacably opposed to the workers’ struggle against contract labour and sweatshop conditions, and for genuine representation.

To defeat the company-state conspiracy against them, the victimized Maruti Suzuki workers must base their struggle on the independent political mobilization of the working class in India and internationally. The fight against the frame-up and in defence of the purged workers must be linked to the development of a working-class counteroffensive against contract labour, speed-up, and sweatshop conditions across India and animated by the recognition that the rights of the working class can only be secured through a political struggle for workers’ power and against the entire profit system.

The World Socialist Web Site spoke to some of the relatives of the jailed Maruti Suzuki workers who participated in the December 20-21 protest in Gurgaon.

Most of the workers, we learned, are in their 20s or early 30s and come from poor village families. 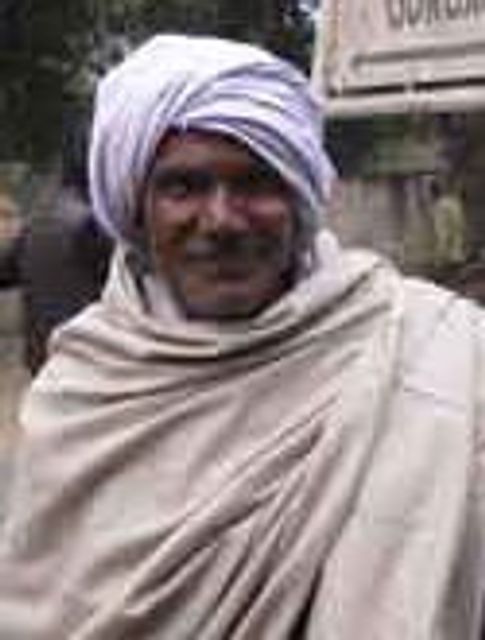 Ram Pal, father of jailed Maruti Suzuki India (MSI) worker Jialal, told the WSWS: “In order to get rid of the militant workers the MSI management has killed its own manager Awanish Dev and turned the case against workers! But the workers did nothing to the manager. My son was charged as chief accused in the case and he was among those brutally beaten up by the police. It was the management who provoked the altercation on July 18 and for whatever happened workers were blamed for it. However the main accused is the MSI management. I don’t believe in the government and the courts.”

The father of Ram Sabad, another jailed MSI permanent worker, is, like all the relatives of the imprisoned workers, very apprehensive about their fate. A small farmer from Samsepud village in the Jompur district of eastern Uttar Pradesh, he travelled several hundred kilometres to join the Dec. 20-21 protest in Gurgaon. 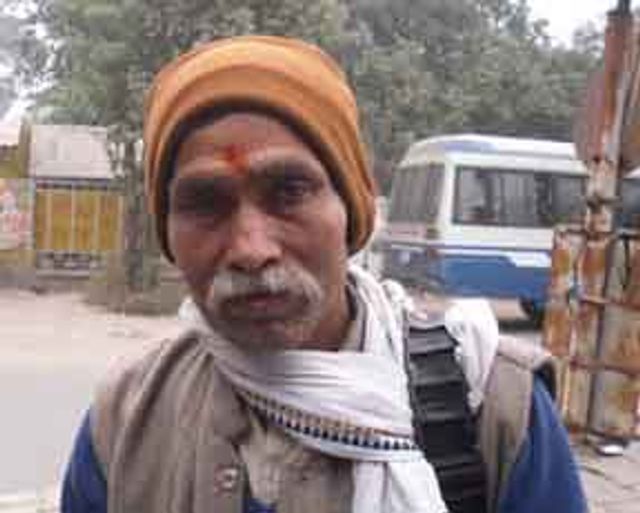 “Ram,” his father explained, “is married and has a baby daughter. My daughter-in-law also came along today with the child to participate in this protest. Once a month we all come to see Ram when he is brought to the Gurgaon district court.

“My son completed his technical diploma course ITI in Lucknow (Uttar Pradesh) and worked in Tata Motors as an apprentice. Then he joined the Maruti Suzuki company and worked there for eight years. He was made a permanent employee only two years ago.”

On the refusal of the courts to grant bail to his son and more than 140 other workers he said, “Normally when a person is facing such a murder charge they can get bail after six months of imprisonment. But my son and others have been in prison for almost 18 months now and they are still denied bail. And that is on the charge of a killing in which more than a hundred other workers were allegedly responsible!”

We also spoke to Balwant Singh, the brother of jailed MSI worker and MSWU President Ram Meher. Meher is married and has two children, 5 and 8 years old. He comes from Guliana village in Haryana’s Kaithal district. “There is a conspiracy to frame up the MSI workers,” said Singh. “When the management wanted to increase the rate of exploitation, workers revolted against lower wages and demanded a wage hike.” 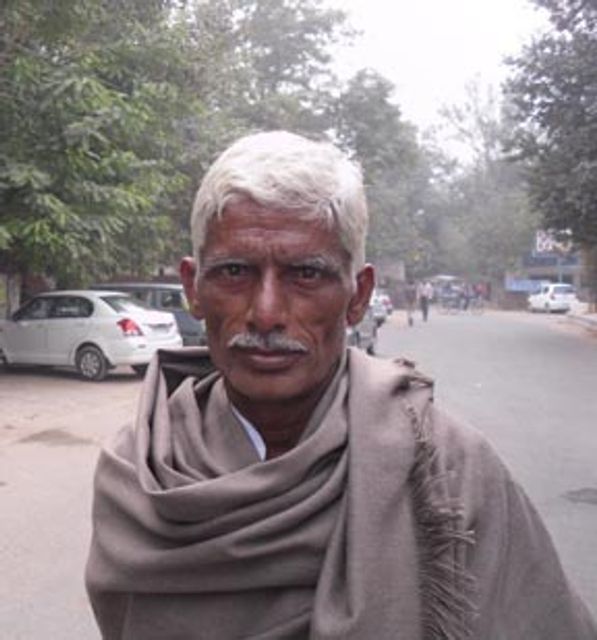 Worried about Ram Meher’s health, his brother said: “I saw him in jail. He looks very weak. There are no basic facilities in the jail. Whenever we go to see him in jail we take food for him but the authorities won’t allow us to give him the food.”

Scoffing at political parties he said, “Not a single party supports the Maruti Suzuki workers. All parties are against workers. When the families of jailed workers took part in a protest demonstration in Kaithal in last March, they, including women and children, were cruelly beaten up by the police. Eleven persons were arrested and released only after two months in jail.”