The letter published below has been sent by the International Youth and Students for Social Equality to the University Board of the Humboldt University in Berlin.

The International Youth and Students for Social Equality (IYSSE) at the Humboldt University call upon the University Board to censure Professor Jörg Baberowski’s abuse of his authority.

Baberowski had invited Service to a colloquium of the Department of History of Eastern Europe to which, according to the History Department’s web site, “all interested parties are warmly welcome.” But after the Partei für Soziale Gleichheit (PSG—Socialist Equality Party) and the IYSSE distributed leaflets and organized a well-attended meeting pointing out that Service’s biography of Trotsky had been described by a leading journal and internationally recognized historians as a “piece of hack work,” Baberowski responded with measures normally associated with a police state. 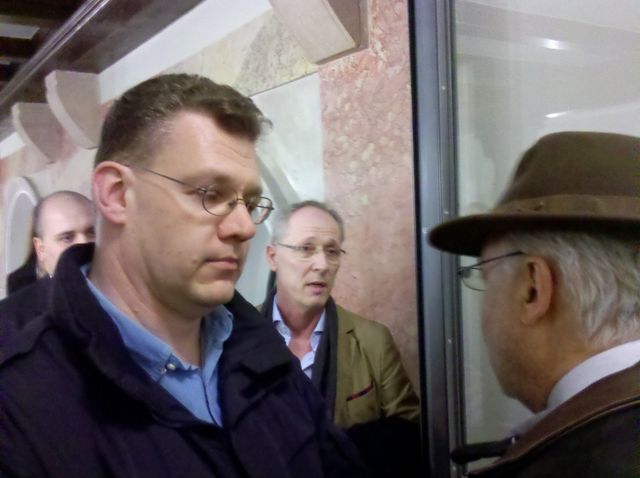 To prevent any critical questions being asked of Service, Baberowski cancelled without advance notice the colloquium. No reason was given for this action. Moreover, those who had come to the officially announced location were treated in a completely dishonest manner. The public was not told that the meeting had been moved to another location. The new address was revealed only to a small number of associates and students of Baberowski, none of whom was likely to raise any objections to Service’s hack work.

However, when the new address of the meeting became known, several members of the public made their way to the new location—a room within the main building of the University. There, they were confronted with an extraordinary scene.

Professor Baberowski stood at the entrance to the meeting room, flanked by security personnel. Every member of the public was interrogated by Baberowski, who demanded to know who they were and why they were attending the meeting.

In flagrant violation of freedom of speech and opinion, Baberowski imposed political criteria to determine who would be allowed to attend a publicly announced meeting that was being held on the premises of the university. Anyone whom Baberowski suspected of harboring differences with Service was not allowed to enter the university meeting room.

Those denied entry included David North, the chairman of the American Socialist Equality Party. North, who has been a leading figure in the international socialist movement for 40 years, is the author of In Defense of Leon Trotsky, an internationally acclaimed book that exposed the errors and falsifications in Service’s biography. When North identified himself, Baberowski shouted rude anti-communist insults and threatened to call the police.

Professor Mario Kessler of the University of Potsdam, an internationally recognized historian, who, together with 13 other historians, had written an open letter protesting the publication of the German edition of Service’s biography of Trotsky, was also barred entry. A number of Humboldt University students who had attended the IYSSE event dealing with Service’s biography were also prevented from attending the meeting.

The behavior of Baberowski was a shocking violation of democratic procedures and the tradition of free and open discussion at public meetings at the university. There had been no threats to disrupt the event.

The Partei für Soziale Gleichheit had published its objections to Service’s biography, and even sent him a list of questions to facilitate the discussion. In two letters to Baberowski, the PSG had given an assurance that it would “of course, respect the framework of the colloquium.” Moreover, members of Baberowski’s department had attended the IYSSE meeting just four days earlier and were allowed to ask any questions without any restrictions.

Baberowski’s authoritarian measures were aimed exclusively at suppressing criticism of Service’s discredited biography. An atmosphere of intimidation prevailed at the colloquium, to which only 30 participants were admitted. It took place in a bunker-like room, whose doors were locked from inside, with several security guards posted outside. When, despite all these precautions, a critical question was raised, Baberowski told the questioner to stop talking!

Baberowski’s behavior was an attack on democratic rights and violated all the norms of appropriate conduct at an academic institution. The only reason for his exclusion of students and historians from his meeting was the fact that they had criticized a book!

Baberowski wanted to ensure that Service’s discredited work would not be challenged, and to this end launched an assault on free expression at the university. With his action, Baberowski has created a precedent for political censorship.

In his most recent book, Verbrannte Erde (Scorched Earth), Baberowski maintains that the source of the ruthless Stalinist regime is to be found in the dictator’s psychology. However, an examination of Baberowski’s own behavior provides a far clearer insight into the source of political violence. The aim of the Stalinist dictatorship was the suppression of ideas that challenged the regime. This is an ambition that Professor Baberowski is well suited to understand. When he is challenged by ideas that he does not like and cannot answer, Baberowski resorts to censorship, security guards and threats to call the police.

A leaflet circulated by the IYSSE among students asked the question: “Why has Professor Baberowski invited Robert Service to Humboldt University?” This question can now be answered. Baberowski is utilizing his position at the university to advance the notorious right-wing conceptions of Ernst Nolte, who for three decades has been associated with writings that seek to relativize and diminish the significance of Nazi crimes.

On February 10, the news magazine Der Spiegel published a lengthy article by Dirk Kurbjuwelt dealing with attempts to rewrite German history. Baberowski, an ardent defender of Nolte’s views, plays a prominent role in this campaign. He is quoted by Der Spiegel saying: “Hitler was no psychopath, and he wasn’t vicious. He didn’t want people to talk about the extermination of the Jews at his table.”

In Der Spiegel, Baberowski explicitly defends Nolte. “Nolte was done an injustice,” he told the news magazine. “Historically speaking, he was right.”

But in what regard, one must ask, was Nolte “right?” Der Spiegel quotes statements from the now 91-year-old Nolte that are normally associated with neo-Nazi publications. He stated:

“I am more and more convinced that we should attach more weight to the role played by the Poles and the British than is usually the case. Hitler did not want to wage war for war’s sake, as is often claimed. He would have liked to enter into an anti-Soviet alliance with the Poles. His claims against Poland were not ‘national socialist.’ Rather, they dated back to the days of the Weimar Republic. If the Polish government had sent a negotiator, as Hitler wanted, and had agreed to the ‘Weimar’ demands to return Gdansk to the German Reich and to establish extraterritorial road and rail connections through the ‘corridor,’ Hitler would not have invaded Poland.”

Nolte accuses Jews of co-responsibility for Auschwitz because some Bolsheviks were Jews and therefore had their “own share of the ‘gulag.’” Der Spiegel states bluntly that such claims “have long been an argument of anti-Semites.”

We leave you to draw your own political conclusions.

Service’s mendacious hack work fits into this picture. In order to lessen the guilt of the Nazis, the Russian October Revolution is denounced as a criminal act, and Trotsky, the most important Marxist opponent of Stalin, is demonized.

The attempts to establish a historically false narrative come at a critical point in German history. Such efforts should be seen in the context of recent statements by President Joachim Gauck and Foreign Minister Frank-Walter Steinmeier that it is now time to end decades of military restraint in Germany. The revival of German militarism requires a new interpretation of history that downplays the crimes of the Nazi era.

A specific policy requires specific means. Baberowski’s behavior on February 12 has shown that such a revision of history can be achieved only through intimidation and the suppression of dissent.

Baberowski’s attack on basic democratic rights and academic freedom serves the aims of those forces who would like to transform the Humboldt University into a center for right-wing and militaristic propaganda. It is well known that Baberowski has close links with the Hoover Institution at Stanford University, which is an academic center of right-wing politics in the United States.

Students have no desire to see Humboldt University transformed into a sort of “Hoover Institution on the Spree.” They want the university to remain a center of scientific and academic discourse, rather than a right-wing think tank that muzzles all critical opinions.

Professor Baberowski should be called to order. It is impermissible that democratic rights and free academic debate should be treated with disdain at a university named after a leading representative of the Enlightenment and located just a few dozen meters from the square where the Nazis burned books in 1933.

Wolfgang Weber, on behalf of the International Youth and Students for Social Equality

Leon Trotsky and the Post-Soviet School of Historical Falsification