Chronic truck backups at the Port of New York and New Jersey have ballooned into nightmarish delays over the past several weeks, sparking anger and job action by port truckers. This month truckers have repeatedly endured wait times several hours long to drop off and pick up cargo at the port. For drivers, a majority of whom are paid by the trip rather than by the hour, these delays are leading to economic devastation. 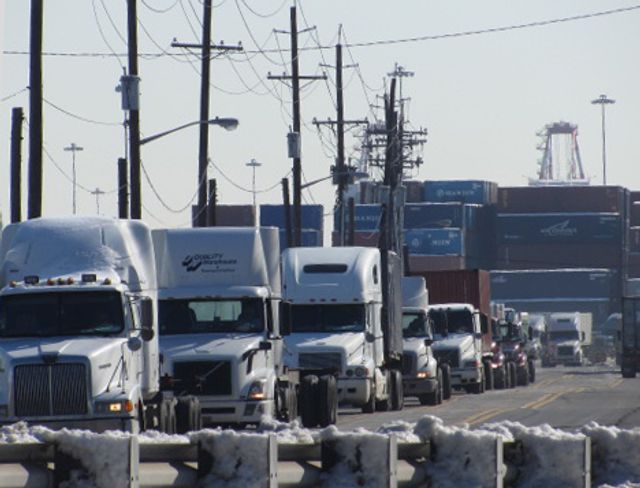 Long queues outside of the container terminals have been increasingly frequent since last summer, when the largest terminal operator botched the rollout of a computer system, bringing cargo movements to a near standstill. Since then, a combination of factors, including labor shortages on the docks, ongoing equipment problems and severe weather, have combined to cripple the flow of truck movement at the port. Heavy snowfalls and obstructions to hiring more longshoremen are blamed for triggering the recent delays. 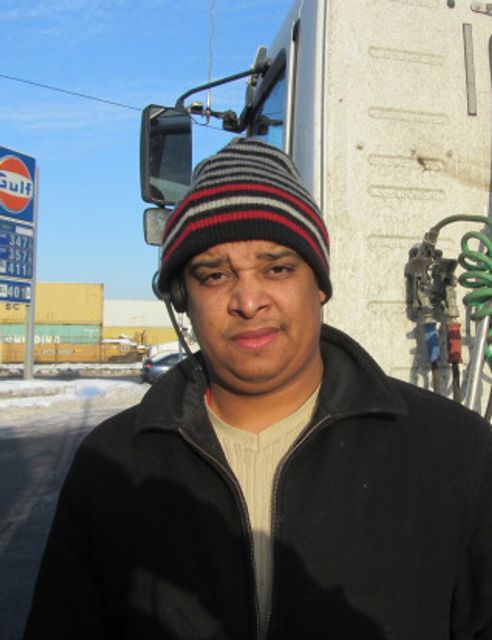 “The way the piers are now, you don’t make money,” Robin Rodriguez, a port truck driver for 16 years, explained. “The turnaround time for loading a container on a truck should be an hour at the most. But here it can sometimes be six or seven hours. You can’t make a living. If every day the port is this way then they should compensate the truckers.”

Robin added that in the first five or six years he made a decent living hauling port containers. “Now I am not. Fuel and tolls went up. Rates paid to us have not gone up. Companies say there is a bidding war for work and that it costs too much for containers. I work for a company. I was an independent. I am not happy. I liked being independent but I needed more steady work.”

Nelson Santiago, a port truck driver who had just been laid off after a workplace injury, recounted his recent experience: “It is abuse of workers. It takes three or four hours to get out sometimes. I went to Sealand [terminal] and it took me five hours.”

The current delays come on top of a ruinous past several years for drivers. The economic crisis wiped out thousands of truck jobs in New York and New Jersey as container shipments plunged, down by 15 percent in 2009 from the peak two years prior. Cargo volumes barely recovered by the time Hurricane Sandy hit in 2012. Flooding from the storm destroyed tens of thousands of trucks. Environmental rules banning older, heavily polluting trucks from the port added to the strain, forcing some truck owner-operators to purchase newer vehicles or find other work.

Even before the string on calamities hit, port drivers faced tremendous difficulty making ends meet. A survey conducted in 2008 by researchers at Rutgers University found that Port of New York and New Jersey truck drivers earned very low wages and few, if any, benefits. The situation was somewhat worse for owner-operators, who work as contractors for trucking companies. Approximately three-quarters fall into this category, earning on average less than $10 an hour (about $2 an hour less than company drivers), based on making two to three port trips per day. Given the current congestion at the port, three trips a day is nothing more than a fading memory.

Anger among drivers over lost income and deplorable working conditions has begun expressing itself in moves towards strike action. A port drivers’ Facebook forum contained several posts and photos of drivers refusing work on February 17 in protest. While the action did not appear to have a significant effect on overall port operations, it points to the growing unwillingness of drivers to tolerate what has become an unbearable situation.

Similar conditions exist at ports throughout the United States. Late last year drivers at the Port of Oakland held a series of one-day strikes and protests, demanding pay for time spent waiting in long queues and more assistance to fund mandatory truck replacements.

In the face of this, the Teamsters are offering their services to contain the threat of any possible explosion. The union joined with environmental organizations in pushing through rule changes in 2008 at the Port of Los Angeles to require employee drivers, instead of independent contractors, as part of a diesel pollution reduction program, and it attempted the same at the Port of New York and New Jersey. However, the effort, which could have opened a pool of workers for potential unionization, was struck down in federal court. Lately the strategy has shifted to legal challenges and legislation aimed at reclassifying truck driver contractors as employees.

Far from waging a genuine fight to improve conditions for truck drivers, the Teamsters and their allies in the Democratic Party conceive of their role as a lucrative partnership with industry to continue to transfer wealth from workers to the corporate elite. Where the Teamsters have maintained a presence, they have continually demonstrated their ability to force through massive concessions. For example at YRC, one of the largest less-than-truckload carriers in the country, the Teamsters have overseen a workforce cut in half since 2006, and collaborated with the company in January to push through a five-year extension of drastic wage and pension cuts.

The prevailing conditions of poverty-level wages and lack of health care and retirement benefits in the port trucking industry is a direct consequence of the bipartisan policy of deregulation initiated by President Carter in 1980. In industry after industry, regulatory impediments to big business reaping enormous profits were removed at the expense of workers. In the shipping industry today, giant retailers like Walmart, Target and Home Depot are able to control shipping prices and ensure cut-throat competition that leaves drivers with next to nothing.

The restructuring of the industry has also led to a situation where the income of truck drivers is dependent upon speed-up of longshore workers. This feature has been exploited to pit drivers against longshoremen. In order to obscure the fact that the low pay and poor conditions of truck drivers is a consequence of an economic structure designed to exploit them, the blame is placed on “lazy” and “greedy” longshore workers.

While dockworkers do typically earn more than truck drivers, their jobs have been under continual attack as port terminals move towards greater automation. Between 1970 and 1986 alone, the number of dockworkers at the Port of New York and New Jersey declined by over 75 percent. The contract signed last year by longshore workers mandates productivity gains, reduces the size of work gangs, and pushes early retirement for older workers, to be replaced by less costly new hires.

Truck drivers, while expressing some antagonistic sentiments towards longshoremen, also pointed to the growing levels of inequality more broadly. Claude, an independent trucker, remarked, “The lines of trucks waiting to load are backed up all the way to the turnpike. You have to wait hours for [the longshoremen] to give you a chassis. They sit behind their windows and yell ‘What d’ya want?’ They slow down probably to get overtime. They slow down so they don’t get laid off,” Claude said, adding, “The big problem is they want the rich to be richer and the poor poorer. The rich are the main enemy.”

“I don’t agree with how all these CEOs are making such great bonuses,” Robin Rodriguez added. “I don’t understand it. There are more workers and poor than the rich. Eventually they will fight back. Do they want chaos?”