Forbes magazine published its 28th annual list of the world’s wealthiest individuals and families on Monday. In all, the research team behind the Forbes Billionaires list found a total of 1,645 billionaires worldwide as of February 12, with a combined net worth of $6.4 trillion, an increase of $1 trillion from 2013. The number of new billionaires, at 268, was the highest figure in the report’s history.

A surge in equity markets resulting from the ultra-loose money policies of the US Federal Reserve pushed the total number of American billionaires to 492, the highest of any nation. China, the foremost cheap labor platform in the global economy, boasts the second highest number of billionaires at 152. The Russian Federation, politically dominated by a narrow layer of compradors who liquidated the USSR and plundered its state assets in 1990-91, rounded out the top three nations, with 111 billionaires. 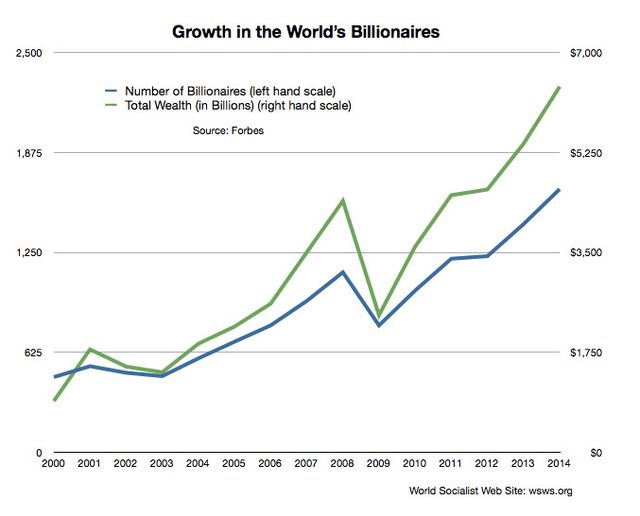 Around 100 people lost billionaire status, including 19 in Turkey, where a reversal of foreign investment flows has dashed the stock indexes and the currency, as have eight individuals in Indonesia due to the same global financial imbalances caused by the US Federal Reserve’s policies. Algeria, Lithuania, Tanzania and Uganda all saw their first appearances on the Forbes list, and Nigeria’s Aliko Dangote became the first African to make the top 25, with a fortune of $25 billion.

Microsoft founder and charter school champion Bill Gates has become the wealthiest individual in the world once again, with a yearly growth in his personal fortune of $9 billion and a total net worth of $76 billion, a sum more than four times larger than the entire municipal debt of the city of Detroit, or, stated another way, enough money to pay for four years of state college tuition in the US for 2.1 million students.

Other Internet-related persons featured prominently on the Forbes list, including Facebook CEO Mark Zuckerburg, whose fortune nearly doubled this year from $15.2 billion to $28.5 billion. Zuckerberg was the year’s biggest dollar gainer thanks to the soaring value of Facebook shares, which increased over 130 percent in the last 12 months. Facebook’s COO Sheryl Sandberg made the list as well, as did the company’s vice president Jeff Rothschild.

The year 2013 saw windfall compensation for executives of top private equity firms, cashing in on record share values and awarding generous dividends to their investors and to themselves. A Wall Street Journal article this week, headlined “Blowout Haul for Buyout Tycoons , ” examined public filings for Apollo Global Management LLC, Blackstone Group LP, KKR and Co., and the Carlyle Group LP. The article reports that the nine founders of these firms took in a total of $2.6 billion in 2013, a year-on-year increase of more than 100 percent. This amount averages over $160 million for each of the executives in question, enough to pay the starting salary of nearly 3,500 public school teachers in New York City for one year.

Of this elite, parasitic group, Leon Black, the co-founder and chief executive of Apollo Global Management, raked in the most at $546.3 million, followed by Blackstone Group’s Stephen Swarzman with $465.4 million. The three co-founders of Washington, DC-based Carlyle Group pocketed a total of nearly $750 million, more money than was spent on all of the district’s capital outlays for public schools between 2005 and 2008. Unlike the corporate giants of a previous era, which at least built railroads, factories and infrastructure, the highly profitable private equity funds that nourish today’s robber barons excel in the wholesale dismantling of entire sections of industry, buying companies or public entities, laying off the bulk of their workers, and then selling them at a profit as “competitive” enterprises.

The exploding fortunes of the world’s richest people in the last decade and a half are a consequence of a deliberate assault on the living standards of working people, including the slashing of social spending, declining real wages and almost unprecedented layoffs. A number of striking figures illustrate this fact:

* The world’s 85 richest people have more wealth than the poorer half of the world’s population combined. Some 2.4 billion people live on less than $2 per day.

* In the United States, 95 percent of all income gains between 2009 and 2012 went to the wealthiest 1 percent of the population. The proportion of income held by this layer has grown by nearly 150 percent since 1980. New records for unemployment, inequality and social misery are set on a regular basis.

To juxtapose the enormous and growing opulence at the top of society on the one hand, with the increasingly wretched, untenable position of most of the world’s population on the other, is to pose the necessity of socialism. Plainly said, society cannot afford the financial aristocrats, who make the feudal monarchs of the past look modest by comparison.