Impact of fire in Valparaiso, Chile, fueled by poverty, inequality

“The perfect conflagration” is what newspapers in Latin America and Spain are calling the firestorm that hit Valparaiso: a uniquely precise set of circumstances that combined to set fire to the hilltops that surround this historic port city.

It is now clear that the conditions of life to which people have been reduced on the hills of Valparaiso combined with the vector climatic factors­­­—a prolonged drought, wind direction and speed, plus high temperatures­­­—that made this firestorm “perfect.” 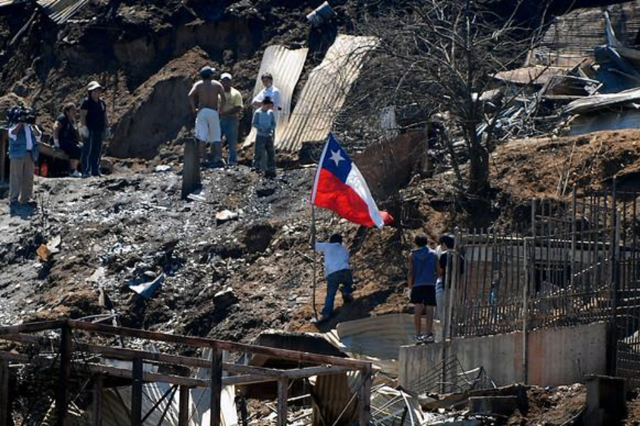 Lacking even the most minimal garbage collection services, the ravines in these hills became garbage dumps that are now feeding the fire, as are old and dilapidated wooden and tin homes. The flames were abetted by the lack of a minimal system of water hydrants, narrow roads, and difficult access.

A firefighter on duty at a forest fire watchtower made the first report of the fire at 6:12 p.m. on Saturday. Valparaiso investigators strongly suspect that the blaze originated with 12,000-volt power lines downed by the wind, and that poor maintenance was a factor. According to this scenario, birds, burning from the short-circuited power line, fell on remains from last month’s harvest of eucalyptus trees. Power line regulations require no vegetation within 15 meters (50 feet) of the path of the lines, but according to one report, the rule was not well enforced, and no clearing took place over the last two years.

Significantly, four years ago, in the same forest, strong winds had caused the power lines to come into contact with each other and ignited a fire.

Chilquinta, the electric company that operated the line, rejects the above account. However, a report in the Santiago daily El Mercurio pointed out that police investigators took note of burned trees within the 15-meter zone.

On Sunday evening, new flames had erupted in Ramaditas Hill, one of the most impoverished of the affected neighborhoods, adding to those hills that were originally on fire. New evacuations took place on Monday. On Wednesday, authorities reported that the fire had been contained but not fully extinguished.

According to Wednesday’s numbers, there are now 12,500 victims; 15 are dead, more than 500 injured. Some 2,900 homes have been damaged or destroyed. The fire has consumed approximately 1,100 hectares (2,700 acres). A smoky atmosphere is affecting the entire city.

Refugees describe harrowing experiences after the fires, driven by 40-kilometer (25-mile) winds, hit their homes on Saturday night. Their lights went out as their propane tanks exploded. People were forced to flee in the dark. Across Chile, people saw images of a stream of people descending the burning hills carrying the elderly and the very young­­­—many with burns.

Alfredo Mascareño, an official in charge of the firefighting operation, estimated it could take 20 days to fully extinguish the fire. Even in areas where the fire is dormant, a slight breeze can fan it back to life. In Valparaiso, and across Chile, government authorities and non-governmental organizations are collecting clothing for the more than 10,000 refugees that have been evacuated. A massive popular outpouring of help is coming in from every corner of the country, even from the areas affected by recent earthquakes. Some 15,000 volunteers, many of them young students, have also poured in to help with the cleanup and restoration. Many of those whose homes survived are taking in refugees.

At the same time, Valparaiso is an occupied city. Two-thousand Navy foot soldiers are patrolling the city, preventing the fire victims from camping out in parks and plazas and herding them into shelters and churches that are overwhelmed.

Housing Minister Paulina Sabali has declared that the government will help families rebuild. President Michelle Bachelet cancelled a trip to Argentina and Uruguay because of the crisis. “This is the worst fire in Valparaiso’s history,” said Bachelet.

The Chilean government accepted an Argentine offer of firefighting airplanes, to add to the 21 that have already been used over Valparaiso, with questionable results. 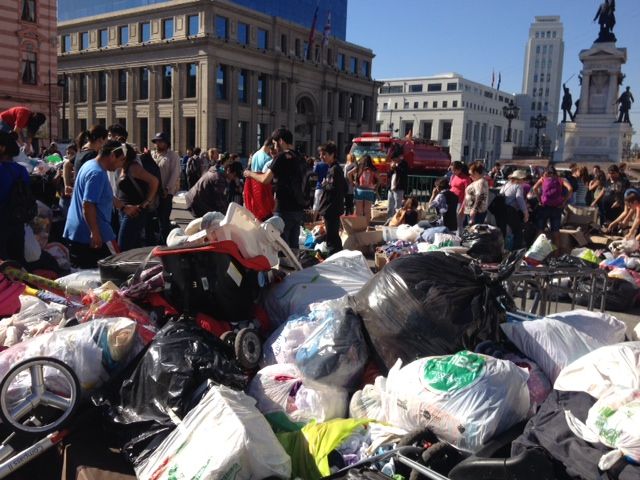 Poduje described how city authorities repeatedly ignored these warnings. Two fires in 2008 and 2013 swept through Santa Cruz and Rodelillo hills.

The latest warning took place in March 2013. Experts then warned of the fire potential on these hills; one month later, on April 23, the city was again on fire.

Valparaiso is not unique. A 2010 study by Poduje of 25 Chilean cities determined that 1.7 million Chileans­­­—10 percent of the country’s population­­­—live in urban settlements under “ghetto-like isolation, insecurity and poverty.”

He identified three communities, Alerce in the southern city of Puerto Mont, the Santiago Suburb of Bajos de Mena, and the city of Chimba Alto in the north. In those three cities, more than 200,000 people live in “conditions of misery.”

A map of greater Valparaiso, including the adjoining cities of Viña del Mar and Concon, home to 600,000 inhabitants, reveals a rigid class division: the wealthy occupying the coastal areas in the central region, and the poor occupying the heights at the north and south of the city.

A 1998 study of the region published in a national geography magazine (DIFERENCIACION SOCIOGEOGRAFICA INTERNA DEL GRAN VALPARAISO; Revista de Geografía Norte Grande, 25:33-47) identified “the main problems confronting metropolitan Valparaiso; the proportion of people in poverty, the housing deficit, the lack of basic housing services and the way that homes are built leaves inhabitants vulnerable to natural disasters and seriously hamper the quality of their lives. The metropolitan population is very conscious of the poverty and overcrowding, and of the environmental risk that affects its life.”

The digital newspaper El Mostrador quoted architect Sebastián Grey, who charged that Valparaiso and the central government had been indifferent to four decades of uncontrolled population growth in the city. “It may take a tragedy such as this to wake up the Chilean state to make a leap into the future,” added Grey.