One in five US children do not have enough to eat

Feeding America, the US national network of food banks, released its annual report on local food insecurity Thursday, showing that there are dozens of counties throughout the US where a third of children do not get enough to eat.

Forty-nine million people, or 16 percent of the population, lived in food insecure households in 2012, the latest year for which figures are available. This is up from 11.1 percent in 2007. The level of food insecurity among children is even worse, affecting a staggering 16 million children, or 21.6 percent.

“Food insecurity is higher than at any time since the Great Depression,” said Ross Fraser, director of media relations for Feeding America, the national network of charitable food banks. “One in six Americans live at risk of hunger, as do one in five children,” he added. 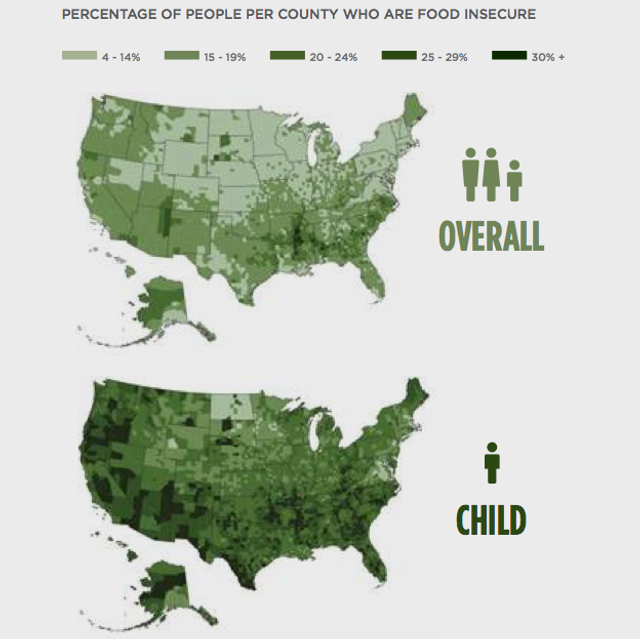 Broken down by state and county, the situation is far worse in many parts of the country. For instance, in Mississippi, 22.3 percent of the population, or almost one in four, are food insecure. So are 29 percent of children in New Mexico, nearly one third of all children.

There are sixteen states—including California, the most populous state in the country—where more than one in four children are food insecure.

Food insecurity means that a household does not “always have access to adequate amounts of food to maintain an active, healthy lifestyle,” Fraser explained to the WSWS. “Sometimes they’re either missing meals or fill their bellies with something that isn’t as nutritious as it should be, like a bowl of rice instead of a balanced meal.”

“When the recession hit, the number of food insecure people skyrocketed, from about 38 million people to about 50 million,” Fraser added. “Despite the proclamation that the recession is over, what this data shows is that people are having a very tough time making ends meet and securing enough food for themselves and their families.”

In the District of Columbia, home to the US capital, 28 percent of children live in food insecure households.

Rural poverty and hunger are pervasive. Four out of the five counties with the highest levels of food insecurity in the US were in rural Mississippi. Holmes County in the southern state reported 32 percent food insecurity, and Yazoo County reported a rate of 27 percent.

While hunger is most alarmingly high in inner cities and in rural America, Fraser warned that it is by no means confined to those areas. “Hunger exists in every county in America. This is a country where great wealth exists at the same time as great poverty.” He noted the example of Loudon County, an affluent suburb of Washington DC, where the local food bank reported that demand for food assistance has quadrupled.

The Feeding America report is based on the organization’s analysis of 2012 data published last year by the US Department of Agriculture. Other, less comprehensive surveys indicate that food insecurity has grown significantly since then. According to the US Conference of Mayors, demand for emergency food assistance in 25 major cities increased seven percent in 2013, following an increase of 22 percent in 2012.

In particular, Feeding America’s report does not take into account the impact of two consecutive cuts to food stamp benefits over the past six months. On November 1, 2013, Congress allowed emergency food stamps funding implemented in 2009 to expire, resulting in a reduction of $36 per month for a family of four. This was followed by $8.7 billion in cuts over 10 years signed by President Obama earlier this year.

The annual cut to food stamp benefits was $5 billion from the first cut alone, amounting to the entire operating budget of the Feeding America network. “It was like wiping out everything we do,” said Fraser.

Federal food stamp benefits now pay an average of $134 per month for individuals and $290 for families, or about $1.40 per person per meal. “Our food banks are where people go when they run out of food stamps,” Fraser said, noting that most people depleted their funds by the 21st of any given month.

Fraser also noted that a significant portion of people who visit the network’s food banks are employed, but do not make enough money to afford enough food. “They’re not able to make ends meet on low-wage jobs. You can’t even rent an apartment in the city limits of Chicago for what a minimum wage worker makes.”

The pervasive growth of poverty, hunger, and homelessness, is the result of the deliberate policies pursued by the ruling class since the 2008 economic crash. First under Bush and then Obama, trillions of dollars have been handed to Wall Street in the form of bank bailouts, followed by unending cuts in wages, benefits and social programs.

These measures have resulted in a historic redistribution of wealth, from the working class to the rich. Just last week, executive compensation research firm Equilar reported that the 100 top-earning CEOs in the US saw their median yearly pay increase by 9 percent in 2013, to $13.9 million each.

The US’s billionaires have seen their wealth double since 2009. The 400 richest individuals in the US now have a collective wealth of more than $2 trillion, or 400 times the annual budget of Feeding America and more than one billion times the average annual income for an individual on food stamps.