Cecily McMillan, a 25-year-old student and Occupy Wall Street activist, was taken away in handcuffs to New York City’s Rikers Island prison complex Monday after being convicted on trumped up charges of assaulting a policeman during a protest two years ago. 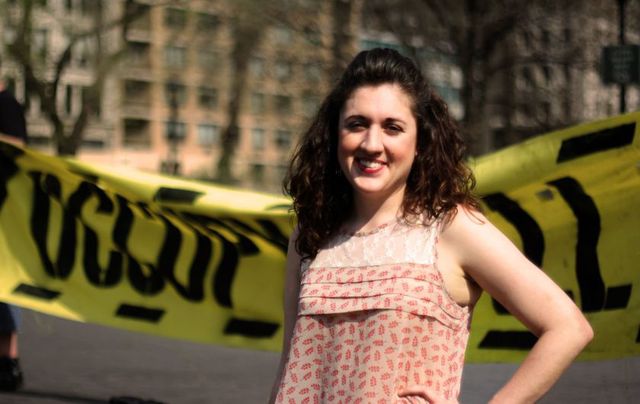 The trial was apparently the last for Occupy Wall Street protesters, nearly 3,000 of whom were arrested in a massive crackdown ordered by New York City’s then mayor, billionaire Michael Bloomberg, in 2011 and 2012.

McMillan, who was herself brutally beaten by cops and suffered a seizure in the March 17, 2012 incident, faces up to seven years imprisonment when she is sentenced on May 19.

“It would seem that the message that they are sending is don’t join with the dissenters or we’re going to come down on you like a ton of bricks,” McMillan’s attorney, Martin Stolar, told the WSWS Tuesday.

The verdict was handed down in courtroom ringed with guards, including some in riot gear. Supporters of Cecily McMillan shouted out “shame” when the judge denied bail and ordered her remanded to Rikers Island. They were forcibly made to sit back in their seats and then cleared from the courtroom. 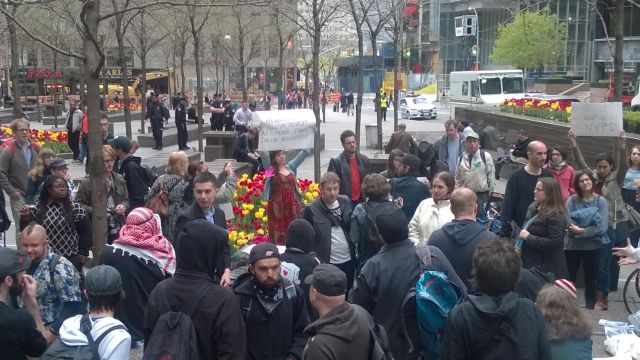 Demonstration in New York against the verdict

Later that evening, supporters of McMillan gathered for a protest in Lower Manhattan’s Zuccotti Park, the site of the original Occupy Wall Street demonstrations and of the six-month anniversary protest where McMillan was brutalized and arrested by police. 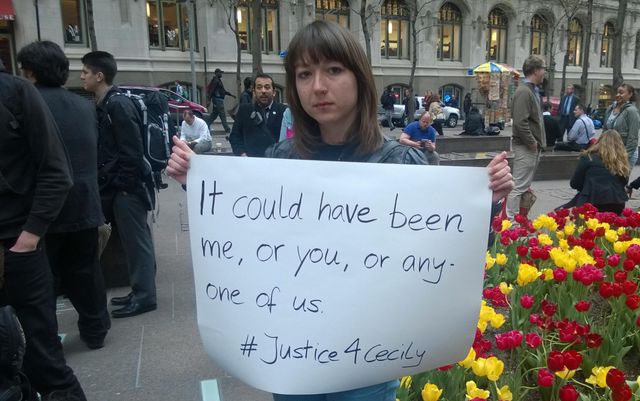 A sign at the demonstration in New York against the verdict

Hanging over the entire trial was the Orwellian atmosphere of a police state. McMillan, who suffered serious injuries and a seizure during the arrest and was left with post traumatic stress as a result of her encounter with the police that night, was cast as a criminal and an assailant. Meanwhile, one of the cops who attacked her, Police Officer Grantley Bovell, was portrayed as her innocent victim.

While the prosecution insisted that McMillan had deliberately struck the cop with her elbow, she insisted in her defense that she was grabbed from behind by her breast and reacted instinctively to ward off the assault.

Dismissing her testimony and that of other witnesses who had seen her brutal treatment at the hands of the police, as well a photograph showing severe bruising over her breast, where she said she had been grabbed, prosecutor Erin Cho said contemptuously that her account was “so utterly ridiculous and unbelievable that she might as well have said that aliens came down that night and assaulted her.”

In reality, there is ample videotaped evidence of police beating, knocking down and otherwise physically assaulting hundreds of demonstrators that night, including footage of McMillan herself convulsing on the ground as cops stood around and offered no assistance.

On the other hand, the main evidence presented by the prosecution was a dark and grainy 52-second video posted anonymously on YouTube that purportedly shows McMillan elbowing the cop. It is impossible, however, to see what happened beforehand to cause her reaction. In her closing argument, the prosecutor described the video evidence as “crystal clear,” prompting surprised laughter from reporters in the courtroom.

McMillan’s attorney, Stolar, said that he was “shocked and disappointed” by the jury’s verdict and even more appalled by the judge’s vindictive action in remanding his client to Rikers Island without bail.

A seasoned criminal defense attorney, Stolar said that the denial of bail was both rare and unjustifiable in A case like that of McMillan, who had no prior record, is not facing mandatory jail time and had made every scheduled appearance for two years.

“It’s punishment for having refused to accept a plea,” he said. While prosecutors had offered to accept a guilty plea from McMillan in return for a recommendation of no jail time, they refused to drop felony charges, which would have remained on her record for her entire life.

Stolar said that he is working on an appeal of the denial of bail to get Cecily out of Rikers Island, which he described as a “hell hole for anyone sent there,” and an appeal of the verdict itself.

Grounds for an appeal to throw out the verdict are substantial, he said. They include the refusal of the trial judge, Ronald Zweibel, to admit medical evidence on the injuries that McMillan suffered at the hands of the cops after her arrest and the preclusion of some witnesses prepared to speak about police conduct that night.

Also withheld from the jury was evidence relating to the abusive conduct of the cop she was alleged to have assaulted, who reportedly later the same evening smashed a protester’s head repeatedly into the steps of a bus used to transport those who had been arrested. Also kept out of the trial was the cop’s personnel file and evidence of prior acts of police brutality.

The defense attorney also questioned the use of the video as evidence sufficient to find anyone guilty beyond a reasonable doubt. “I’ve seen Facebook entries used as evidence and video from surveillance cameras, but this a first, the use of something posted anonymously on YouTube,” he said.

Apparently incensed by an innocuous comment made by Stolar to the New York Times during jury selection, the judge imposed a gag order on the defense attorneys throughout the trial.

Lawyers familiar with the judge’s record report that he is well known in the New York City courts as a “second prosecutor.” Zweibel has repeatedly been reappointed to the bench by both Democratic and Republican governors.

McMillan, a graduate student at the New School in New York, described herself in an interview with the Guardian newspaper as “absolutely terrified” by the prospect of prolonged imprisonment, but added, “People can take all sorts of things away from you besides dignity, and this is something I can sleep with.”

The prosecution of Cecily McMillan represents a culmination of the intense nationwide wave of repression unleashed against the Occupy Wall Street protests, which began in September 2011 and whose indictment of the monopoly of political and economic power by the “1 percent” struck a chord among broad layers of the population. So tense are the political and social conditions in the US, which is pervaded by an unprecedented chasm between the wealthy ruling oligarchy and the masses of working people, that even peaceful protests over the issue were seen as an unacceptable threat to be broken up by force.

The final arbitrary and vindictive prosecution carried out against Cecily McMillan is clearly meant as an act of intimidation against anyone thinking of launching similar protests. Her selection for this punishment is undoubtedly not accidental. She was an early organizer of the protests, and her name and photograph had appeared in the New York Times in connection with Occupy. It is far more likely that she was politically targeted for arrest and prosecution than that entire affair arose from a misplaced elbow.

In the course of the Occupy protests, at least 2,600 people were arrested and charged. In over 90 percent of the cases, any felony charges were dropped and pleas to misdemeanors led to release. Virtually the only other case in which the prosecution pressed for a felony conviction and jail time involved a young man who came to the protest from out of state carrying a firearm, which is illegal in New York City.

The decision to target McMillan for this heavy handed and vindictive prosecution was made by New York District Attorney Cyrus Vance, Jr., a Democrat who was elected in 2009 with the endorsement of virtually all of the party’s so-called liberals. It is a manifestation of the commitment of both major parties and the entire political establishment, at the top of which stands the Obama administration, to policies of police state repression in defense of the corporate and financial elite in the US.

The Socialist Equality Party demands the the immediate release of Cecily McMillan, the overturning of her conviction and the dropping of all charges against her.