WSWS reporters spoke with residents of Syracuse’s Westside neighborhood about the horrific housing conditions faced by most of the area’s residents.

Syracuse, a medium-sized city of 145,000 located in upstate New York between Albany and Buffalo, has been hard hit by the long industrial decline of the region followed by the economic crisis of 2008, from which workers have never recovered.

As a whole, a staggering 33.6 percent of the city lives in poverty. And nearly half, 48.6 percent, of all children age 18 and under live in poverty. As horrendous as those figures are, when one looks closer at those living in the Westside, the statistics are even worse.

According to the US Census Bureau for the 13204 zip code, which roughly covers the Westside, the poverty level for all who inhabit the area is nearly 43 percent; the rate for young people beneath 18 years old is two out of every three. 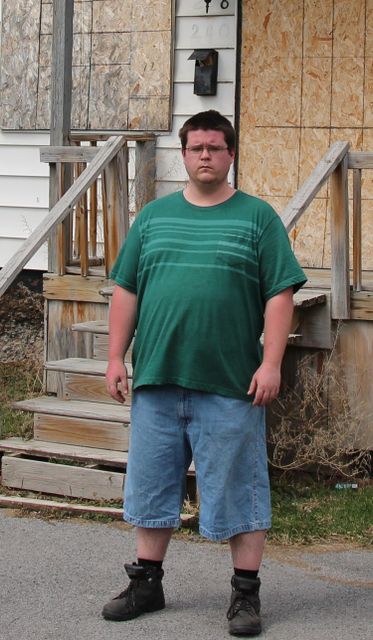 A product of both the deindustrialization of Syracuse and the growth of poverty, much of the housing has fallen into disrepair, while landlords and investors have reaped huge profits as workers, youth, and the elderly are forced to live in deplorable conditions.

Russell Perkins, currently residing in the Westside, was renting an apartment in a building on Richmond Avenue when it burned down in 2012.

“The fire started in the upstairs-back apartment. Afterward, the landlord’s maintenance man took everything from inside the back two apartments and poured everything into the backyard, which has stayed like this for two years, basically a dump. It’s a really bad eyesore. No one has been around to take care of it, the kids from the neighborhood have been going back there rummaging through stuff and we’re afraid eventually someone is going to get hurt.

“We were told the cause of the fire was electrical, and considering how long it took to get anything repaired, we’re lucky no one was hurt in the fire.” 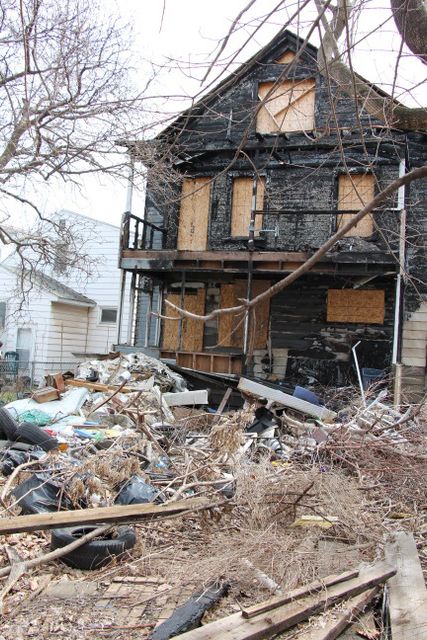 The house that Russell lived in is one of a number of tumble-down buildings on Richmond Avenue that are common throughout Syracuse, especially in the Westside neighborhood.

At some point the house, built as a single family home, was carved up into four apartments. When the fire broke out, there were four families living there, 14 people in all—ten adults and four children. Everyone was left homeless after the fire.

“The whole time I was living there with my girlfriend we only saw the landlord once and that was basically because everyone in the building was complaining about bugs,” Russell said. “The maintenance person would only show up every several months. He was supposed to mow the lawn, but I ended up taking care of it most of the time for nothing.

“The landlord had told tenants he was from California. The rent was $600 per month for a three bedroom, but only two bedrooms were usable due to heating not working in the other. Then there was a leak from the upstairs bathroom into the downstairs ceiling that rotted all the sheetrock. You couldn’t even access the basement.”

“He [the landlord] didn’t fix anything until everyone in the apartment was complaining about the problems and even then, when the maintenance person did show up, it was only for temporary, band-aid measures.”

The house has a history of being sold from one slumlord to another. The latest transaction was the sale of this house bundled together with several homes this past October. The buyer was chartered last year as a limited liability corporation: Apple Street Holdings LLC.

Apple Street Holding LLC is a subsidiary of the non-profit Community Preservation Corporation (CPC) in New York City. It was organized in the early 1970s by billionaire David Rockefeller, the former Chase Manhattan bank CEO and grandson of John D. Rockefeller Sr., founder of the Standard Oil monopoly.

According to their mission statement the CPC’s goal “[was] to preserve the existing housing stock on a scale that could stem abandonment and to create a model that could be replicated elsewhere...” In reality, it maintains dilapidated housing for the workers and the poor while producing profits for the owners. A look at the CPC leadership contains many figures that move seamlessly from the private and public sector, in particular from the government housing agencies, into banking.

The CPC has expanded to the cities of upstate New York, Rochester, Buffalo and Utica, which have become deindustrialized, creating low-cost investment opportunities for CPC and their ilk.

Investors buy these properties and don’t do anything to fix them up. On the one hand this earns them the most profits from the rents they charge, while driving down the housing values in the neighborhood, making it cheaper for them to buy more property.

In an effort to streamline the process for investors looking to cash in on the housing catastrophe, New York state has made available grant funds to land banks, a type of quasi-public agency, set up to move property to investors. They basically operate through the local governments which confiscate homes that have back taxes due through a foreclosure process. The homes are then resold at pennies on the dollar to investors and slumlords.

Frequently, there are people living in the homes and the land bank decides whether they should continue paying rent to the agency or evict them.

Many Westside residents are having difficulty finding a decent paying job. When asked about employment opportunities Russell said that, “I can’t even find work in the fast food industry, they’re just not hiring here. I’ve been unemployed for the past year and have had only one interview and it didn’t pan out. I’ve been filling out applications regularly and I want to work! It is just very difficult to find anything in Syracuse.”

Russell is currently in the Jobs Plus program, a welfare-to-work program that pushes people into low-wage temporary positions as a final option. He was told that if he couldn’t find a job in a month that they would send him to work for Labor Ready, a for-profit temporary agency, which hires people by the day. 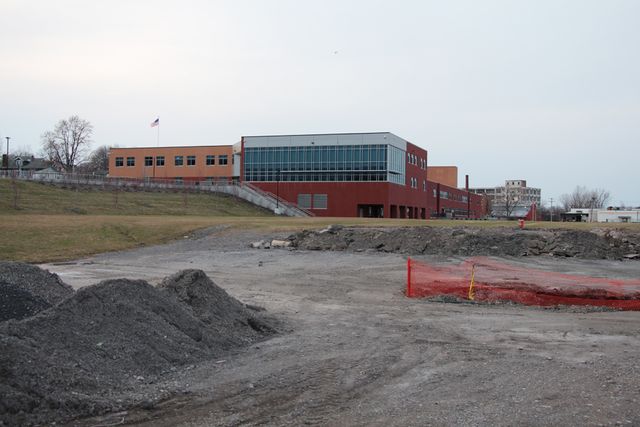 Fowler High School on the Westside, is slated to be privatized

The deteriorating conditions on Syracuse’s Westside have impacted the schools demonstratively. The Syracuse City School District (SCSD) has three schools on a watch list according to the New York State Board of Education (NYSBOE): Fowler High and Delaware Elementary, which serve the Westside, and Hughes Elementary on the Southside of Syracuse. Hughes Elementary is slated to become a “selective enrollment” Latin School according to Sharon Contrearas, SCSD superintendent.

Fowler High will be phased out and replaced by a privately run for-profit “Public Service Leadership Academy.” The school will have four career tracks centering on training students to work for the police or join the military. Delaware School is one of those on the chopping block

While teachers are routinely blamed for the failing school, in fact budget cuts to the school are the real cause. According to the web site SchoolDigger, Fowler High has seen a 33 percent increase in the student-to-teacher ratio since the Wall Street crash of 2008, as a significant number of teaching positions have been cut. Teachers at Fowler High will now be laid off and forced to re-apply for jobs at the new school. 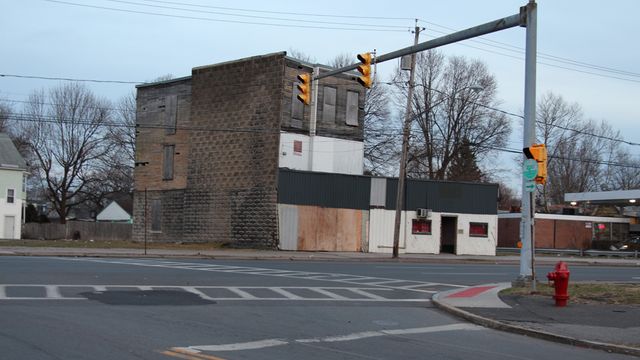 Abandoned building across street from the High School

Donna Mitchell said, “I am a renter and for what we’re getting the rent is just too high, and the landlord does not really take care of the place. My daughter is a kindergarten student at Delaware Elementary. We are really in dark about what is happening.

“We really like the teachers we have and are really concerned. I don’t know how this is all going to affect my school and work schedule.” Sinyora Reed, who has a son attending Fowler High, was emphatic in her response: “The school is an asset to the community and kids. It has dedicated teachers who care for their students. The school district hasn’t been very open with information on what they are planning for the schools.” When asked what her plans were she said, “I might just leave the area for Utica.”

The closing of the schools will further degrade the neighborhood as families that can move out to areas with better schools leave.

Heating costs have become a millstone around renters’ necks, especially after this past season’s severe winter in the Northeast, which forced difficult decisions between essentials like heating or food. The majority of the homes were constructed before 1960 and lack insulation. The high heating costs are compounded with cuts by the Obama administration to home heating assistance programs.

The untenable social conditions, unemployment and underemployment, decrepit housing, school cuts, failing infrastructure has created the Westside of today. The self-enriching schemes of the ruling class can only offer further social inequality. The primary need of society is the securing of the basic human rights such as a decent job and sound housing and health care. This can only be accomplished by the working class through the reorganization of society on a socialist and international basis.