Hundreds of thousands of children, some as young as seven years old, work on American farms. Among the most exploited are those who harvest tobacco, risking nicotine poisoning and other dangers, according to a report published Wednesday by Human Rights Watch.

The report, based on interviews with 141 children between the ages of seven to 17 in the states of Virginia, North Carolina, Kentucky, and Tennessee, details widespread health problems, exploitative working conditions, and low and missed wages (often below the federal minimum wage of $7.25 per hour) among child laborers. The children interviewed began work at a median age of 13. 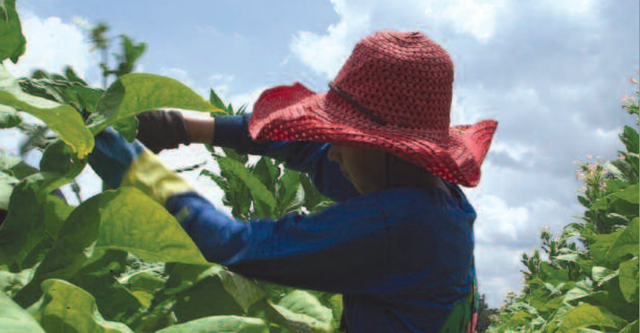 In the US, farms can legally hire children as young as 12 for an unlimited number of hours. This compares unfavorably even with the highly exploitative agricultural practices of Brazil and India, which formally prohibit children under the age of 18 from working on tobacco farms.

The report noted that there are at least 130,000 hired child laborers on American farms, although these statistics rely upon self-reporting and omit child laborers hired out from labor contractors or paid under the table, as well as hundreds of thousands more working on family farms. There are no statistics on the number of child laborers in tobacco farms specifically.

The vast majority of child laborers interviewed by Human Rights Watch are the children of illegal immigrants. Living in abject poverty, they are compelled to work long hours during the summer and during their free time in the school year in order to help provide for their families.

One teenager in a family with four other child laborers described to researchers how she spent her average paycheck: “I would give my mom more than half of my check for the bills. And then I would help her buy food. And whatever I had left, I’d buy my little brother something. I wanted to buy clothes, but I didn’t really have the chance to.”

Around three quarters of children interviewed for the study reported symptoms consistent with acute nicotine poisoning, such as “nausea, vomiting, loss of appetite, headaches, dizziness, skin rashes, difficulty breathing, and irritation to their eyes and mouths.” Also known as “Green Tobacco Sickness,” it is a common illness among tobacco workers that occurs when nicotine from the tobacco plants is absorbed through the skin.

“I didn’t feel well, but I still kept working. I started throwing up,” one sixteen-year-old told researchers, “I was throwing up for like ten minutes… I took a break for a few hours, and then I went back to work.”

The typical child interviewed in the study worked 12-hour days for minimum wage, often for more than five days a week, with few breaks and often lacking adequate drinking water, or in some instances, none at all. Many worked barefoot after rainstorms to avoid losing their shoes in the mud, and almost all received no personal protective equipment from their employers, relying instead on rubber gloves and raincoats fashioned from trash bags brought from home.

Children reported working in the fields as machines sprayed pesticides nearby, and reported feeling sick as the spray drifted over them. “I can stand the heat for a long time, but when they spray, then I start to feel woozy and tired. Sometimes it looks like everything is spinning,” a fourteen-year-old former tobacco worker told Human Rights Watch.

One seventeen-year-old boy described a particularly gruesome incident involving a “mower,” literally a lawnmower suspended in the air that workers push tobacco seedlings under: “My hand got stuck in the mower, and it cut off two of my fingers … I was pushing the plant, but I don’t know how the wheel slipped. It went really fast, and I couldn’t stop it, and it took my two fingers … We were trying to wait out the rain, and the boss didn’t like it that we were not working. So he told us to hurry up and get working. So we were working in the rain when I got hurt.” The report notes that the boy’s employer offered him $100 to cover his medical bills and lost wages.

The researchers also spoke with several children whose jobs required climbing the interiors of barns, often to a height of two stories, with no restraints and having to balance themselves on rickety planks a few feet apart. Though none of the children interviewed had fallen themselves, many knew coworkers and family members who had fallen. A Human Rights Watch team witnessed a wooden beam collapse in a barn less than an hour after workers had been walking over it to gather tobacco.

Significantly, most of the practices detailed in the report are legal, underscoring the complete absence of regulations governing agricultural labor. In fact, child labor regulations in agriculture are deliberately more lax than in all other sectors of the economy, despite accounting for more than two-thirds of all fatal work injuries amongst minors.

Andre Calantzopoulos, CEO of tobacco maker Philip Morris, told the Associated Press, “This report uncovers serious child labor abuses that should not occur on any farm, anywhere.” However, a spokesman for Philip Morris’ parent company, the Altria Group, categorically rejected the report’s key recommendation that child labor be banned in tobacco farming, declaring it “really contrary to a lot of the current practices that are in place in the U.S.”

Large tobacco companies typically set stringent quality standards when contracting with tobacco farms, but set no such restrictions when it comes to the treatment of workers, including children, who work for more than forty hours a week for peanuts while the industry rakes in tens of billions of dollars in profits annually.