On Thursday, trade union and affiliated organizations organized a series of protests in cities throughout the US and internationally, with the stated goal of raising the minimum wage to $15 per hour.

The protests, coordinated by the Service Employees International Union (SEIU) and the union-backed organizations Fast Food Forward and Low Pay is Not OK, were the latest in a series of stage-managed operations aimed at shoring up the dues base of the unions and directing social opposition behind the Democratic Party. 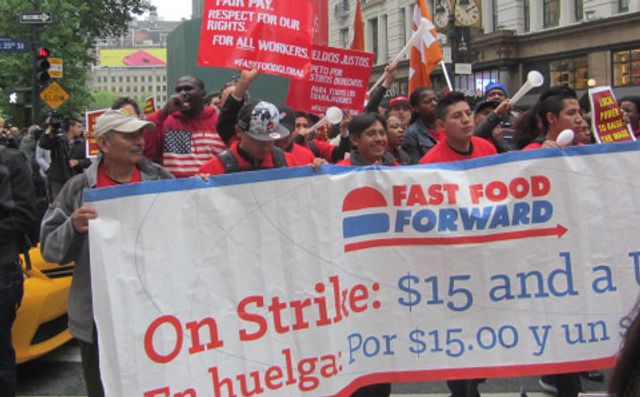 Internationally, the events were promoted by the International Union of Food, Agricultural, Hotel, Restaurant, Catering, Tobacco and Allied Workers’ Associations, which met at a conference to prepare for the protest initiative last week.

Fast food workers are among the most heavily exploited layers of the working class. They are typically denied full time work, often working for 4 hours or less at a time for an average of less than $9 per hour. Twenty percent of families headed by a fast food worker live below the official federal poverty line.

Many work for years without ever receiving a raise, struggling to survive on a combination of starvation wages, food stamps and the minimal social aid offered by the state. Fast food companies like McDonalds, Burger King and Dominos Pizza are adamantly opposed to any measures to improve the wages of their workers.

The union-sponsored protests, however, have nothing to do with defending the interests and conditions of the fast food workers.

The anti-working class unions, which have collaborated with corporations and the Democratic Party in driving down wages and cutting jobs, are looking for opportunities to gain new dues-paying members. As the Los Angeles Times noted, “In the US, where union ranks are thinning, the fast-food strikes have been called in an attempt by labor leaders to boost membership.”

The demonstrations were attended largely by union functionaries and union front groups, rather than actual fast food workers. Many of the protests lasted only a few hours or less, with their locations not publicized, making it impossible for significant numbers of workers to become involved.

The events were also carefully coordinated with the news media and were heavily prompted in pro-Democratic Party publications like Salon and the Nation, which hailed the event as the “biggest strike in fast food history,” as well as the New York Times and other major media. 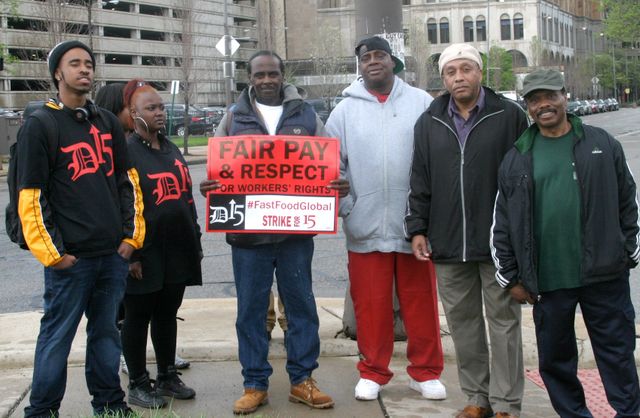 Protestors in Detroit for $15/hour wage near McDonald's restaurant

Reporters from the World Socialist Web Site attended a small demonstration in Detroit off Woodward Ave. The former center of auto manufacturing in the US is currently under the control of an emergency manager, who has thrown the city into bankruptcy with the support of both big business parties and with the collaboration of the unions. The minimum wage protests have been backed by organizations associated with the Democratic Party, including the NAACP, local churches and Al Sharpton’s National Action Network.

The WSWS also attended one of the protest marches in New York City, where the majority of protestors were not even employees of fast food chains.

Political support for the protests is being provided by the middle class organizations, such as Socialist Alternative and the International Socialist Organization (ISO), which orbit around the Democratic Party and provide a progressive veneer to establishment politics. These organizations are promoting the $15 minimum wage in an effort to head off growing opposition to the two-party system.

As with other protests backed by the unions (including “Black Friday” Walmart protests late last year), the minimum wage campaign is closely coordinated with the reelection plans of the Democratic Party. The Obama administration has recently vowed to increase the minimum wage of federally employed workers to about $10 per hour, as part of the Democrats’ fraudulent “campaign on inequality.”

In fact, the Obama administration has overseen and spearheaded an assault on workers throughout the country, beginning with the forced bankruptcy of the auto companies in 2009. Over the past five years, corporate profits have soared to record levels, while wages and the overall share of income going to the working class have plummeted.

A struggle against the horrific conditions of fast food workers and of the entire working class is necessary, but such a struggle must be waged in opposition to the pro-business unions and the two-party capitalist system.