Tensions are reaching a boiling point in the agricultural town of Salinas, California as the population responds with hostility to a series of recent police killings that have taken place in working-class neighborhoods.

On Wednesday, between 300 and 1,000 people in the city of 150,000 marched on Del Monte Avenue in response to Tuesday’s killing of an unidentified man in East Salinas. The victim of Tuesday’s attack was shot at least five times by police at point-blank range as he was backing away from two officers. 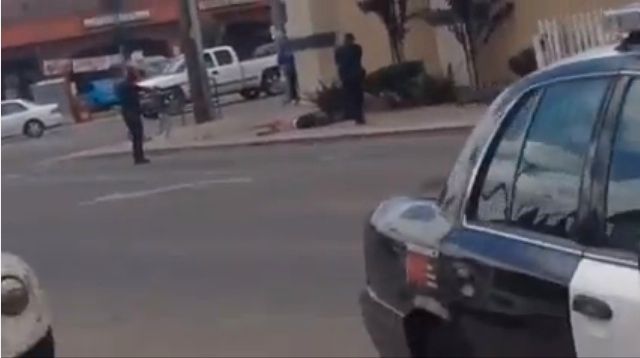 Police claim that the victim attacked the officers with a pair of gardening clippers and that officers were forced to respond out of fear for their lives. However, video of the altercation shows police trailing the individual, who was suspected of attempting to break into a home, for over a block before shooting him dead. Officers kept their guns drawn as angry and distressed onlookers scream “murderers” at them in English and Spanish.

The shooting was the second police killing in two weeks and the third this year. On May 9, police shot and killed 26-year old farmworker Osman Hernandez in the parking lot of Mi Pueblo bakery. Hernandez, who was allegedly brandishing a knife, was tased and then shot by police as he lay on the ground. On March 20, Angel Ruiz was also shot to death outside a restaurant as he held an airsoft gun.

The demonstrations drew wide support from the local population and continued late into Wednesday night. Demonstrators who assembled during the day and protested until late in the evening in response to the shooting were met by armed police in riot gear.

A family member of Hernandez in attendance at Wednesday’s protest said that “[the police] killed Osman like a dog as he lay on the ground. Why are we to trust them investigating themselves? Why does it take so many bullets to the head to subdue a man who is already lying on the ground? Osman’s life had value. We want the truth.”

At a city council meeting Tuesday night following the shooting of the unidentified man, one resident told the council: “Yes, we do have a gang problem. And they’re dressed in blue and they have badges and they’re called the Salinas Police Department.”

Another resident spoke with KSBW news at Wednesday’s demonstrations and said that residents “don’t feel safe with this kind of police. We don’t feel safe. Instead of there being gangs shooting each other, now we have police shooting us.”

While the demonstration was taking place, a third person, 26-year-old Constantino Garcia, was shot and killed as he participated in or stood near the demonstration on Wednesday night. Though the exact details of this shooting remain unclear, it is possible that police are also responsible for this murder. Police claim that Garcia’s death was gang-related.

As the situation intensified after the shooting of Garcia, demonstrators attacked police vehicles with bricks and stones. Police confronted demonstrators with assault rifles in an open threat that they were prepared to open live fire, which would have resulted in a massacre.

At least one arrest was made. Twenty-three-year-old Diego Garcia was arrested for “harassing” a police dog and “inciting a riot” by making threatening motions with his hands toward the heavily armed police.

In an official statement, the police department “ask[s] the community to be patient and remain calm until enough facts are known so that a conclusion as to the appropriateness of the officers’ actions can be determined.”

Police Chief Kelly McMillan told demonstrators Wednesday that they “need to be respectful of the police officers who are trying to do their work.”

Deputy Chief Terry Gerhardstein added: “We are asking people to remain calm. It does no good for people to be violent.”

Police demands for residents to remain nonviolent are the peak of hypocrisy after the department killed two men in a two-week span and then brandished assault rifles against residents protesting the deaths.

The population of Salinas is entirely justified in its anger toward the police killings, which have taken place across the country with increased regularity.

In March, police shot and killed a homeless man who made a home out of tarps in the foothills near Albuquerque, New Mexico, and then proceeded to kill another man outside of his apartment only days later. In the first killing, which was captured on video, the officer can be heard saying “booyah” after he fires eight rounds of his assault rifle into the homeless man’s body. Police responded to the ensuing demonstrations with riot police and armored vehicles.

Similar shootings have taken place in Washington, Arizona, Oklahoma and many other states.

The increase in police violence is inextricably linked to the devastating effects of growing social inequality. Salinas and the Monterey County area are amongst the poorest in the country, despite the fact that San Francisco and the Silicon Valley are merely 100 miles away.

A total of 30.7 percent of the population of the city of Salinas lived below the poverty line in 2009, a figure that has likely spiked in the last five years. A 2011 study by the University of California, Los Angeles revealed that 74 percent of residents of East Salinas, where Tuesday’s shooting occurred, make less than 200 percent of the official federal poverty line, which amounts to $47,700 for a family of four—double the paltry $23,850 rate for the same-sized family.

Additionally, the California Institute for Rural Studies published a 2011 study revealing that despite the fact that much of the country’s lettuce and other food crops are produced in Salinas and harvested by farmworkers, 66 percent of Salinas Valley farmworkers struggle to feed themselves adequately and on a regular basis. Of those families with children under five years of age, 78 percent participate in the federal Women, Infants, and Children (WIC) food subsidy program. Over a third of the population uses food stamps.

Although agriculture in California produces profits of $37 billion annually, farmworkers face destitute conditions that have barely improved—if at all—from previous decades. Farmworker communities are subjected to regular intimidation and terror by police and immigration officials, of which the most recent police killings and crackdown are yet another manifestation.