No more war! The anti-war message of The Cranes Are Flying (1957)

Almost 70 years after the end of the Second World War, the bloodiest war in human history, the world again faces the danger of military conflict on a mass scale.

In 2012, the European Union (EU) shamelessly accepted the Nobel Peace Prize on the grounds that it—and its forerunners—had “for over six decades contributed to the advancement of peace and reconciliation, democracy and human rights in Europe.” This is reality turned upside down.

The EU has a 62-year history of supporting regime change and criminal wars all over the world, including those in Iraq and Afghanistan. The EU recently partnered with its US ally in staging an ultra-right coup in Ukraine, which has led to a bloody civil war and threatens to provoke a confrontation with Russia, also a nuclear power. 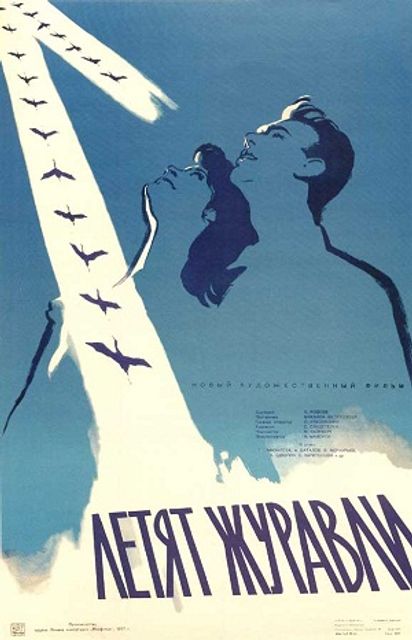 Poster for The Cranes Are Flying

This darkly farcical “peace prize” and the hypocrisy of the great powers have gone virtually unchallenged. Not a single voice can be heard within the mainstream media opposing the war drive. Similarly, not a single major film has been made recently in protest against the imperialistic warmongering. A serious filmgoer feels an enormous void, sensing the terrible crisis in the film industry and the culture as a whole, which has ceased to represent our current reality in an important way.

In the absence of new films able to say “No to war,” this reviewer felt the need to return to a movie that she thinks is one of the best anti-war movies ever made, The Cranes Are Flying (1957), made in the USSR. The film won the Palme d’Or at the 1958 Cannes Film Festival, the only Soviet film to win that award, and received a wide audience in the West, including in the US, where it was released in March 1960.

The Cranes Are Flying is a story of two young people, Boris (Aleksey Batalov) and Veronica (Tatyana Samoylova), who are in love and plan to get married. Their plans are postponed when the German army invades the USSR in 1941. Boris, a decent and unselfish young man, volunteers to join the Soviet army before being drafted. He is later reported as missing in action. Veronica, who loses her parents in a bombing raid and never ceases to forget her fiancée, is pushed into marrying Boris’s cousin, Mark, who pursues her in Boris’s absence, after fraudulently obtaining a draft exemption. 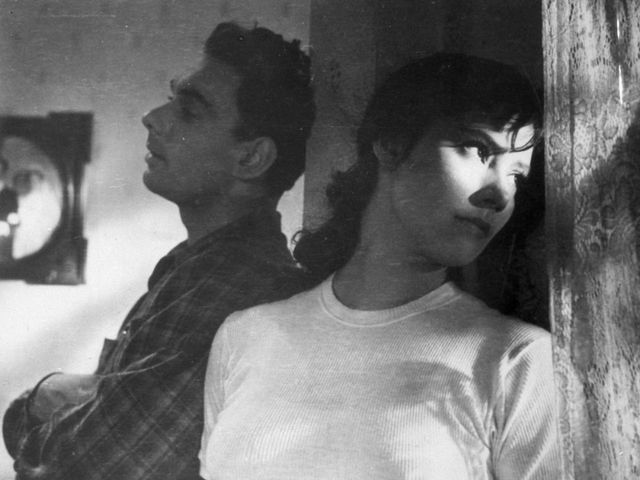 Based on Viktor Rozov’s play Forever Alive, The Cranes Are Flying is a complex and truthful tale of human beings whose right to live their lives is brutally interrupted by the war and its attendant suffering and trauma.

If it hadn’t been for Stalin’s death in 1953, The Cranes Are Flying would probably not have been made. Born in Tbilisi, Georgia, Soviet film director Mikhail Kalatozov (1903-1973) made this, his best-known film, in 1958 during the so-called Thaw Period in USSR history. After Stalin’s demise, during the 20th Congress of the Communist Party in 1956, Nikita Khrushchev, the party’s first secretary, gave his famous “secret speech” denouncing Stalin and exposing a portion of his crimes. This resulted in a major reshuffle in the party and led to certain changes in Soviet society, including increased freedom of speech.

Khrushchev’s speech and the “thaw” overall had a major impact on the arts and filmmaking in particular, as financial resources became available and censorship was lessened. State-controlled film studios such as Mosfilm, the largest in the country, where The Cranes Are Flying was made, received funding for new works. History films, especially those about the October Revolution and World War II, were encouraged.

“The masters of the cinema art were shown the way to overcome the ‘Cult of the Personality’ as the Stalin era was called. Leninist norms of ‘Partiinost’ (Party Spirit) were restored and the faculties to activate and further the cultural-political life of the nation were increased,” commented Louis Harris Cohen in his 1974 book The Cultural-Political Traditions and Developments of the Soviet Cinema 1917-1972.

In previous Soviet movies about the Second World War, historical truth was falsified as the works had to fit the needs of Stalinist propaganda about the Soviet war effort, always victorious and patriotic, always one-dimensional and heroic. In films such as The Fall of Berlin (1950, Mikheil Chiaureli) , Stalin was depicted as individually responsible for winning the war. The Cranes Are Flying was the first to break with that tradition.

Kalatozov’s film thrusts before our eyes newsreel-like scenes of bombed buildings, shattered glass, people in panic, crying children and orphans on their own, groups of wounded soldiers with no eyes, arms or legs, the filth and mud of the combat zone. The Cranes Are Flying is a masterpiece of anti-war cinema because it shows military conflict through the eyes of its real victims, ordinary people, caught in the nightmarish vortex of war’s destructive force. 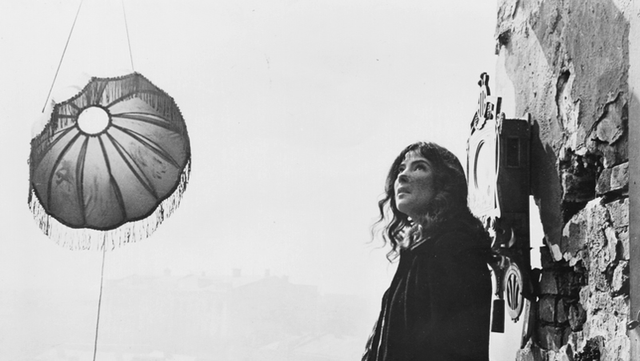 After the bombing raid

Shot in black-and-white, possibly to depict the grim realities, as well as to resemble a documentary, the movie stuns the viewer with the beauty of its images. Cinematographer Sergey Urusevskiy (1908-1974), renowned for The Forty-first (1956, Grigoriy Chukray), as well as Kalatozov’s I Am Cuba (1964), created a visual masterpiece in which images often take over from the dialogue.

Kalatozov, who started his career making silent movies, borrows techniques from the silent era by letting Urusevskiy use stunning close-ups in which faces express a great deal, swift and sudden movements of the camera, often hand-held, rapid change of point of view, and short takes to portray emotional states of panic and fear, as well as motionless mid- and long takes to convey trauma.

Boris’s death in a swamp, conveyed through the image of the swirling birch trees against the sky, is simply breathtaking—we can only imagine that this is exactly how one collapses, how one dies. In the scene where Veronica frantically runs alongside the train tracks in a possible suicide attempt, we feel her panic, her shortness of breath, the dizziness of her emotional breakdown and the near-death tension. 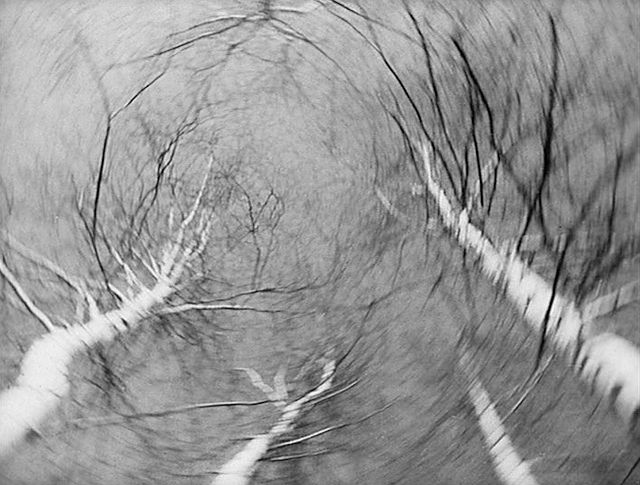 The death of Boris

In the tradition of Sergei Eisenstein, the beautiful spiral staircase on which Boris runs after Veronica toward life and happiness is later contrasted with the staircase damaged by bombs, which leads Veronica to the shocking discovery that her parents have simply disappeared. The only thing left of their apartment after the air raid is a loudly ticking clock on the wall, excruciatingly reminding her that life, indifferent to her loss, goes on.

There is also hope in Kalatozov’s movie, hope for a rebirth of a new life, symbolized by the triangular V-shaped flock of cranes flying over Moscow.

The bitter lessons of the two imperialist wars should not be forgotten, nor the lessons of the betrayals of Stalinism, which made the Second World War and the immense loss of human life possible. The current crisis in Ukraine is the consequence of the same Stalinist policies that led to the collapse of the Soviet Union.

There is a urgent need to take up the fight against the accelerating militarism and drive toward a new world war through the abolition of the cruel profit system, for “Only after we have overthrown, finally vanquished and expropriated the bourgeoisie of the whole world, and not merely in one country, will wars become impossible.”

These words belong to Vladimir Ilyich Lenin, whose little statuette proudly sits on Boris’s desk in The Cranes Are Flying.

The reviewer hopes that contemporary viewers will find the film and its anti-war message as powerful and meaningful today as it was when the film was first released. Let’s hope that the gruesome images of war depicted in The Cranes Are Flying will not ever be seen again. Let’s conclude by citing the speech that Boris’s friend, Stepan, delivers to the crowd at the train station in the movie’s final scene:

Towns and villages will be rebuilt

Our wounds will heal

but our fierce hatred of war will never diminish.

and we will do everything to insure that the sweethearts are never again parted by war,

that mothers need never again fear for their children lives,

We have won and we shall live never to destroy

but to build a new life!”

This review is also a tribute to the great Russian actress, Tatyana Samoylova, who recently passed away on May 5, 2014, at the age of 80.

The film is available from Amazon and the Criterion Collection.