Clint Eastwood’s Jersey Boys: The story of The Four Seasons on screen

Directed by Clint Eastwood; screenplay by Marshall Brickman and Rick Elice, based on their musical book .

Clint Eastwood’s Jersey Boys is a film version of the popular musical that premiered on Broadway in 2005 and revived interest in the music of Frankie Valli and The Four Seasons. The movie recounts the background and rise of the band, three of whose members hailed from the tough streets of working class New Jersey and which achieved international stardom in the 1960s.

The group was inducted into the Rock and Roll Hall of Fame in 1990 and is one of the best-selling of all time. Featuring Valli’s brilliant, high-pitched falsetto voice, the songs of The Four Seasons are ageless and deserve to be introduced to new generations. Unfortunately, Eastwood is not the man for the job. 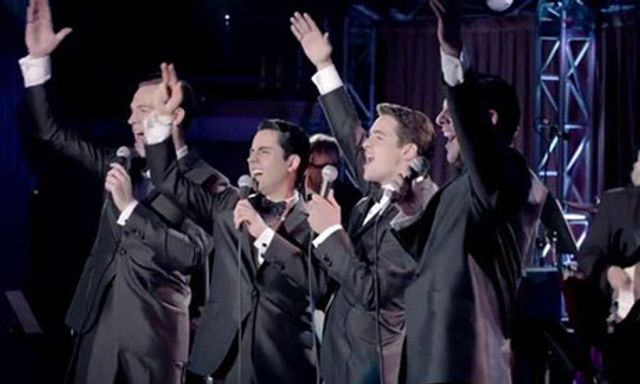 The actor-filmmaker, now 84, has directed over 30 films and contributed to more than 50 as actor, director, producer or composer. Active and prolific as a director since 1971 (Play Misty for Me), Eastwood’s body of work is deeply flawed, with a few exceptions (including True Crime, 1999, and Letters from Iwo Jima, 2006). Jersey Boys is a very poor effort, ranking alongside some of his weakest films, such as Mystic River (2003) and Million Dollar Baby (2004).

The movie opens in Belleville (which borders Newark), New Jersey in 1951 in an Italian-American community. “If you’re from my neighborhood, you got three ways out: You could join the army. You could get mobbed up. Or—you could become a star,” says Tommy Devito (Vincent Piazza), determined to choose the third option, despite his history of hooliganism. For many of the area’s explosive youth, jail is a second home and popular music their escape. Tommy recognizes that his younger friend Frankie (John Lloyd Young), born Francesco Castelluccio, is gifted with a powerful, unique voice.

In the early 1950s, Tommy organizes a group called The Variety Trio and gives Frankie his first opportunity to perform before an audience—and to land a girlfriend, the street-wise Mary Delgado (Renée Marino). Mary convinces him to shorten his last name to Valli. Meanwhile, Frankie is making a living as a barber and Tommy, who is in and out of trouble, enjoys the patronage of local crime boss Gyp DeCarlo (Christopher Walken).

As the music scene makes the transition from doo-wop to the rock era, the struggling group consisting of Frankie, Tommy and Nick Massi (Michael Lomenda) is introduced to keyboardist-songwriter Bob Gaudio (Erich Bergen)—the 15-year-old writer of the tune “Who Wears Short Shorts” (1958)—by future actor Joe Pesci (Joey Russo). Their fortunes and name change, and guided by the arranging prowess of Bob Crewe (Mike Doyle), the hit parade begins. Many of their ballads speak to the band’s working class origins (“Big Man in Town,” “Dawn” and “Rag Doll,” for example). “Sherry” (1962) is the Four Seasons’ first smash recording, winning them an appearance on the Ed Sullivan show.

However, Tommy is out of control, racking up nearly one million dollars in debt, some of it owed to gangsters. Frankie’s marriage is disintegrating, and his personal tragedies culminate years later in the death of his daughter. He pledges that the group will pay off Tommy’s debts. Nick, acting on years of grievances, leaves the band. Now, unencumbered, the talented combo of Frankie and Bob meteorically soar to new heights—minus a few colleagues and wives or girl-friends.

Eastwood’s Jersey Boys fails largely because it is neither fish nor fowl. The story might have been presented with a relatively light touch as a musical revue, showcasing the wonderful music of The Four Seasons and merely hinting impressionistically at the times and the locales. Or, of course, the rise of the group could have been taken on seriously, probing the connection between popular music in the late 1950s and early 1960s and the changes in American life. 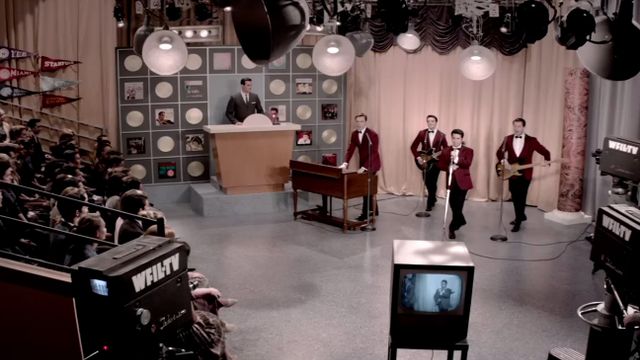 As it is, clocking in at more than two hours, Jersey Boys is both heavy-handed and superficial. Its “dark” and even grim tone (Valli-Young nearly always scowls, the others curse at each other much of the time, the women nag or scream …) is inappropriate to a period of generally rising expectations and to the group’s music itself. A song like “ Sherry ,” with its sharp, incisive opening and insistent, self-confident lyrics, with Valli’s voice cutting throughout like a sharp blade, speaks to the mood of a generation of working class young people determined to be heard from … and even enjoy themselves!

Instead, Eastwood largely projects his own present-day misanthropy and rancid individualism back in time. The film’s biographical material—the major portion of the film—is cumbersome and trite. One winces when the genesis of “Big Girls Don’t Cry,” is presented by Eastwood as the product of watching a Hollywood movie, in which the female lead remains stoic while being slapped (in Billy Wilder’s 1951 film noir Ace in the Hole .). However accurate the details of the episode may be, its crude dramatization falls embarrassingly flat.

Even a 38-year-old actor playing a teenage Frankie could be credible, if the film were not so gloomy, making every plot and production anomaly stick out like a sore thumb. The memorable musical numbers—which begin an hour into the film—have enough color, artfulness and competent singing to be a respite from the overall tedium. The film, however, eschews any consistent effort to uncover the real conditions of the offspring of Italian immigrants at that time, aside from a few passing, stereotyped references, or how such music as that of The Four Seasons came to be.

Valli first lived with his family, during the Depression, in a cold-water apartment in Newark, before moving, according to his own web site, to “a public housing project—Stephen Crane Village—on the tough streets of Newark, New Jersey.” In the 1940s, the city was still rich in music. Valli would skip school to hear concerts in downtown Newark.

“When he was seven,” explains Valli’s web site, “his mother took him to New York City’s Paramount Theater to see Frank Sinatra. ‘I saw Sinatra coming out on stage,’ Frankie recalls, ‘and the way he was lit up, it was like he had an aura around him. I decided then and there that’s what I was going to do—be a successful singer.’”

According to history-of-rock.com, Valli was influenced by jazz, “and particularly enjoyed listening to the Four Freshmen, the Hi-Los, and the Modernaires. He also admired classic R&B bands including the Clovers and the Drifters. As a child, Valli had no formal vocal training but instead taught himself to sing by doing impressions of other artists. Since he had a naturally high voice, he focused on [African American] singers Rose Murphy and Dinah Washington.”

No consideration is given by Eastwood to the major musical and social influences at the time and how they surged through Valli and the band, who considered The Beach Boys, another great act, their biggest rivals. The 1963 hit “Walk Like A Man” is undeniably Motown influenced, and its theme, whatever the outlook of Gaudio and company, in retrospect, seems inevitably influenced by the civil rights struggle. 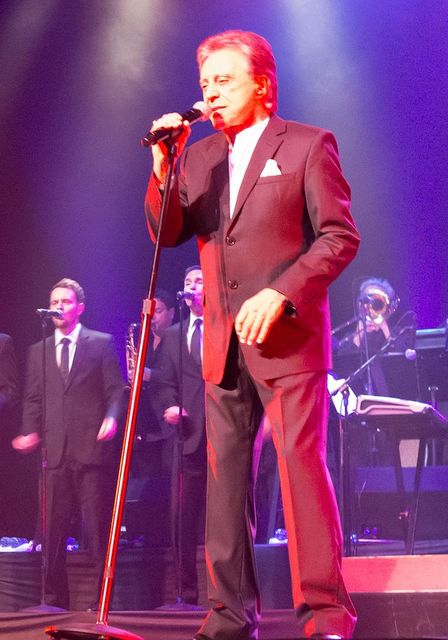 None of the more intriguing questions are worked through, or, for the most part, even touched upon. Instead, the reductionist movie contains dialogue like this, from a scene in the recording studio:

Tommy: “As opposed to what—a woman?”

Tommy: “Instead of girls.”

Bob: “Instead of like boys. Why are you doing this?”

Crewe: “Look, Miss Congeniality—it’s a metaphor. This is an anthem for every guy who’s ever been twisted around a girl’s little finger.”

Also unsavory are the fleeting sequences between Valli and his wife—an unpleasant, resentful shrew. One gets the sense that Eastwood is justifying his own behavior and lambasting those who would make demands upon and constrain artistic genius. These scenes are almost unrelentingly abrasive and single-note.

In Eastwood’s sea of clichés, the only characters who don’t drown are Bob, in a good performance by Bergen, and perhaps Young, who is low-key enough to be palatable as Frankie. Piazza’s Tommy tries to deal with the airless script by pumping up the empty aggression and Lomenda is directed hamfistedly to speak with an overdone New Jersey accent.

The depiction of Italian American family life in Jersey Boys is not drawn from life for the most part, but from other hackneyed scripts and performances. There was a time, however, when Hollywood films provided a more nuanced picture, including a number of works featuring the extraordinary Richard Conte (born in Jersey City in 1910), among them House of Strangers (1949), Thieves ’ Highway (1949, in which Conte plays a Greek immigrant’s son), Cry of the City (1948) and The Brothers Rico (1957).