US median income has plunged, inequality has grown in Obama “recovery”

The yearly income of a typical US household dropped by a massive 12 percent, or $6,400, in the six years between 2007 and 2013. This is just one of the findings of the 2013 Federal Reserve Survey of Consumer Finances released Thursday, which documents a sharp decline in working class living standards and a further concentration of wealth in the hands of the rich and the super-rich.

The report makes clear that the drop in a typical household’s income was not merely the result of what is referred to as the 2008 recession, which officially lasted only 18 months, through June 2009. Much of the decline in workers’ incomes occurred during the so-called “economic recovery” presided over by the Obama administration.

In the three years between 2010 and 2013, the annual income of a typical household actually fell by 5 percent. 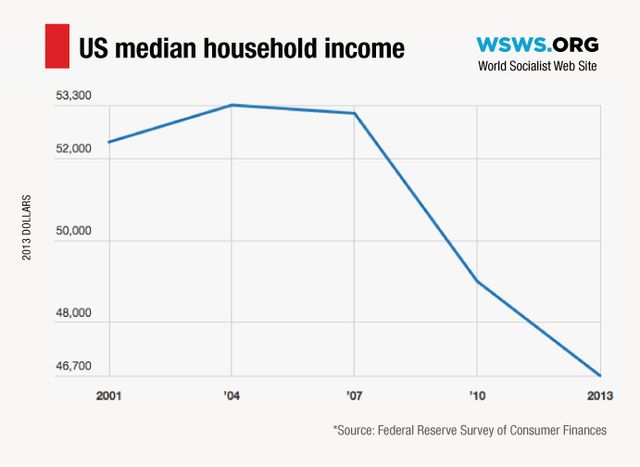 The Fed report exposes as a fraud the efforts of the Obama administration to present itself as a defender of the “middle class”. It has systematically pursued policies to redistribute wealth from the bottom to the very top of the income ladder. These include the multi-trillion-dollar bailout of the banks, near-zero interest rates to drive up the stock market, and austerity measures and wage cutting to lift corporate profits and CEO pay to record highs.

The Federal Reserve data, based on in-person interviews, show a far larger decline in the median income of American households than indicated by earlier figures from the Census Bureau’s Current Population Survey.

In line with the figures on household income, the report shows an ever-growing concentration of wealth among the richest households. The Fed’s summary of its data notes that “the wealth share of the top 3 percent climbed from 44.8 percent in 1989 to 51.8 percent in 2007 and 54.4 percent in 2013,” while the wealth of the “next 7 highest percent of families changed very little.”

The report states that “the rising wealth share of the top 3 percent of families is mirrored by the declining share of wealth held by the bottom 90 percent,” which fell from 33.2 percent in 1989 to 24.7 percent in 2013. 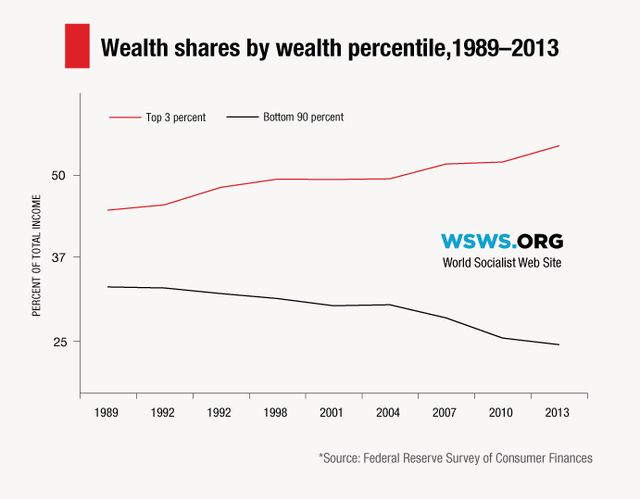 The ongoing impoverishment of the population is an indictment of capitalism. There has been no genuine recovery from the Wall Street crash of 2008, only a further plundering of the economy by the financial aristocracy. The crisis precipitated by the rapacious, criminal practices of the bankers and hedge fund speculators has been used to restructure the economy to the benefit of the rich at the expense of everyone else.

Decent-paying jobs have been wiped out and replaced by low-wage, part-time and temporary jobs, with little or no benefits. Pensions and health benefits have come under savage attack, as seen in the bankruptcy of Detroit.

Not surprisingly, the Fed report has been buried by the American media, confined to the inside pages of the major newspapers.

While median income fell between 2010 and 2013, mean (average) income grew, from $84,100 to $87,200. The report noted that, “the decline in median income coupled with the rise in mean income is consistent with a widening income distribution during this period.”

For the poorest households, the drop in income has been even more dramatic. Among the bottom quarter of households, mean income fell a full 10 percent between 2010 and 2013.

These statistics reflect both a historic and insoluble crisis of the profit system and the brutal policies of the American ruling class, which is carrying out a relentless assault on working people and preparing to go even further by dismantling bedrock social programs such as Medicare and Social Security. The data undercuts the endless talk of “partisan gridlock” in Washington and the media presentation of a political system paralyzed by irreconcilable differences between the Democratic and Republican parties.

There has, in fact, been a seamless continuity between the Bush and Obama administrations in the pursuit of reactionary policies of war abroad and class war at home. The two parties have worked hand in glove to make the working class pay for the crisis of the capitalist system.

The Federal Reserve has itself played a critical role in the growth of social inequality in the US. The bailout of the banks, estimated at $7 trillion, has been followed by six years of virtually free money for the banks.

Every facet of American life is dominated by the immense concentration of wealth at the very top of society. The grotesque levels of wealth amassed by the parasites and criminals who dominate American business, and the flaunting of their fortunes before tens of millions struggling to pay their bills and keep from falling into destitution, are fueling the growth of social anger. This anger will increasingly be directed against the entire economic and political system.

The figures released by the Fed reflect a society riven by class divisions that must inevitably trigger social upheavals. The explosive state of social relations is itself a major factor in the endless recourse by the Obama administration to military aggression and war, which serve to deflect internal tensions outward.

The growth of inequality likewise underlies the relentless attack on democratic rights in the US, including the massive domestic spying exposed by Edward Snowden and the use of militarized police to crack down on social opposition, as seen most recently in Ferguson, Missouri.