The bank bailout and the Forbes 400

Six years ago this past Friday, the US Congress passed the Emergency Economic Stabilization Act of 2008, which established the $700 billion Troubled Asset Relief Program, the first of the bank bailouts. It was followed by a series of Federal Reserve and Treasury programs that allocated some $7 trillion in free loans to the financial system.

The day after the passage of TARP, October 4, 2008, the World Socialist Web Site offered the following analysis: “The [Bush] administration has invoked the worst economic crisis since the Great Depression in an attempt to terrorize the American people into accepting the greatest transfer of public resources to the financial elite in history…[The bailout] will facilitate an ever-greater concentration of wealth that can only produce a drastic deterioration of living conditions and the undermining of basic democratic rights.”

Six years later, not a word of this assessment needs to be revised, except for changing the future tense to the past.

The outcome of the past six years of government policy can be seen in the figures released last week by the business magazine Forbes, ranking the 400 wealthiest Americans. The report revealed that since 2009, the 400 richest people in the US have nearly doubled their net worth, to a shocking $2.9 trillion. This is nearly a fifth of the total value of all the goods and services produced in the United States in an entire year.

The accumulation of this vast wealth takes place under conditions not of general prosperity, but rather of an economic stagnation and falling living standards for the majority of the population. Since 2010, the median household income in the US has fallen by five percent. 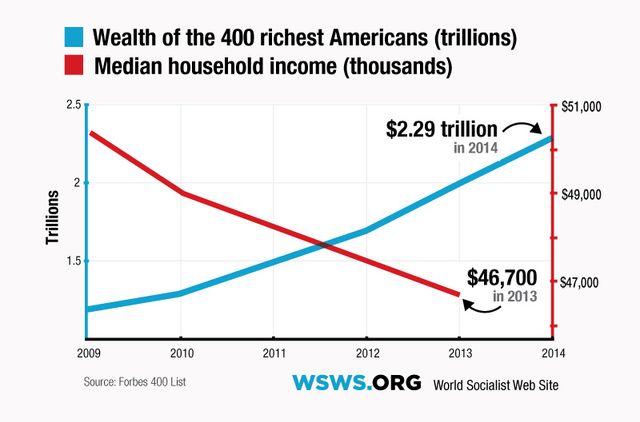 This outcome is the intended result of the entire policy of the ruling class since the economic crash. From the beginning, the ruling class’s response, initiated under Bush and vastly expanded under Obama, was characterized by two interrelated aspects: the provision of unlimited funds to prop up the financial system—and with it the wealth of the financial oligarchy—to be paid for through sweeping attacks on social programs and the living standards of the working class.

Earlier this year, Timothy Geithner, the former Treasury Secretary who now heads a private equity firm, published his memoir, which makes clear that every single substantial policy question related to the financial crisis was decided solely from the standpoint of maximizing the most predatory profit interests of Wall Street.

According to Geithner, by September 2008 it became clear to the Bush administration and the Federal Reserve that every major US financial institution was insolvent, and would go bankrupt without government intervention. Under these circumstances, the Federal Reserve and Treasury allowed Lehman Brothers to collapse, a move that had the effect, to use a phrase recalled by Geithner, of “shock[ing] the political world into taking the crisis seriously.”

Following the collapse of Lehman, the Federal Reserve and Bush administration crafted TARP, which, amid broad popular opposition, was initially voted down in the House of Representatives before passing amid a lobbying campaign by the presidential candidates of both parties (Democrat Barack Obama and Republican John McCain).

After coming to office, the Obama administration has carried out a set of clear policies: the banks would get rescued, but their executives would remain in place, there would be no criminal prosecutions despite clear evidence of illegal activities, no “haircuts” for bank creditors and no meaningful restraints on executive pay.

The Obama administration's actions in the aftermath of the 2008 crash were dictated by the same considerations as the bank bailout. In his own memoir, Neil Barofsky, the former inspector-general for TARP, noted that the Obama administration’s mortgage modification program, touted by the White House as a means to help homeowners avoid foreclosure, was in fact nothing more than “an aid to the banks, keeping the full flush of foreclosures from hitting the financial system all at the same time.”

Which brings us back to the Forbes 400. Beyond the total mass of wealth that the rich now control, the most salient fact revealed in the report is the manner in which this wealth has been, to use the word loosely, “earned.” As the magazine began its report, “Thanks to a buoyant stock market, the richest people in the US just keep getting richer.” A “buoyant stock market”—that is, through speculation on an historically unprecedented scale, aided and abetted by the government and the Federal Reserve.

Finance is increasingly dominant among America’s wealthy. While the finance and real estate sectors made up about 4.4 percent of the first Forbes 400 in 1982, they now make up 21 percent. Beyond those who derive their wealth immediately from the financial sector, the fortunes of billionaires in other sectors of the economy is increasingly based on share values. For example, Facebook CEO Mark Zuckerberg, currently 11th on the list with a net worth of $34.1 billion, had his wealth increase seventeen-fold from 2009 as a result of Facebook’s speculative initial public offering.

What is revealed in these figures is that the very processes that erupted in 2008 are continuing. The crash was itself rooted in the protracted crisis of American capitalism, characterized by the growth of financial parasitism proportionately with the decline of manufacturing and productive activity. Yet six years later, the big banks are bigger than ever, and even more dependent on speculation on Wall Street.

To resolve a problem, it is necessary to understand its cause. Yet the cause of all the great problems facing the working class, in the United States and internationally—soaring social inequality, the destruction of democratic rights, unending war that threatens to engulf the entire planet—is rooted fundamentally in the stranglehold of finance capital over all aspects of society.

The task of freeing society from the grip of the financial parasites is an existential question for mankind. This task can only be accomplished one way: through the building of a mass political movement of the international working class to expropriate the banks and major corporations, hold the financial criminals to account for their crimes, and reorganize society in the interest of social need, not private profit.