In a report presented at the University of Michigan last Wednesday, “The epidemic of birth defects in Iraq and the duty of public health researchers,” Dr. Muhsin Al Sabbak, a gynecologist from Basra Maternity Hospital, and Dr. Mozhgan Savabieasfahani, an environmental toxicology researcher, reviewed the ever-growing mountain of data showing that rates of cancer, child cancer and birth defects (BD) have reached historically unprecedented levels in Fallujah and other Iraqi cities since the 2003 US invasion.

The presenters argued that the extreme levels of pathological genetic anomalies in Iraqi cities, documented by numerous studies, are being generated by a hellish mixture of nano-particularized heavy metals and other toxins generated by the US military occupation and heavy bombardment of Iraqi cities.

Levels are now much higher than those recorded among survivors of the nuclear attacks on Hiroshima and Nagasaki, the presenters said, citing various studies conducted during the past decade. 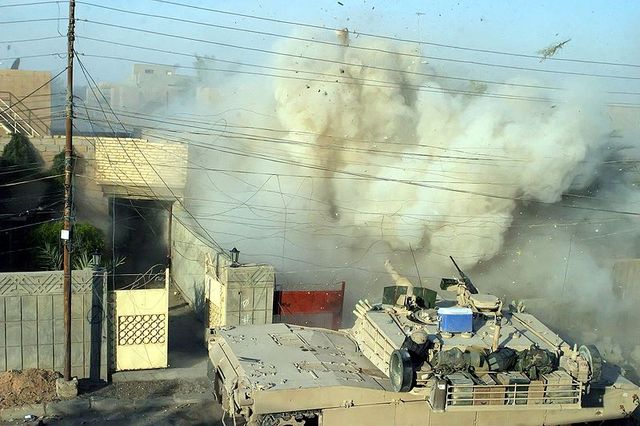 Demolition of Iraqi buildings with a US tank, many of which used depleted uranium shells.

With the US and its allies initiating another round of air strikes against targets inside Iraq and neighboring Syria, including against targets near Fallujah, and with the Iraqi government making no effort to address the problem, there is no reason to expect that the trend will reverse, Al Sabbak said.

“Another assault is coming to Iraq, by both ISIS and those who created ISIS. More fighting will increase toxicity levels in the population,” he added. The well-documented support of the US and its allies for armed Islamist militias like the Islamic State of Iraq and Syria in the war for regime change in Syria has been followed by the use of ISIS’s spread across Iraq as the justification for another imperialist war in the region.

“I am not even political,” Al Sabbak added. “I just want to reverse the spread of this catastrophe. I am tired of hearing mothers ask whether they should even try to have another child, and not knowing the answer myself.”

Dr. Al Sabbak is visiting the US as part of an effort to bring to the attention of both the US scientific community as well as the broader public the horrific impact of decades of US war in terms of the surge of genetic anomalies and disease in Basra. He cited data showing that the Iraqi city experienced a 17-fold increase in child birth defects between 1995 and 2003.

To demonstrate the extreme lead poisoning of Basra’s population, Al Sabbak cited data based on samples from the top layers of Basra children’s tooth enamel, which showed lead levels several times higher than samples of whole teeth from areas not subject to heavy bombardment by US forces.

Birth defects increasingly found at Basra hospitals include limb deformities, stunted extremities, cleft lips and palates, internal organs on the outside of the body, and hands and feet on which all fingers and toes are fused together, Al Sabbak said. 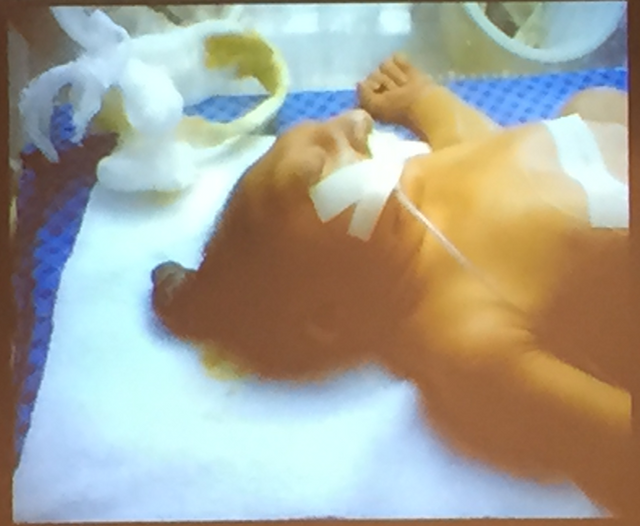 A child hospitalized because of birth defects.

Dr. Savabieasfahani’s report focused on the extreme concentrations of heavy metals, including Titanium (Ti), Magnesium (Mg), Lead (Pb), and Mercury (Hg), in the tissues of sections of Iraq’s population.

In cities most heavily impacted by the war and occupation, such as Fallujah, Basra, and Hawija, the population is experiencing “high and persistent” levels of exposure to these toxic metals, Savabieasfahani said. They are used in the manufacture and firing process of the US military’s bombs, bullets, and explosives.

Exposure to heavy metal nano-particles generated by exploding munitions is a main cause of the rise in CBD and child cancer, Savabieasfahani’s report argued. The nano-particles are inhaled and work their way into internal tissues such as the lymph nodes. The levels steadily build up over time because the body does not eliminate the particles, Savabieasfahani said.

“The heavy metals are more toxic than the depleted uranium,” Dr Savabieasfahani told the World Socialist Web Site. “Titanium, magnesium, lead and mercury are all heavily used by US weapons producers,” she said.

Heavy metals are known to wreak havoc on the human genome, damaging the DNA of egg and sperm cells, Savabieasfahani said. Prenatal exposure to metals causes brain damage, and high titanium levels in children in these areas are strongly correlated with neurodevelopment disorders.

“Cancers are skyrocketing in Iraq. Leukemia is rampant, and rates of numerous genetic pathologies are continuing to rise,” Savabieasfahani told the WSWS.

“The numbers we have currently are probably underestimations. Poor women in many of these cities do not report birth defects because of the associated social stigma,” Savabieasfahani said.

Adding to the fallout from military bombardment, US corporations Halliburton and KBR built massive open-air burn pits, some as large as 10 acres, to destroy as cheaply as possible the vast quantities of waste products generated by the occupation, including dead batteries, electronics, plastics, asbestos products and dead animals and human corpses, Savabieasfahani said.

Samples from smoke produced by a massive burn pit near the US Joint Base Balad—a facility responsible for burning some 147 tons of waste per day—contained a highly poisonous mixture of dioxins, furans, volatile organic compounds, poly-aromatic hydrocarbons, and other poisonous particulate matter, Savabieasfahani reported.

The use of the pits was exposed, Savabieasfahani noted, when US military personnel returning to the US with severe illnesses, cancer, and lung disease claimed that proximity to the burn pits was the cause. High concentrations of titanium are also being found in lung tissue of US soldiers who served in Iraq and Afghanistan, she said.

A 2009 letter from British and Iraqi doctors to the United Nations noted that, “young women in Fallujah in Iraq are terrified of having children because of the increasing number of babies born grotesquely deformed, with no heads, two heads, a single eye in their foreheads, scaly bodies or missing limbs. In addition, young children in Fallujah are now experiencing hideous cancers and leukemias.”

“In September 2009, Fallujah General Hospital had 170 newborn babies, 24 percent of whom were dead within the first seven days, a staggering 75 percent of the dead babies were classified as deformed. Doctors in Fallujah have specifically pointed out that not only are they witnessing unprecedented numbers of birth defects, but premature births have also considerably increased after 2003,” the letter stated.

Fallujah was singled out for the 21st century’s most wanton act of collective punishment, intended by Washington to terrorize the population of Iraq into submission.

In November 2004, the US military launched a premeditated genocidal assault against Fallujah as an act of collective punishment in retaliation for killing of four Blackwater mercenaries. Prepared months in advance, Operation Phantom Fury (OPF) was characterized by indiscriminate use of heavy weapons, including white phosphorous, against densely populated residential areas.

At least 800 civilians were killed in the first eight days of the US blitz against Fallujah, according to a Red Cross report from November 16, 2004. US forces fired indiscriminately throughout the city, damaging 36,000 of 50,000 homes during OPF, according to local officials. A young Iraqi boy trying to escape toxic chemicals with a gas mask.

During the first days of OPF, US forces deployed grenades and artillery rounds loaded with white phosphorous against human targets inside the city, according to media reports. Footage presented in the 2005 documentary film, “Fallujah: The Hidden Massacre,” shows US helicopters carpeting areas of the city with WP during the 2004 assault.

In their study, “Cancer, Infant Mortality and Birth Sex-Ratio in Fallujah, Iraq 2005-2009,” Chris Busby, Malak Hamdan and Entesar Ariabi found that the city experienced a 38-fold increase in leukemia, a 10-fold increase in breast cancer and major increase in adult brain tumors in the years after the 2004 US assault. The authors found that the forms of cancer appearing in Fallujah were “similar to that in Hiroshima survivors who were exposed to ionizing radiation from the bomb and uranium in the fallout.”

During the same period, Fallujah experienced a 12-fold increase in cancers among under 14-year olds and an infant mortality rate in Fallujah eight times higher than that of Kuwait, according to the Busby study. The gender ratio of newborns was dramatically altered in the wake of the bombardments, shifting from 1050 boys for every 1000 girls to 860 boys for 1000 girls, an effect known to occur in fallout areas.

“We know that uranium is genotoxic, that it causes these levels of genetic damage, and because of that it also causes cancer. The only source of uranium was the use by the American-led forces of uranium weapons. Not only depleted uranium weapons, but as we later found out slightly enriched uranium weapons, which we believe they were using in order to cover their tracks,” said Dr. Busby, one of the report’s authors.

The Tokyo-based NGO Human Rights Now similarly found “an extraordinary situation of congenital birth defects in both nature and quantity” in Iraqi cities targeted by the US military. Dr. Sundus Nsaif, an Iraqi doctor based in Najaf, told RT in 2013, “After the start of the Iraq war, rates of cancer, leukemia and birth defects rose dramatically in Najaf…When you visit the hospital here you see that cancer is more common than the flu.”

While recent studies have focused on the years following the 2003 US invasion, birth defects among Iraqi newborns actually began to rise after the First Gulf War in 1991, according to Professor Souad N Al-Azzawi, author of “Congenital Birth Defects in Iraq: Concealing War Crimes against Iraqi Children, Twisting and Distorting the Evidence.”

The US military, during the 2003 invasion, used other weapons with the potential to generate massive toxic fallout, including white phosphorous, modified napalm cluster bombs, GBU laser-guided bombs, MK 84 2000 pound bombs, GBU bunker busters, and “thermo boric” weapons. These munitions create “persistent contaminants such as heavy metal oxides and fumes, radioactive isotopes, and complex synthetic organic gels, fluids, and vapors,” all of which “have the ability to spread out and mobilize to other areas hundreds of miles away through different environmental elements (air jets, winds, water, sand and dust storms,” according to Al-Azzawi.

*50 per thousand live births in at Fallujah General in 2010

The toxicification of Iraq’s environment and complete destruction of its social infrastructure by US imperialism have produced a growing public health catastrophe that constitutes one of the greatest war crimes of the 21st century.