Richest one percent controls nearly half of global wealth

The richest one percent of the world’s population now controls 48.2 percent of global wealth, up from 46 percent last year, according to the most recent global wealth report issued by Credit Suisse, the Swiss-based financial services company.

Hypothetically, if the growth of inequality were to proceed at last year’s rate, the richest one percent for all intents and purposes would control all the wealth on the planet within 23 years. 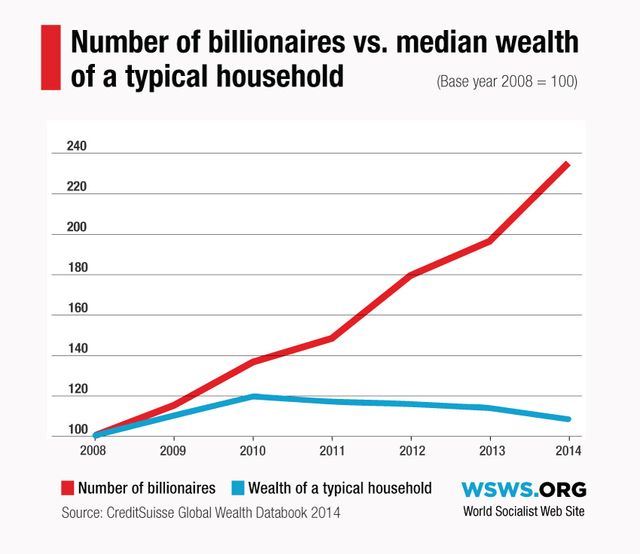 The report found that the growth of global inequality has accelerated sharply since the 2008 financial crisis, as the values of financial assets have soared while wages have stagnated and declined.

“These figures give more evidence that inequality is extreme and growing, and that economic recovery following the financial crisis has been skewed in favour of the wealthiest,” commented Emma Seery, head of Inequality at Oxfam, the British anti-poverty charity. “This report shows that those least able to afford it have paid the price of the financial crisis whilst more wealth has flooded into the coffers of the very richest.”

The growth in inequality is bound up with a worldwide surge in paper wealth, fueled by the trillions of dollars pumped into the financial system by central banks via zero interest rate and “quantitative easing” policies. The total amount of global wealth grew by 8.3 percent over the past year, the highest increase ever recorded, hitting a total of $263 trillion. This year alone, the total wealth of the US grew by $12.3 trillion—about the same amount that was wiped out in the 2008 financial crash.

As the report noted, “The overall global economy may remain sluggish, but this has not prevented personal wealth from surging ahead during the past year. Driven by … robust equity prices, total wealth grew by 8.3% worldwide ... the first time household wealth has passed the $250 trillion threshold.”

Credit Suisse added, “The annual rise of $20.1 trillion … continues a trend which has seen global wealth increase every year since 2008, so that it now stands at 20% above the pre-crisis peak and 39% above the recent low in 2008.”

This ongoing growth in asset values has generated a sharp rise in the number of millionaires. The number of adults with a net worth of over one million dollars increased by 12 percent in the United States last year, from 12.5 to 14.2 million.

In a significant observation, the report directly related the growth of social inequality to the 2008 financial crash. “Our research suggests that countries often experienced a structural break in inequality trends around the time of the financial crisis ... after 2007, wealth inequality has tended to increase.”

In the aftermath of the 2008 crash, state treasuries all around the world were looted to bail out the financial system, while central banks printed money to prop up the values of financial assets held primarily by the rich. Meanwhile, social services were slashed to pay for these bailouts, even as companies used mass unemployment to drive down their employees’ wages. The result has been an unprecedented increase in social inequality. 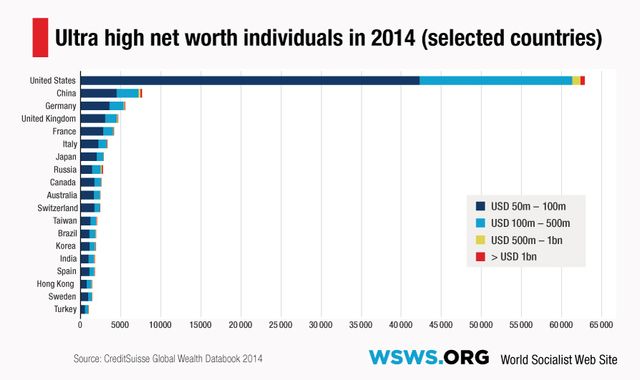 This process was spearheaded by the Obama administration, which heads the most unequal of all the advanced capitalist countries. The US is home to a disproportionate number of what are known as ultra-high net worth individuals, those with a net worth of more than 50 million dollars. The US has half of the world’s ultra-high net worth individuals, twice the number that live in Europe and nearly ten times more than the country with the next-highest total of such people.

The report, issued by a major European financial institution, sounded a worried note. It observed that since the financial crisis, financial wealth has grown much faster than disposable income, which has been constrained by the lackluster state of the real economy.

Noting that the present ratio of wealth to income, 6.5 (i.e., wealth is 6.5 times income), is much higher than the postwar average of less than five, and is the highest level in postwar history, Credit Suisse wrote, “This is a worrying signal given that abnormally high wealth income ratios have always signaled recession in the past.” It added that “the ratio briefly rose above 6 in 1999 during the dot.com bubble and broke that barrier again during 2005–2007,” immediately before the 2008 crash.

The warning from Credit Suisse that the policies implemented over the past six years have only created the conditions for a new financial collapse follow similar statements of concern from other sections of the ruling class—and come amidst a surge in volatility on the global markets over the past week.

However, despite these worried remarks as the world economy approaches a new financial precipice, neither Credit Suisse nor any faction of the ruling class has any solution to a crisis that is rooted in the historic and intractable contradictions of the capitalist system.