Birdman or (The Unexpected Virtue of Ignorance), The Skeleton Twins and St. Vincent are black or at least darkish comedies each of which takes a glancing look at some of the difficulties of American life, or includes these difficulties as part of its frame of reference. This is some sort of advance, one supposes, but let us not thank heaven for small mercies. 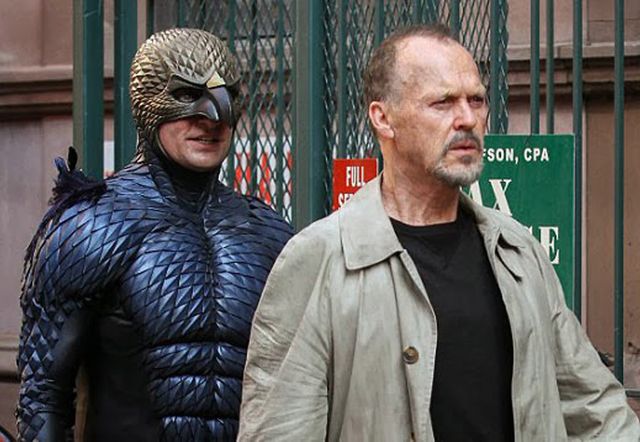 After all, considering the harshness of conditions for so many, no filmmaker with a modicum of honesty or the hope of establishing much credibility could entirely ignore the painful facts of economic and social life.

Nonetheless, neither deciphering nor even addressing this reality is the primary preoccupation of any of these works.

The most ambitious of the three, Mexican-born director Alejandro González Iñárritu’s Birdman or (The Unexpected Virtue of Ignorance), deals with the more or less washed-up star of a superhero franchise attempting to revive his fading career. Craig Johnson’s The Skeleton Twins portrays two unhappy siblings trying to overcome the legacy of parental suicide, while Theodore Melfi’s St. Vincent features a misanthropic, dissolute Vietnam veteran who forms a life-changing attachment to a young boy.

Birdman or (The Unexpected Virtue of Ignorance)

In the Iñárritu (Amores Perros, 21 Grams, Babel, Biutiful) film, Riggan Thomson (Michael Keaton), whose acting career has peaked, hopes that by bringing an adaption of a Raymond Carver short story—“What We Talk About When We Talk About Love” (1981)—to Broadway, he will demonstrate an artistic seriousness absent from his earlier role as the Hollywood superhero, Birdman. 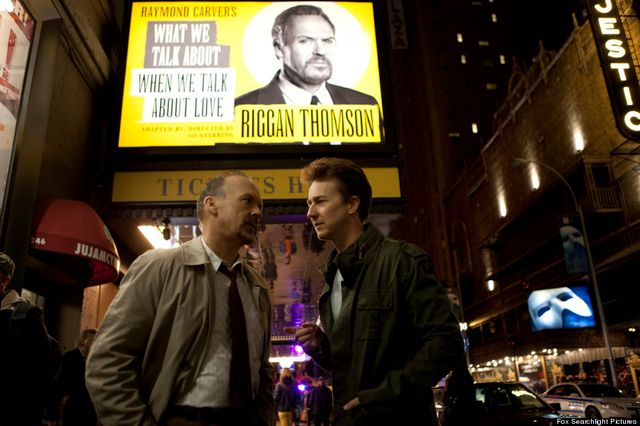 As opening night approaches, one of Riggan’s actors is injured. At the urging of his friend and producer Jake (Zach Galifianakis), he allows his lead actress (Naomi Watts) to recommend Mike Shiner (Edward Norton), a well-known “Method” actor who will boost ticket sales.

Birdman, the 1992 winged Hollywood creature with supernatural powers, is now Riggan’s alter ego, guiding him through the vagaries of organizing a stage success, dealing with his girlfriend and co-star Laura (Andrea Riseborough) and his personal assistant and daughter Sam (Emma Stone), recently released from rehab. Self-doubts and self-reproach accumulate even as an angry Riggan is forced to spar with Mike who tries to steal his thunder and co-opt his play. To make matter’s worse, the New York Times critic swears she will tank his all-consuming effort.

Punctuated by the jazz drumming of Antonio Sanchez, the movie’s action takes place primarily backstage. Cinematographer Emmanuel Lubezki doggedly follows the actors as they march through grim, labyrinth-like hallways and psychologize in their seedy dressing rooms. Iñárritu has captured something about celebrity and artistic insecurity and fragility.

In the film’s opening sequence, the voice of the Birdman asks: “How did we end up here? ... We don’t belong in this s—t hole.” The “hole” in question is Riggan’s dressing room and Birdman’s rhetorical question speaks to the fact that the move from Hollywood superstardom to Broadway, regardless of the level of artistry involved, is viewed as a regression (“My health lasted longer than the money”).

Adds daughter Sam, “You’re not doing this for art, but because you want to be relevant.” Birdman chimes in: “You’re a sad, selfish, mediocre actor grasping at last vestiges of his career.” And Riggan reproaches himself: “This play seems like a minuscule deformed version of myself.”

While some of these lines and moments strike a chord, not much is made of them. They are left to dangle for the most part.

Did the filmmakers have a grander metaphor in mind by creating the figure of a former superhero? The allusion to Raymond Carver, identified with declining economic and cultural prospects in the US; the image of a large, aggressive bird (think American eagle); the career “demotion” (film stardom to struggles in the theater) and the general aura of decay and seediness suggest they may be wanting to say something about America as a whole and its much lowered national expectations. And the use of the name “Riggan,” evocative of the president who helped launch a counterrevolution against the population three decades ago, might fit in somewhere too.

They may very well want to say something, but precisely what? Many of the hints and references and clues end up nothing but red herrings. Iñárritu is a talented filmmaker, who attracts interesting performers and has obvious concerns about the world, but confusion and eclecticism, willful or otherwise, seem to be his watchwords. Essentially the movie, like the rest of the director’s efforts, is a potpourri of occasionally intriguing themes never satisfactorily developed.

Along with some of his other Mexican-born compatriots, Iñárritu is more sensitive and attuned to social hardships than the ordinary US film director or writer at present. That gives him an artistic and intellectual advantage. But, as is the case with some of his other compatriots as well, the element of anger or protest is largely missing in Iñárritu’s work. The world is the way it is. Life is the way it is. Somehow, something must be made out of present human reality, as difficult as it may be, because it is as unalterable as the laws of the solar system. As one commentator, who approvingly calls the Mexican director a “postsecular” director, asserts about Biutiful, it shows “everyday reality, with its social deprivation, its corruption and brutality, yet as enchanted by faith, limned by beauty, animated by belief.”

Iñárritu told an interviewer, “But, in all honesty, I never wanted to make this film from a bitter side … or saying what is right and what is wrong ... To make a film to complain? I would not spend two years or three years of my life doing that. … In a way, I want to feel compassion for all these characters that are full of flaws and have limitations. And that's what it was about for me. Not to preach or complain.” This is not genuine objectivity, it is simply expresses the director’s “surrender to many things,” as he puts it, his essentially noncommittal standpoint.

Birdman ’s swift pace and non-stop goings-on act as something of a smokescreen to divert attention from the weaknesses of character and relationship development. To an unhealthy degree, Iñárritu likes to impress rather than express.

In general, Birdman is entertaining (Keaton and Norton are both excellent), although somewhat overheated. Its dark visual imagery is in line with a penchant for relatively easy, unchallenging pessimism. And because it does not want to linger too long on earthly problems, it solves this dilemma by magically soaring above it all. Perhaps this is what the director means by “the unexpected virtue of ignorance.” But Karl Marx already answered that a long time ago when he noted that “ignorance has never yet helped anyone.”

Writer/director Craig Johnson’s The Skeleton Twins features the talented duo of Kristen Wiig as Maggie and Bill Hader as her brother Milo. As the film opens, both are contemplating suicide. 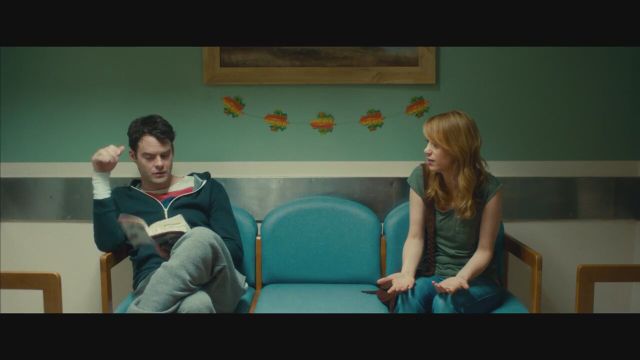 Milo is a gay actor in Los Angeles, whose career has never gotten off the ground. Maggie is a dental hygienist living with her true-blue husband Lance (Luke Wilson) in New York’s Hudson Valley, in the town where the brother and sister grew up. Maggie is bored, frustrated and has affairs, attempting to find happiness in what Milo calls her “Martha Stewart wonderland.” He describes his sister as a “restless housewife with whore-like tendencies.”

After a decade of an unexplained estrangement, Maggie brings Milo to live with her. In a lazy, shorthand effort to blame the siblings’ parents for their dysfunction, the movie has a brief sequence featuring their relatively harmless, New-Age mother Judy (Joanna Gleason). Milo and Maggie believe that her I’m-at-one-with-the-universe attitude can be blamed for their father ending his life by jumping off a bridge. Quite frankly, in the “twins” confrontation with their mother, Judy comes off more sympathetically than do her children. Ty Burrell (from television’s comic series Modern Family ) makes an appearance as Milo’s former high school English teacher and sexual seducer—and potential current love interest. But years after the inappropriate liaison, Rich is still repressed and in the closet.

The movie’s title is drawn from Milo and Maggie’s youth when they received matching Mexican skeleton dolls for Christmas. The significance of this apparently crucial episode remains a closed book. But it barely matters as the movie exclusively revolves around the interplay between Hader and Wiig. The film’s depiction of the chronic discontent of middle class America is little more than a background prop.

Bill Murray plays the title role in Theodore Melfi’s St. Vincent, set in Brooklyn. Vincent is a hard-drinking, ill-tempered Vietnam vet, whose beloved wife (Donna Mitchell) has dementia and lives in a nursing facility he can no longer afford. His nearly valueless house is in shambles and he is a gambler plagued by debt (“You’re screwed [by the banks] and you shall remain screwed”). His quasi-girlfriend is the Russian immigrant pole dancer, Daka (Naomi Watts), who is pregnant and whom Vincent is willing to support—somehow or other. 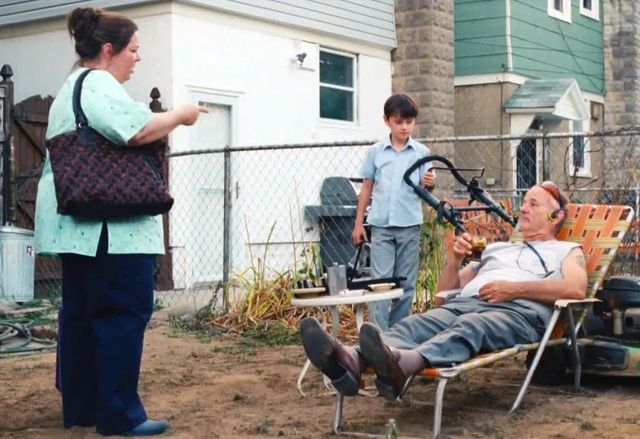 Maggie (Melissa McCarthy) and her endearing son Oliver (Jaeden Lieberher) move in next door to the rude and crude Vincent. An MRI technician, Maggie is divorcing her philandering husband. Astonishingly, she is willing to employ Vincent to babysit her son, whose time spent with the older man includes going to bars and helping him win at the racetrack—and, of course, in the process, transforming the curmudgeon.

In addition, Oliver attends a Catholic school where he is taught by the engaging Brother Geraghty (Chris O’Dowd), who assigns his boys to do a project about a modern-day “saint.” One does not have to be a Mensa member to figure out where this is heading.

In fact, the creators of St. Vincent have hardly left a cliché on the table. And they did not exert themselves much beyond pairing Murray and McCarthy. Despite their talents, the amusing moments here are truly few and far between. The genuine comic element is provided by Watts with her hilarious interpretation of the whore with the golden heart, replete with thick accent and cheesy, skimpy clothes.

All three movies have interesting moments and aspects, but are nonetheless largely superficial and impressionistic. Without thinking carefully or working through their material, the filmmakers organize a general structure (or, to be less charitable, create a gimmick), hire good actors and hope something will gel.

All three films attempt to deal with painful social and psychological questions in a comic, or semi-comic fashion. But the humor is largely based on familiar motifs and tropes, not on the living social and economic process dramatically altering people’s lives, not on what’s new. In each case, in other words, the comic element and the social situation—a mere backdrop—exist alongside one another, not as phenomena intimately connected and acting on one another.

No amount of talent can save such an uninspired and uninspiring arrangement.