Prehistoric rock art in Indonesia dated to 40,000 years ago

On October 9, Nature published a paper providing the results of new dating techniques that have been used to determine the age of prehistoric rock art motifs in volcanic caves on the island of Sulawesi in Indonesia. Archaeologists have determined that some of the art was created at least 40,000 years ago, so that human cave art existed in Southeast Asia as long ago as in Europe.

Archaeologists have long been puzzled about the absence of prehistoric rock art in other places beside Europe, especially since they have already agreed that modern humans were established in South Asia and the Far East by 50,000 years ago. Thanks to new dating techniques, we now know that humans were producing rock art at both ends of the Pleistocene Eurasian world. 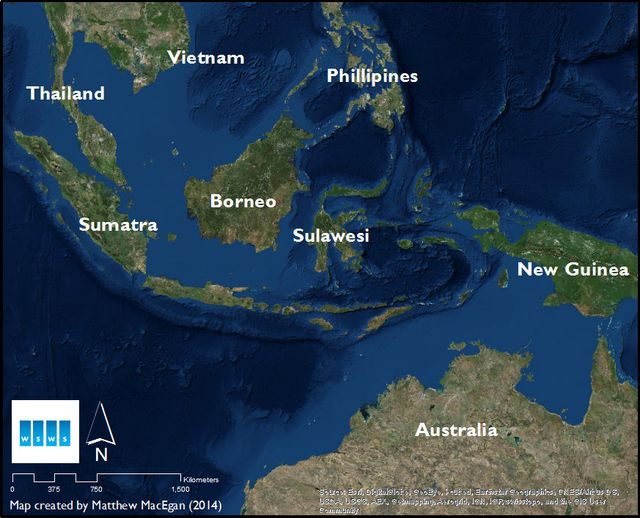 Sulawesi is the world’s eleventh largest island and is located in Wallacea, the zone of oceanic islands that lies between Asia and Australia. The Maros and Pangkep regions, where the rock art has been dated, cover about 450 square kilometers of the island’s southwest peninsula. The caves containing the motifs were carved into the landscape by ancient volcanic lava flows that cut into the limestone, forming clusters of towers that erupt from the plains.

The network of foot caves formed around the bases of the towers were occupied by prehistoric humans who migrated east from Africa. As a result of this discovery, the United Nations Educational, Scientific and Cultural Organization (UNESCO) has added these caves to a tentative list of protected world heritage sites. Final selection to the World Heritage List is based on criteria that demonstrate a site’s importance for the world’s population. 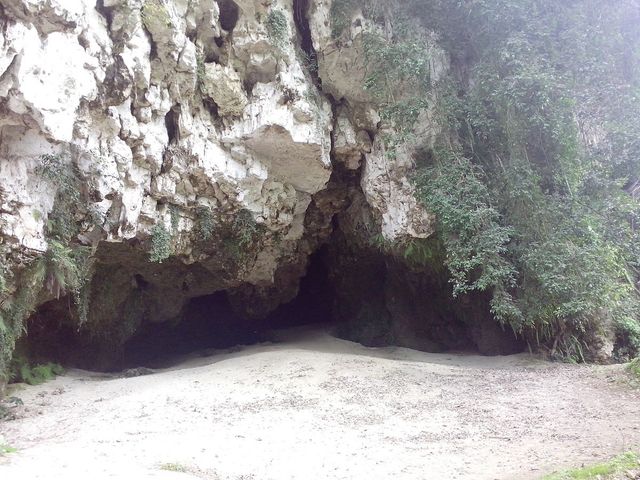 Archaeologists have previously discovered materials used by humans within many of the cave walls and have discovered a total of 90 rock art sites. Previously, the earliest dated evidence for human occupation at Sulawesi came from radiocarbon dates of excavated deposits in two different caves that showed people were using them for habitation approximately 35,000 years ago. Both sites had previously yielded evidence of pigment use, including hematite (iron oxide) crayons and ochre-smeared stone tools, implements that were likely used in the creation of rock art.

The Maros-Pangkep rock art was actually first recorded in the 1950s and has been studied extensively by researchers over the subsequent decades. There are two distinct styles of art within the caves, dated to the Pleistocene period, which extends between 2.58 million years ago and 11,700 years ago. 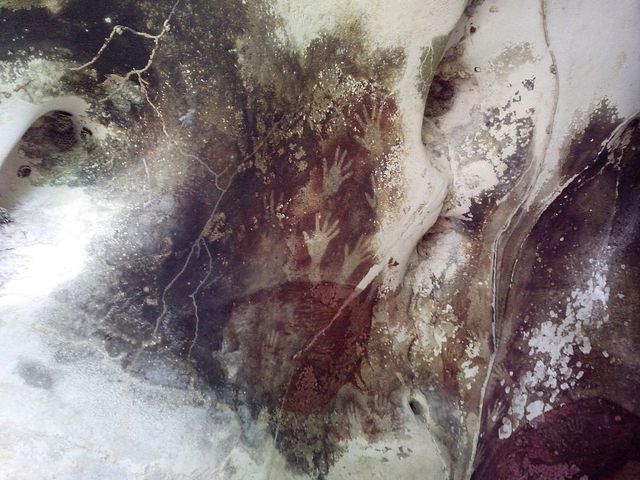 The first consists of human hand stencils made by spraying wet pigment around human hands that were pressed against the surfaces. Pleistocene humans likely placed pigment in their mouths in order to create such a spray. The less common style of cave art found at Maros-Pangkep is characterized by larger, naturalistic profile paintings of wild land mammals that were native to the island during the Pleistocene period.

Both motifs, primarily red in coloration, have typically been found on high roofs and elevated parts of rock walls that are difficult to access. They are often found close to site entrances, but archaeologists have also discovered specimens within deep, dark chambers. The subjects and placements found here often resemble those of European cave art of roughly similar age.

Archaeologists used uranium-series dating techniques to analyze coralloids associated with 12 human hand stencils and two figurative animal depictions from seven cave sites in the Maros-Pangkep caves. Coralloids are small nodes of calcite that form on the surfaces of limestone caves, including on top of and beneath the rock art found in caves.

In cases where coralloid formed on top of paintings, uranium dates provide a minimum age for the underlying rock art. In some cases, however, painters created their art over the tops of coralloids that then continued to grow. Technicians were therefore able to provide both minimum and maximum ages for such motifs.

This dating of rock art in Sulawesi has implications for our understanding of symbolic traditions in the wider region. Similar art styles have previously been discovered in Borneo and other locations in Southeast Asia, and rock art in northern Australia also features hand stencils and paintings of animals. Many of the excavated deposits associated with these motifs have been dated to as far back as 50,000 years ago, and evidence of ochre processing and hematite crayons have also been found in these areas.

These new findings also provide us with new information regarding the origins of Paleolithic rock art, which has previously been dominated by a Eurocentric focus. Archaeologists have generally fallen into two camps regarding the origins of prehistoric cave art. Some argue that rock art originated in Europe and developed over thousands of years, resulting in the more sophisticated representations of animals at Lasceaux and Altamira 20,000 years ago.

Others, including the authors of the Nature article, suggest that cave art developed more broadly, and some even go so far as to suggest that cave painting may have been widely practiced by the first wave of Homo sapiens who left Africa tens of thousands of years earlier.

One limitation of examining rock art is the survivability and deterioration of the motifs over time. The Nature article authors explain in their paper that, even in prehistoric times, rock art was already in an advanced state of deterioration. Local custodians have further reported that the loss of the art has accelerated in recent decades. Many pieces of rock art have undoubtedly disappeared over the millennia, leaving only remnants for archaeologists to analyze.

However, we do have evidence of the use of pigments as early as 400,000 years ago, which were also used in the practice of body painting. In 1999, archaeologists discovered more than 300 pieces of pigment in the Twin Rivers Cave in Zambia. The stratigraphic layer in which the pigments were found also contained Middle Stone Age artifacts and sediment dating to between 400,000 and 200,000 years ago. The pigments were found in a range of colors including brown, red, yellow, purple, blue, and pink that all derived from locally available minerals.

In an interview with National Geographic, Alistair Pike, one of the archaeologists who authored the Nature article, speculated on why prehistoric humans around the world started creating cave art. He explained that in the past one argument “was that when modern humans migrated to Europe, they competed with Neanderthals for caves, which led to a cultural change.”

“What’s clear now is that the phenomenon happened elsewhere,” he continued. “Once modern people left Africa, they might have faced a different environment and social situation [and] different puzzles. They may have had to live in larger groups to survive, which leads to a need for stronger socialization. One way to display rituals and symbols is with cave art.”

His interview also hints at just how similar prehistoric humans were to us today. “Certainly making hand stencils seems a universal human practice. Children love to make handprints, even today. We see them in cave art in different times and places everywhere,” Pike stated. “It could just be that the urge to make cave art is universal.”

He further states that similarities between cave art in Europe and Asia undoubtedly go much deeper. This “is why we need to find more cave paintings,” he explained. In addition, we must obtain the resources and financial ability to perform similar tests on rock art motifs that we already know about. While we know of approximately 90 motifs on Sulawesi, there are, without a doubt, thousands or even tens of thousands around the world, both discovered and undiscovered, waiting to tell us more about our ancestors.