The Syracuse, New York neighborhood that was the scene of a deadly house fire, which killed three people and seriously injured a fourth last month, is dominated by poor housing, high unemployment and poverty, as revealed by reporters for the World Socialist Web Site.

The November 13 fire at 2014 South State Street in the city’s south side neighborhood killed Margaret Settles, 64, her daughter, Santique Settles, 38, and her four-month-old grandson, Marvon Gunn. Shantique Settles’ three-year-old grandson, Shamir Spencer Tape, was rescued from the house by firefighters and was hospitalized in critical condition with smoke inhalation injuries. He has recovered and left the hospital.

The cause of the fire is still under investigation. Neighbors who first noticed the fire at 3:30 am called the fire department, and those living nearby said they heard the smoke alarms blaring from inside the burning home. 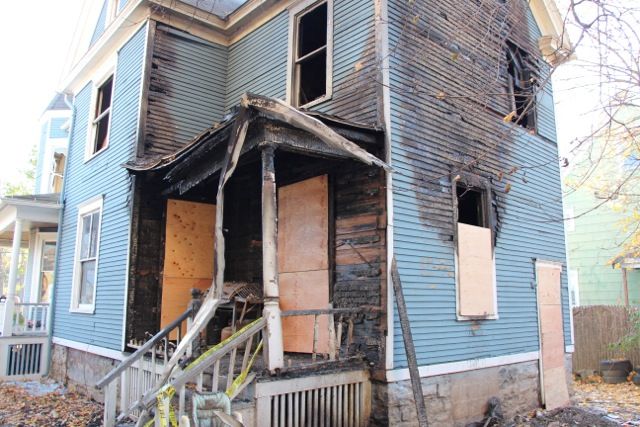 Many of the homes in the area were built before 1950 and are in poor condition. Flames move quickly through the wood-framed homes, like the one with the fatal fire, and a delay of mere seconds in the response time of the fire department can mean the difference between life and death.

WSWS reporters found that the exterior condition of the residence was worn, with peeling paint covering dry and rotted wood clapboard siding. The home likewise didn't appear to be insulated, a common condition in poor neighborhoods, leaving the occupants exposed to cold and drafty conditions.

At one time, 10 people were living in the four-bedroom, one family rental home. Many low-income or unemployed workers live with extended families or friends to save money because of the difficulty finding decent jobs in the heavily de-industrialized city.

This year’s heating season started early with the arrival of wintry weather, which adds additional heating costs to already overburdened families. Many are forced to use electric and kerosene heaters, which increase the risk of fire.

Harry A. Murphy, a notorious Syracuse slumlord and tax dodger, was listed as the owner of this home for over a decade until this and a block of other properties were sold to a number of different buyers for taxes owed to the city. According to court records, Murphy and his son owed approximately $1 million in taxes and penalties on the 84 properties they owned.

In 2011, city lawyers took Murphy to housing court twice over properties that were “so dilapidated, deteriorated or decayed as to present a danger,” according to the web site syracuse.com. Far from being held accountable, the millionaire is directly subsidized by the Onondaga County Department of Social Services, which sends him $400,000 a year in rent payments for tenants on public assistance.

Since the recession of 2008, which threw millions of homes into foreclosure while forcing other homeowners to sell below market value, wealthy investors have bought up large numbers of homes for pennies on the dollar and converted them into rental properties. While doing little or nothing to maintain these properties, the investors have extracted exorbitant rents from people unable to buy a home. The deterioration of these homes then drives down the value of adjacent properties, turning the entire area into an easy target for these corporate vultures.

The home that caught fire was recently sold to a Limited Liability Company or LLC based in Brooklyn, NY while others were sold to other local LLCs formed right after Murphy's tax delinquency became public. As the name implies, an LLC is often set up by business owners to limit their financial exposure if sued. It is very possible that Murphy repurchased the very same properties using a LLC to hide his identity.

The US Census Bureau’s 2012 survey of the 13205 Zip Code where the deadly fire occurred, has a nearly 33 percent poverty rate. For those under 18, the rate is almost 50 percent.

A young mother who has lived in the neighborhood for years in one of Murphy's multifamily apartment buildings spoke to the WSWS. She asked that her name not be used for fear of retaliation, telling the WSWS, “there are roaches and bedbugs in the apartment. It has been months and nothing has been done. No one has been here to do any spraying.”

Many of the rental units add utilities on top of monthly rent. This can add up to hundreds of extra dollars in heating costs per month given the outdated and poor condition of the houses and cold climate of upstate New York.

Neighbors of the fire victims also spoke to the WSWS. They expressed sadness over the tragic deaths of the well-liked family and denounced the miserable housing conditions in the area.

Charles Pierce-El said, “I was aware of the house having a lot of [building] code violations, problems with the roof leaking and much of the wood siding was weathered and rotted, which you can tell looking at it since the fire.

“The loss of life could likely be avoided if we had better code enforcement in Syracuse; if we had better policy and more resources,” Charles added. “Many of the homes in the neighborhood are unlivable but we have people living in them. These are accidents waiting to happen. It seems only with a loss of life will these issues be raised. That’s ludicrous. There is no concern for humanity.”