The wealthiest 400 people in the world saw their combined net worth grow by $92 billion last year, hitting $4.1 trillion. The bonanza for the super-rich was underwritten by governments and central banks around the world, which fueled surging stock markets and record corporate profits by pumping hundreds of billions into the financial markets.

The figures were provided by the Bloomberg Billionaires Index, which was initiated in 2012 and tracks the wealth of the 400 richest people in the world.

The combined net worth of these 400 individuals is greater than the gross domestic product of Germany, the fourth largest economy in the world. The average net worth of each of the billionaires grew by $240 million, to $10.25 billion. 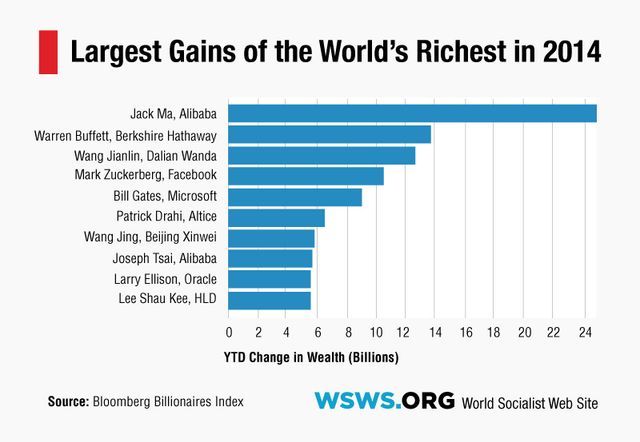 Since the 2008 financial crash, which triggered multi-trillion-dollar bank bailouts and the infusion into the financial system of trillions more in virtually free cash, the wealth of the super-rich has nearly doubled. The net worth of the Forbes list of the 400 richest Americans increased from $1.27 trillion in 2009 to $2.29 trillion in 2014.

Investor Warren Buffett, the world’s second richest man, according to the Bloomberg list, saw his wealth grow to $74.5 billion, up by $13.7 billion, or more than 22 percent, in the past year. Buffett’s wealth has more than doubled since 2009.

Bloomberg noted that “dozens of operating businesses the 84-year-old chairman bought over the past five decades churned out record profit” over the past year. Buffett’s business model has been to buy traditional industries such as railroads and food producers, then ruthlessly cut costs, making billions in the process. Buffett’s businesses have profited handsomely from the ongoing fall in labor costs, which have been dropping year after year since 2008 as a result of falling wages and cuts in benefits for workers.

Commentators did not hesitate to ascribe the growth in the wealth of the super-rich to the continuing infusion of cash by global central banks. This week, European Central Bank President Mario Draghi indicated that the bank would pursue additional stimulus measures, which markets predicted could mean the initiation of US-style “quantitative easing,” where the central bank essentially prints money to buy state bonds in addition to private securities.

Two of the three billionaires who made the most in 2014 reside in China, which is experiencing a stock market bubble, with the country’s FTSE Xinhua 200 index up by 49.49 percent over the past year. Jack Ma, chairman of Alibaba Group, saw his wealth shoot up by $25.1 billion this year, to $28.7 billion, following the September initial public offering of shares in the Chinese Internet trading company he heads.

The wealth of Wang Jianlin, chairman and founder of the Chinese conglomerate Dalian Wanda, nearly doubled over the past year, hitting $25.3 billion, after his company held an initial public offering for its commercial properties division last year. Of the six billionaires whose wealth more than doubled, five live in China.

The financial sector made up a significant share of the Bloomberg list. In addition to Buffett, billionaire investors George Soros and Carl Icahn featured prominently, with $26.1 and $23.6 billion, respectively.

The soaring wealth of the super-rich comes amid growing warnings over the implications of rising social inequality. Last month, the Organization for Economic Cooperation and Development (OECD) published a report noting: “Today, the richest 10 percent of the population in the OECD area earn 9.5 times the income of the poorest 10 percent; in the 1980s this ratio stood at 7:1 and has been rising continuously ever since.”

The OECD reported that the gap between the top 10 percent and the bottom ten percent had reached “around 10 to 1 in Italy, Japan, Korea, Portugal and the United Kingdom, between 13 and 16 to 1 in Greece, Israel, Turkey and the United States, and between 27 and 30 to 1 in Mexico and Chile.” 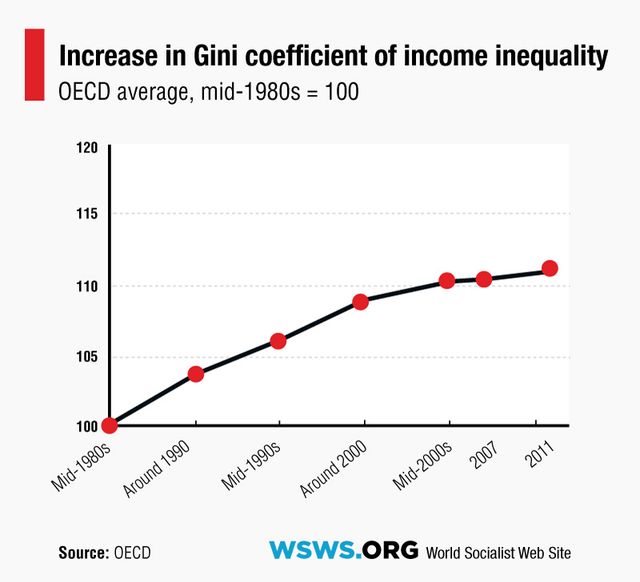 The obscene enrichment of the world’s billionaires and multi-millionaires is accompanied by—and dependent on—the growth of unemployment and poverty around the world. According to a report issued by the International Labor Organization last year, the number of people worldwide without work has hit 200 million for the first time ever. The figure marked a 5 million increase in one year, surpassing 2009’s record high of 198 million.

According to a separate report by the OECD, some 12 percent of the world’s population, or 860 million people, lives in poverty. Some 805 million people were chronically undernourished between 2012 and 2014, according to the United Nations Food and Agriculture Organization.

The ever-greater enrichment of the world’s financial elite is not the byproduct of a general growth in the real economy and development of the productive forces, let alone a broader rise in living standards. On the contrary. The real economy is stagnating or declining, the productive infrastructure of the US and other industrialized countries is being starved of investment and allowed to rot, and the living standards of the broad mass of people are falling.

Today’s financial oligarchs generally make their fortunes on the basis of social plunder and economic parasitism, much of it borderline illegal or outright criminal. Increasingly, the meager benefits and savings of workers—in the form of pensions and other benefits—are being stolen by the corporate-financial elite by means of corporate and municipal bankruptcies and other pseudo-legal forms of swindling.

The Bloomberg report on the super-rich is one more demonstration of the failure of capitalism and the necessity for the working class to overthrow it and replace it with socialism.