After a year in office, the promises made by New York City’s Democratic mayor Bill de Blasio to address the immense problems of homelessness and a grossly inadequate supply of affordable housing have gone unfulfilled.

During the 12-year tenure of his predecessor, billionaire Michael Bloomberg, the city’s homeless population increased between 60 and 71 percent (depending on the source of the statistics). At the end of 2013, the Coalition for the Homeless reported that 53,331 people were sleeping in city homeless shelters. After one year of the de Blasio administration, the total was 58,469, an increase of nearly 10 percent. 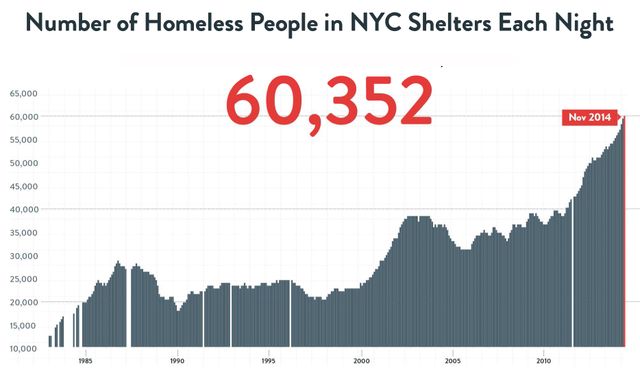 Facts about Homelessness - Coalition For The Homeless

This does not account for those sleeping on the street. Official estimates put that number at 3,300, but homeless advocates say the total is much higher. The de Blasio administration has opened 23 new homeless shelters, barely keeping pace with the rise in the homeless population.

As the WSWS observed a year ago, the continuing rise in homelessness in the city with the largest concentration of billionaires in the world, 103 in 2014, up from 96 the previous year, is paradoxical only to those who refuse to acknowledge that the two phenomena are directly linked.

De Blasio’s past and proposed actions to address homelessness and the critical lack of affordable housing consist of totally inadequate gestures combined with schemes to enrich the city’s powerful real estate interests. Early in his administration, the mayor claimed that he would undertake plans to “build and preserve” 200,000 units of affordable housing over an eight year period. The substance of this vague formulation was a pledge to give $8 billion in city funds to private developers.

The mayor’s real intent was indicated by his appointment of a Wall Street insider at Goldman Sachs, Alicia Glen, as New York’s deputy mayor for housing and economic development.

De Blasio’s programs do not differ fundamentally from those of his predecessors. His rent subsidy program is similar to that of the Bloomberg administration, which put money into the pockets of landlords, but was a failure in stemming the dramatic increase in the numbers of homeless. The plan is focused on providing tax breaks and other incentives to private landlords and developers as inducements for them to provide “affordable” housing, including the infamous “poor door” buildings in which the wealthy have entirely separate entrances and a variety of amenities (e.g. gym facilities) not available to the ordinary tenants.

Among the major factors in the continuing rise in homelessness is the extreme shortage of affordable housing and the exorbitant cost of even what is labeled “affordable.”

The scale of the housing crisis in New York City was reflected recently in the number of applicants for newly available so-called affordable housing. There were 92,000 applications -- nearly double the number anticipated -- for a lottery for “affordable” apartments in two buildings being built in the borough of Queens. 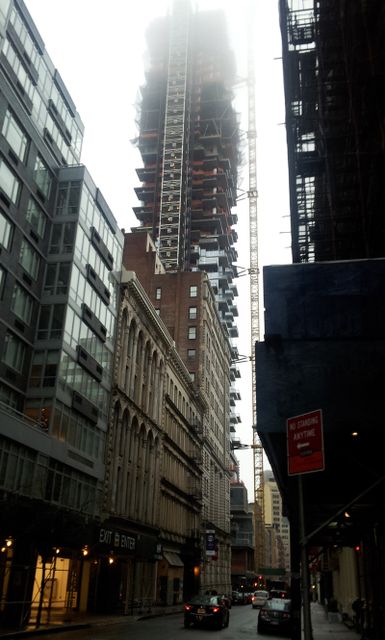 Luxury highrise under construction in Tribeca, one of Manhattan's highest priced neighborhoods

Of the total 942 apartments in these buildings, 738 are designated for people with “moderate” incomes. The monthly rents for these range from $1,561-$1997 for a studio to $2,729-$4,346 for a three bedroom apartment. These prices are below the going market rates for comparable apartments. According to the developer’s advertising materials, moderate incomes begin at over $50,000 annually. Roughly half of the city’s households fall below this benchmark.

This is not an isolated case. In the Williamsburg section of Brooklyn, more than 70,000 applications were submitted for affordable housing in a building with just 38 units. This in an area which, until relatively recently, was considered a refuge from the high cost of housing in more central portions of the city. Earlier in the year, nearly 60,000 applications were received for 105 apartments in Greenpoint, another Brooklyn neighborhood.

The high cost of housing in New York City is devastating for the city’s working class. In the Bronx, for example, with the lowest median income of the city’s five boroughs, and among the lowest in the country, rents consume a substantial portion of earnings, as reported in a recent study by RealtyTrac.com. It found that a three-bedroom apartment costs nearly $2,000 per month, 68 percent of annual mean household income in that borough. This is the highest percentage in the more than 500 counties nationwide examined in the study. The New York State comptroller reported separately that approximately 60 percent of renters in The Bronx pay more than one-third of their income for rent.

Median income in The Bronx is $34,388, the unemployment rate is 9.5 percent, and nearly 30 percent of the population lives below the official poverty line, according the U.S. Census.

The borough of Brooklyn is also among the list of the top five least affordable rental markets in the country, as reported by RealtyTrac.

Apart from high unemployment and stagnant wages, another factor in making the cost of housing increasingly unaffordable for the majority of New Yorkers is a real estate price bubble fueled by wealthy investors, both domestic and foreign. Huge amounts of money are being spent on extravagantly priced houses and apartments as “safe havens” and speculative investments, often by people who will spend little or no time in residence.

A recent study by the city’s budget office found that nearly one quarter of the apartments in New York City are not used as primary residences by their owners, who, therefore, do not pay city income taxes. The percentage is even higher in Manhattan.

Another report, prepared for Douglas Elliman Real Estate, revealed that prices for ultra-luxury apartments have now surpassed what they were prior to the financial crisis. The average in 2014 was $1,718,530 compared to $1,591,823 in 2008.

This trend is creating a chain reaction, driving middle income families into what were once considered “marginal” neighborhoods, thus increasing housing costs there and forcing existing residents either to pay a greater portion of their incomes for rent or move to even more marginal areas or onto the streets.

Even for workers in publicly run housing, conditions are steadily deteriorating. The New York City Housing Authority (NYCHA), which administers the city’s 334 public housing complexes, the largest such system in the country, is facing a $13 billion shortfall in capital funding. This is, in part, due to a dramatic decrease in federal government support. Federal capital grants to NYCHA have declined from $420 million a year in 2001 to $259 million.

Over the next five years, NYCHA will need $16.6 billion simply to address the increasingly squalid conditions to which the 650,000 residents are subjected. Requests for repairs currently go unanswered for months and even years, reaching an all-time high of 430,000 in 2014.

In one example, 16 tenants in the Frederick Douglass Houses, on the Upper West Side of Manhattan, recently brought suit against NYCHA for "deplorable conditions" that include rat and bedbug infestations, collapsing walls and ceilings, a lack of working toilets and sinks, broken radiators, and rampant mold. These conditions have existed for years, despite repeated complaints.

The mayor’s response is to propose a new nonprofit entity to solicit donations from the private sector. In a city with the greatest concentration of wealth in the world and an ever-increasing level of inequality, the government is making the absurd proposal of begging the rich for handouts to keep the public housing system afloat.

Equally ominous for NYCHA residents is de Blasio’s proposal to sell off a 50 percent stake in six of its housing complexes to a private developer, who would co-own the units and supposedly contribute to repairs. The city would pay the private landlord the difference between tenants’ rent and the “market rate.” After 30 years, the private developer would have the option of buying the remaining 50 percent and turning all of the apartments into market rate units, thus further reducing the city’s affordable housing stock. This is merely an initial step toward the total privatization of the NYCHA system, which would leave hundreds of thousands of residents at the mercy of the city’s brutal housing market.

The immense growth of income inequality is the direct cause of the growth in homelessness and the broader housing crisis. The minuscule, cosmetic efforts by the “progressive” de Blasio administration do nothing to address this fundamental cause of the problem. They will put more money into the pockets of real estate developers and landlords, while a growing portion of the city’s population will face increasing difficulty keeping a roof over their heads.