Oxfam: Richest one percent set to control more wealth than the bottom 99 percent

The richest one percent of the world’s population will have more wealth next year than the other 99 percent combined, according to a report issued Monday by the Oxfam charity. The report shows that, far from moderating or reversing, the pace at which the global financial oligarchy is monopolizing society’s wealth is increasing. 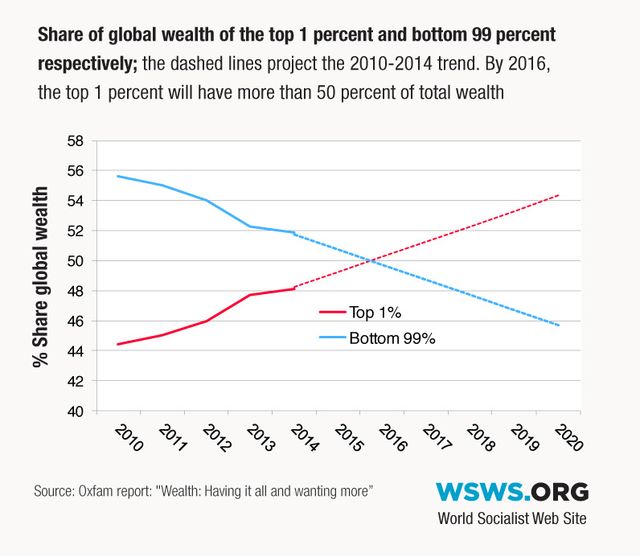 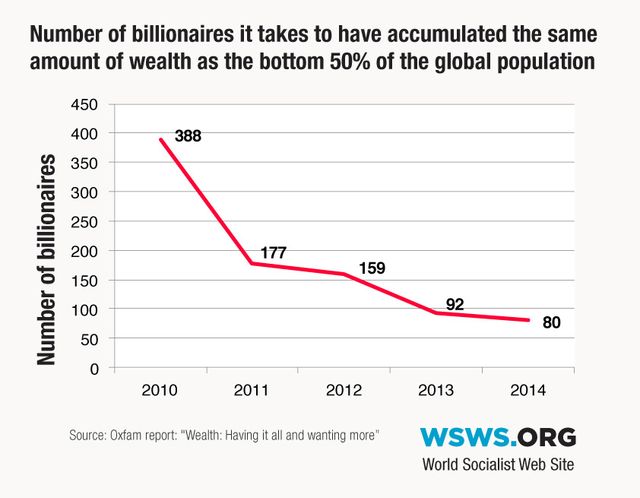 Oxfam timed the release of its report to coincide with the opening of the World Economic Forum in Davos, Switzerland. Some 1,700 private jets are expected to descend on and around the resort town, bearing about 100 billionaires and over 2,000 corporate executives, celebrities, central bankers and heads of state. They will be joined by a small army of journalists.

Other participants will include Jack Ma, who made $25 billion in the initial public offering of Alibaba last year, and Bill Gates, the world’s richest man. Google’s Eric Schmidt, with a net worth of some $8 billion, will co-chair the forum. Some 4,500 Swiss military personnel will be deployed to protect the 2,500 attendees.

The millionaires and billionaires assembled at Davos, to whom Oxfam is appealing, constitute the very social layer whose obscene enrichment is decried in the group’s report.

The growth of social inequality documented in the report is the consequence of policies enacted by the ruling class in the aftermath of the 2008 financial crisis, which a significant share of this year’s Davos participants helped trigger. Governments responded to the collapse of asset values and the insolvency of major banks by pumping some $12 trillion into the financial markets by means of bank bailouts, near-zero interest rates, and central bank money-printing (quantitative easing).

This virtually free cash was used to drive up the world’s stock markets and corporate profits to record highs. The same governments and central banks pursued brutal austerity policies against the working class, driving tens of millions into poverty.

The day the Oxfam report appeared, bankers and speculators around the world were rubbing their hands in anticipation of an expansion of quantitative easing by the European Central Bank at its policy-setting meeting this week.

The Oxfam report notes that “2010 marks an inflection point in the share of global wealth” going to the top one percent. This was also the year that the US Federal Reserve’s money-printing operation was expanded with the Fed’s second round of quantitative easing.

Oxfam, citing figures from Forbes, noted that there were 1,645 billionaires in the world, nearly thirty percent of whom (492 people) live in the United States. “Billionaires from the US make up approximately half of the total billionaires on the Forbes list with interests in the financial sector,” the charity wrote.

In a reflection of the parasitism that has become embedded in the world capitalist system, the financial and insurance sector minted more billionaires than any other industry. The report states: “Since March 2013, there have been 37 new billionaires from these sectors, and six have dropped off the list. The accumulated wealth of billionaires from these sectors has increased from $1.01tn to $1.16tn in a single year, a nominal increase of $150bn, or 15 percent.”

Oxfam Director Winnie Byanyima will be one of the co-chairs of the Davos event, along with World Bank President Jim Yong Kim and Google’s Schmidt. The charity declared, “Byanyima will use her position at Davos to call for urgent action to stem this rising tide of inequality, starting with a crackdown on tax dodging by corporations.”

The attempt to present the gathering at Davos as a forum for addressing social inequality takes on an absurd and grotesque character. In the press release announcing its report, Oxfam quotes Lady Lynn Forester de Rothschild, the chair of the Coalition for Inclusive Capitalism, as saying: “All those gathering at Davos who want a stable and prosperous world should make tackling inequality a top priority.”

Lady Rothschild is married to British financier Evelyn de Rothschild, whose net worth is estimated at $20 billion. She spoke at an Oxfam event Monday. The press release for the event declared, “Inequality is spiraling out of control, but consensus on taking action against this issue of our time is gathering pace. From…Barack Obama to Pope Francis, there is clear agreement that extreme inequality is damaging societies, governance and economic growth.”

These warnings about the growth of inequality are rooted in fears within the financial aristocracy that the ever more obvious and repulsive gap between the super-rich and everyone else will have revolutionary consequences.