Income inequality soars in every US state

Income inequality has grown in every state in the US in recent decades, according to a new study published this week by the Economic Policy Institute. The report, entitled The Increasingly Unequal States of America, found that, even though states home to major metropolitan financial centers such as New York, Chicago, and the Bay Area had the highest levels of income inequality, the gap between the rich and the poor has increased in every region of the country.

“It doesn’t matter if you’re looking at Hawaii or West Virginia or New York or California, there has been a dramatic shift in income towards the top,” said Mark Price, an economist at the Keystone Research Center in Harrisburg, Pennsylvania, and one of the study’s co-authors, in a telephone interview. To varying degrees, this phenomenon was expressed throughout the country. In only two states did the income of the top one percent grow by less than fifteen percent.

“Most of what’s driving income growth are executives in the financial sector, as well as top managers throughout major corporations,” said Dr. Price. “Those two together are the commanding heights of income in this economy.”

Dr. Price and his co-author, Estelle Sommeiller, based their study on the methods of Thomas Piketty and Emmanuel Saez, whose widely-cited research analyzed the growth of income inequality for the United States as a whole. Using state-by-state data from the Internal Revenue Service, much of which had to be compiled from paper archives dating back almost a century, Price and Sommeiller were able to make a state-by-state analysis of income inequality since 1917.

New York City is the home of Wall Street and boasts more billionaires than any other city in the world. Connecticut is home to many of the largest hedge funds in the world. Ray Dalio, the founder of Westport, Connecticut-based hedge fund Bridgewater Associates, earned $3 billion in 2011 alone.

In California, the most populous US state, the top one percent received an average income of $1,598,161, which was 34.9 times higher than the average pay of the bottom 99 percent. In 2013, four of the highest-paid CEOs in the United States were employed by technology companies, which are disproportionately located in California. At the top of the list was Oracle CEO Larry Ellison, with a current net worth of $53.4 billion, who made $78 million in pay that year.

Yet despite the broad disparity in the relative concentration of the ultra-rich, every single state showed a pronounced and growing chasm between the wealthy few and the great majority of society. In Alaska, which has relatively high wages and few billionaires, the incomes of the top one percent were on average more than fifteen times higher than the bottom 99 percent.

Price added, “As the incomes of CEOs and financiers are rising, you’re starting to see that pull, almost like a gravity starting to pull up other top incomes in the rest of the economy.

“A University president might claim, ‘I run a big institution, you expect me to raise money from some of the wealthiest people in the country, you’ve got to pay me a salary that helps me socialize with them.’”

Nationwide, the income share of the top one percent fell by 13.4 percent between 1928 and 1979, a product of the New Deal and Great Society reforms, as well as higher taxes on top earners. These measures were the outcome of bitter and explosive class struggles. But in subsequent years, that trend has been reversed.

As a result, income inequality in New York State was even higher in 2007 than it was in 1928, during the “roaring 20s” that gave rise to the Great Depression. In the period between 1979 and 2007, every state saw the income share of the top 1 percent grow by at least 25 percent. 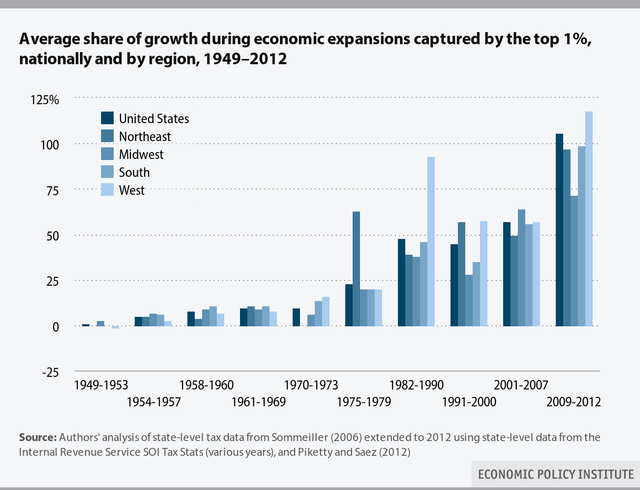 Citing a previous study by the Economic Policy Institute, the report noted that “between 1979 and 2007, had the income of the middle fifth of households grown at the same rate as overall average household income, it would have been $18,897 higher in 2007—27.0 percent higher than it actually was.”

The enormous growth of social inequality is the result of an unrelenting, decades-long campaign against the jobs and living standards of workers. Under the Obama administration, the redistribution of wealth has escalated sharply, through a combination of bank bailouts and “quantitative easing,” which has inflated the assets of the financial elite.

These policies have been pursued by both parties and the entire political establishment, which is squarely under the thumb of the corporate and financial oligarchy that dominates American society.