A fire that broke out in Moscow on the evening of January 30 destroyed the building of the most important social science library in Russia, the Academic Institute for Scholarly Information on Social Science (INION). Around 2 million books and manuscripts were burnt. The extent of the damage is yet to be confirmed. The fire is not only a tragedy for science in Russia, but also internationally.

The Russian oligarchy is entirely to blame for the fire. 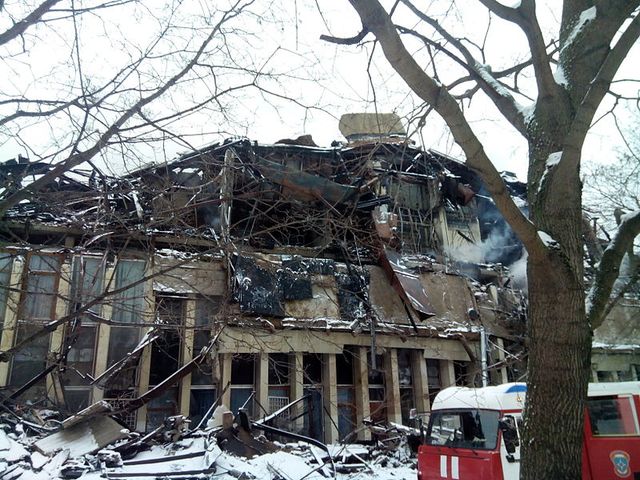 The fire broke out at 10 p.m. on January 30 on the second floor of the building and could only be extinguished the following evening. Within this time, it consumed 2,000 square metres, causing extensive damage. The roof of the building later collapsed.

A total of 147 firemen were deployed for almost 24 hours to put out the fire (a video of the fire can be seen here). The police assume that the fire broke out due to the short-circuiting of an electric cable. Arson was also not ruled out as a possible cause.

Since all of the library’s employees as well those of the German Historical Institute of Moscow (DHIM), which is in the same building, had already gone home, no one was injured in the catastrophic fire.

The tragedy of the fire is difficult to overstate. INION is composed of around 14 million volumes and is one of the largest social science libraries in Europe.

Most of the volumes were luckily stored in the basement, beyond the reach of the fire. But 15 to 20 percent of the collection was irreparably destroyed by the flames. It remains unclear how bad the water damage was due to attempts to extinguish the fire. The library’s director, Yuri Pivovarov, stated that that with the use of appropriate technology, the majority of water damage could be rectified. Various institutes from Russia and other countries have already offered their assistance.

In an interview on February 3, Pivovarov declared that, to date, no location had been found where the library’s archives could be stored.

Assistance in finding new workspace was also offered by many institutes to the German Historical Institute of Moscow. The DHIM’s library, which has the most comprehensive collection of modern works on Russian-German history, was not damaged in the fire.

The chairman of the Russian Academy of Sciences, Vladimir Fortov, described the fire as the “Chernobyl of Russian science.” Alexei Ryabinin, professor for Russian and international history at the Moscow Higher School of Economics, stated that the fire was a “tragedy for international science.” Ryabinin declared, “The catastrophic fire in the INION building is a huge shock for scholars around the world. A massive collection of unique literature in many languages made INION not just an achievement of Russian scholarship, but all of humanity.”

The collection is by far Russia’s most significant. It comprises rare editions of works from the sixteenth to the early twentieth century, as well as numerous volumes from the twentieth century in European languages that do not exist in either France or Germany. In addition, the library also holds the complete archive of the League of Nations, the United Nations, and UNESCO and documents from the US Congress since 1789, the British parliament from 1803 and the Italian parliament since 1879.

According to the latest indications, the Russian edition of all of the documents from the UN General Assembly, international handbooks and lexicons, documents from the International Court of Justice, and part of the library’s department for world literature in foreign languages, as well as the institute for research into Slavic language and culture were destroyed. In the latter case, the majority of these editions were only to be found at INION.

The library was founded by the Soviet government in 1918 and quickly expanded to become the Soviet Union’s largest library. It was shortly afterwards integrated into the Academy of Sciences and has been administered since 1936 by the presidium of the Academy of Sciences. In 1969, it was renamed INION and since 1974 has been based in the building that has now been destroyed. Even after the dissolution of the Soviet Union, INION remained Russia’s largest social science library. It had around 49,000 members and around 330 employees.

INION was perhaps the most important research institute for scholars in Russia. Precisely due to the massive cuts made in the area of culture since 1985, and especially after the Soviet Union’s dissolution in 1991, libraries across the country were bled dry and resources for serious research were hard to come by. INION stood out because all volumes were freely accessible. The library’s catalogue, which unlike all other libraries and archives in Russia was visible to the public, was fortunately undamaged in the fire.

Hardly a single historian or social scientist who has researched Russian history and culture could conduct their research without INION. The library has 874 partners in 69 countries around the world and participates in an international book exchange programme.

Whether the building will be rebuilt or the library accommodated at a new location remains unclear. The director Pivovarov stated that the reconstruction of the building would take several years and depended on the government’s desire to do so.

The full responsibility for this catastrophe lies with the criminal oligarchy that emerged from the Stalinist bureaucracy and the destruction of the Soviet Union.

The fire itself as well as its terrible consequences were entirely avoidable: the fire risk in the building had been known for a long time. But as with almost all other academic and cultural institutions, INION has been financially bled dry since 1991. The long overdue renovation of the building or a move to a new one was unaffordable for the institute in Moscow, the city with the highest number of billionaires in the world.

In March 2014, a fire safety inspection found seven regulatory breaches and gave INION a deadline of January 30, the day when the fire broke out, to rectify the problems. A technical worker at INION commented to the online newspaper Gazeta.ru, “What do you expect, the building is from 1974. The wiring has not been changed since then.” According to the employee, the March 2014 inspection did not include a review of wiring.

According to the library’s director, Pivovarov, the antiquated system for extinguishing fires was found to be faulty by the inspection. He told lenta.ru, “We have been raising the issue [of a modern fire extinguishing system] with the Academy of Science for decades and requested the necessary funding. But the constant lack of financing made it impossible to resolve this issue. The Academy simply did not have the money for it.… The state did not give any money in the 1990s or in the 2000s.”

The impact of the fire could also have been prevented or at least restricted if, for example, the volumes had been digitised. But government funding for digitising the collection of this unique library was so small that it would have taken 100 years to complete the entire collection. Only a few thousand volumes were digitised each year—by the beginning of 2015 amounting to 7,000, and only those from Russian authors.

The INION fire is ultimately a consequence of the social counterrevolution implemented with the restoration of capitalism, through which not only the social conditions of the working class, but also culture and science, have been totally undermined.

After the Russian Academy of Science was reformed in 2013 as an independent institute, practically ceasing to exist as an academic institution after decades of cuts, the most significant social science library in the country has now been partially destroyed and will be only partially accessible for months, if not years.