Oil refinery workers in the United States are nearing the end of the third week of their strike over safety conditions, pay and benefits. On Thursday, negotiators for the United Steelworkers (USW) rejected the seventh offer from lead industry bargainer Shell. The content of the offer, the first made by Shell since February 5, was not revealed by the USW. However, it must have been so insulting the USW felt rank-and-file workers would never accept it. 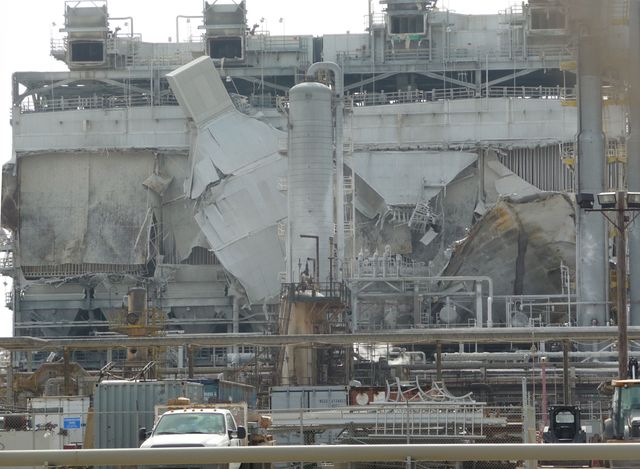 The site of the explosion at the Exxon refinery in Torrance, California

Despite the intransigence and arrogance of the oil giants, the USW refuses to expand the strike, which it has limited to only 5,200 of the 30,000 oil workers it organizes. The mood on the picket lines remains determined. Many workers realize that they are striking not just for themselves but for all workers who have suffered eroding living standards and working conditions even as corporate profits hit record levels. The explosion at ExxonMobil’s Torrance, California refinery Wednesday also bolsters their fight against overwork and understaffing. 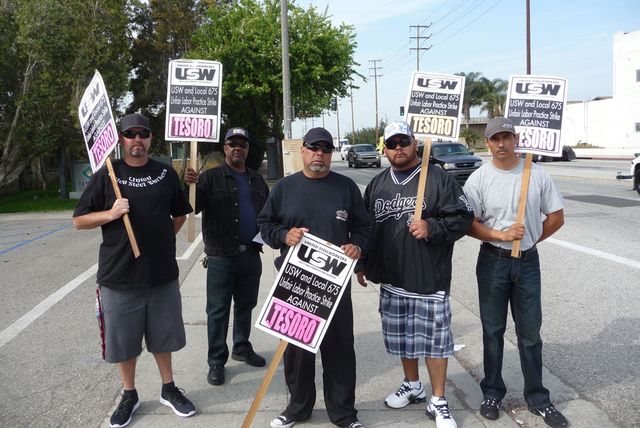 The Obama administration is closely monitoring the strike and wants the USW to shut it down as soon as possible. The president has intervened against 20,000 West Coast dockworkers, with his labor secretary ordering the International Longshore and Warehouse Union (ILWU) to reach a settlement with the Pacific Maritime Association, which has repeatedly locked out workers.

While the USW has sought to impose a media gag order on striking workers, oil workers and their supporters have increasingly turned to social media. The comments section of the USW Oil Worker Facebook page is overflowing with comments calling for a national strike and denouncing the USW for emasculating the struggle.

Christopher James Jones writes, “Close the other refineries and quit playing games!” to which two workers responded: “I agree! How many middle fingers do we need to take before we take action!??” and “Yep. Its time to strike at ALL sites.”

Another worker, Cedric Graham, posted, “It is time for the union to take the gloves off and pull any plants on rolling 24’s. A week off from negotiations while families are burning through savings and basically begging the local for help while dues are deducted is unacceptable.”

Kyle Olson writes, “It’s pathetic, pull more refineries or get off the pot. Our ‘strike’ isn’t hurting these companies at all, just the union employees that are feeling the hardship from not working. And with the union not willing to pull the trigger on other refineries it leads us that are out to believe that it’s all for nothing. Be big boys and get our voices heard by the oil companies by PULLING MORE REFINERIES!”

Workers in the United States have been battered by years of wage stagnation and decline. Last year the National Employment Law Project released two separate reports that detailed this. One, released in November, showed that manufacturing jobs saw a 21.05 percent wage drop between 2003 and 2013. The other, released earlier in the year, found that a disproportionate number of jobs created during the so-called “recovery” (2009-present) pay less than $13 an hour.

Like the United Auto Workers and other unions, the USW has long collaborated with the corporations to slash labor costs in order to boost “competitiveness” and profitability. Obama appointed USW President Leo Gerard to a joint labor-management committee to accelerate this cost-cutting process in the energy and manufacturing sectors.

The USW’s Facebook page has been flooded with likes and messages of support and solidarity. Many comments denounce the irrationality and greed of the major oil companies, who made more than $90 billion in profits last year. Tammy Letts wrote, “I support you! Oil corps don’t give a damn about workers, environment or humanity.” Another, Matt Smith, writes “The American working class is behind you 100%.”

One commentator, Neal Gomez, apparently a USW member, wrote “Yeah… these companies have made RECORD BILLIONS in the last decade but refuse to share that prosperity with the workers who make it happen, often in hazardous environments!!! Cutting jobs, retirement pkgs, paltry wages, etc; and ever increasing overtime by reduced staffing, hiring, unskilled (often dangerous!) labor to perform maintenance…simple greed!!!.”

Gomez continues, worrying about the heads of the union, “Now if only they [the oil companies] don’t buy our international reps out and sell us down the river again!!!!” Writing in another USW post, Gomez writes “SOLIDARITY!!! Let’s just hope International [the USW’s International Executive Board] doesn’t sell a ‘few’ of us out!!!! IF there’s strength in numbers, then take us ALL OUT!!!! No one wants a strike, but petty cash n t-shirts only go so far when we have some of our Union brothers and sisters walking picket!!! Let’s drop the hammer!!!”

Many workers have also expressed frustration with the lack of help for striking workers from the USW as well as the general secrecy and inaccessibility of the negotiations. Ashley Salinas writes on the USW oil worker page, “Is there not a strike fund pay that kicks in after a month of strike? Bills are piling up and groceries aren’t free. Where do we turn for help?” Another worker replied to her, “There is definitely a fund for help, but the way it is allocated is very interesting...make sure to go to the local to inquire ASAP.”

Cheri Nicole Davidson-Henderson expressed feeling “in the dark” about issues in the contract negotiations. She wrote, “A little more communication would be nice, but in the meantime lets stop playing games with these small threats.”

These comments vindicate the warnings the WSWS gave about the treacherous role of the USW and the need for workers to take control of the conduct of the strike.

As the WSWS has previously noted, “The continued sabotage of the strike by the USW is the greatest danger workers face… New organizations of struggle, including rank-and-file strike committees, must be organized to set up pickets at every refinery, chemical plant and oil terminal to shut the entire industry down. At the same time this fight must be linked up with West Coast dockers, teachers, auto workers, and other sections of the working class in opposition to the corporations and both big business parties.”

The 2015 US oil workers strike