Two stories of German resistance: The Resistors “their spirit prevails ...” and 13 Minutes

This is the fifth and final part in a series of articles on the recent Berlin international film festival, the Berlinale, held February 5-15, 2015. The first part was posted February 19, the second part February 21, the third part February 25, and the fourth part on February 27.

The German documentary The Resistors “their spirit prevails ...” is the sequel to The Resisters—Testimony of the White Rose (2008), by Katrin Seybold, in which contemporary witnesses chronicled the student resistance movement against the Nazis led by Hans and Sophie Scholl. Following the death of the director in 2012, Ula Stöckl assembled the present film from Seybold’s extensive interview material about the continuation of the resistance movement following the Scholls’ arrest and execution. 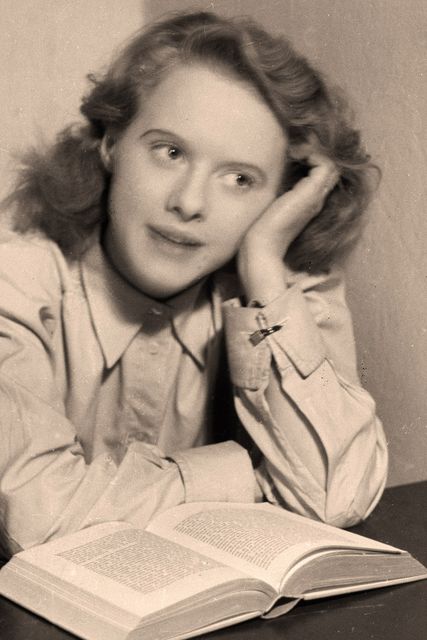 The Resistors “their spirit prevails ...”

The film reveals that after the Nazis were defeated in Stalingrad in the beginning of 1943, Hitler began to lose the support of wider layers of students, the future social elite. They demonstrated less and less willingness to allow themselves to be used senselessly as cannon fodder. The threat of harsh punishment discouraged few from secretly listening to the BBC’s radio broadcasts and, in light of the latest defeats, hoping for a swift end to the war.

A group formed around student Hans Leipelt decided after the Scholls’ execution to continue distributing the White Rose movement’s sixth leaflet. It called for the overthrow of Hitler following the loss of “the men of Stalingrad.” In addition to Munich, it appeared in Berlin and Hamburg, typed up in secret again and again. Risking their lives, the students provided financial support to the family of the executed Professor Kurt Huber, who was the principal author of the leaflet. When the Gestapo got wind of this, arrests followed. Hans Leipelt was executed at the beginning of 1945. Others survived only because the war ended before they could be put to death.

The film does not hide the pragmatic character of the resistance. One learns that Leipelt, the son of a respected family, had volunteered for duty as a soldier in the campaign against Poland and France and was awarded the Iron Cross for his service. Only after the Nazis declared him half-Aryan, dishonorably discharged him from the military and threatened his career in civilian life, did he develop into a radical opponent of Hitler.

One gathers that the opposition of the students was not so much directed against fascism as such but rather, in the words of the leaflet, against the “dilettante” Hitler, whose course led to national suicide. Among the students, according to one recollection, the idea became popular that one of the leading Nazis would have to “realize that one cannot continue in this way.” 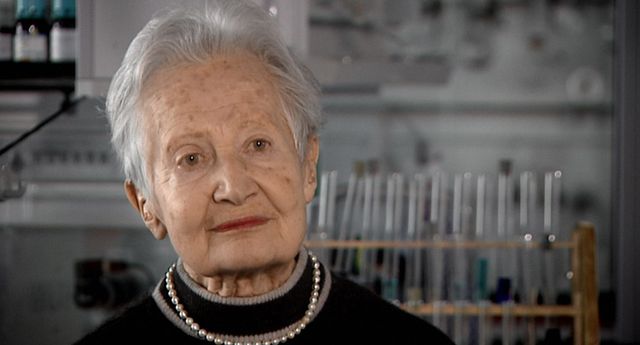 The Resistors “their spirit prevails ...”

One interviewee recalled that after her arrest she sincerely believed her fiancé, an important staff member at the arms manufacturer Messerschmitt, would be able to visit her in prison, owing to his firm’s close connections to the Führer.

The students involved were primarily the children of mostly better-off families, whose parents had greeted Hitler’s promises to break the shackles of Versailles and lead Germany to new heights on the stage of world politics as the basis of their own prosperity. The children grew up with this conception of the Hitler dictatorship and suddenly saw themselves as being deceived and robbed of their future. Terror spread through the previously supportive middle classes, who saw that in spite of a clearly looming defeat, Hitler held fast to his program of “total war.”

One of the Hitler critics whom the students highly revered was the professor Kurt Huber, whose form of opposition, aimed more at reforms within fascism, the film does not address. Of Huber’s “antifascism,” explains author Klaus Weber: “He was opposed to the system of German fascism because it had lost its ‘decency’ and ‘truth.’ He had never been a convinced antifascist.”

Another idol of the students was Heinrich Otto Wieland. One learns that thanks to Wieland, a number of students classified as half-Aryan were able to continue studying or work in his chemistry institute. The Nobel Prize winner even appeared in solidarity with the accused students during the proceedings at the Nazis’ people’s court. What is not mentioned is how Nazi opponent Wieland served during the First World War. He had developed chemical weapons such as mustard gas and so-called “mask breakers” to be used in gas warfare on the western front.

At the end of the film there is a criticism of the German Democratic Republic (GDR). According to one of the students interviewed, the regime only acknowledged the resistance of the German Communist Party against Hitler. In fact the Stalinist GDR-leadership did exploit antifascism in order to justify the dictatorship of the ruling Socialist Unity Party in East Germany over a population supposedly deluded by Hitler. But while the GDR tended to dismiss any non-communist opposition, the political elite in the West did the opposite. In order to justify the Nazis in its own ranks after the war, the political establishment in West Germany largely erased communist opposition from the history books in favor of the “honorable opposition” of longstanding Nazi supporters such as Stauffenberg and those behind the assassination plot of 1944. While the film jibes at the GDR, it makes no serious attempt to really probe the background and motives of those who fell out with Hitler. 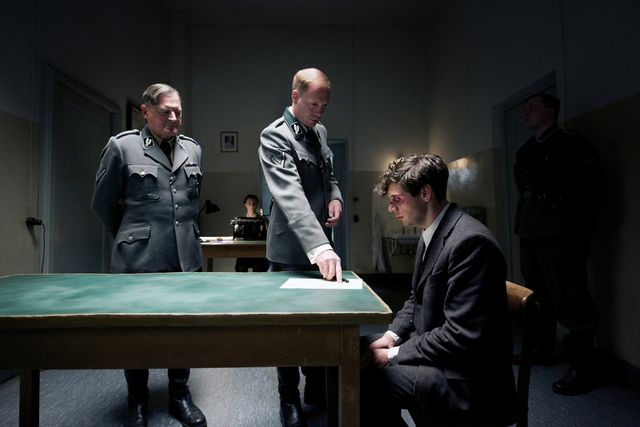 Georg Elser was a Swabian carpenter who on November 8, 1939 attempted to assassinate Hitler by planting a bomb in the Munich beer hall known as Bürgerbräukeller. Hitler only narrowly escaped. Unlike the White Rose movement or the conservative circle around Claus von Stauffenberg, the military officer who attempted to kill Hitler in a bombing on July 20, 1944, Elser was not officially recognized for decades. Elser represented an opposition from below, originating in the milieu of small craftsmen and workers.

The feature film 13 Minutes, by Oliver Hirschbiegel (Downfall, 2004), contradicts some of the common clichés about Nazi Germany. Hirschbiegel doesn’t portray the Nazi dictatorship as an invincible monolith whose fanatical Führer was worshipped by the people. Shortly after the beginning of the war in 1939, Hitler appears rather nervous.

Elser’s interrogators are convinced that he could not have acted alone. The more he insists, the more brutally they torture him. In the Dachau concentration camp, the special inmate Elser is put through a show trial intended to serve as a deterrent to the masses. After Elser’s execution, shortly before the liberation of Dachau, it is carefully ensured that his death is presented to the public as an “accident.” The order for this falsification is then alleged to have been immediately destroyed. 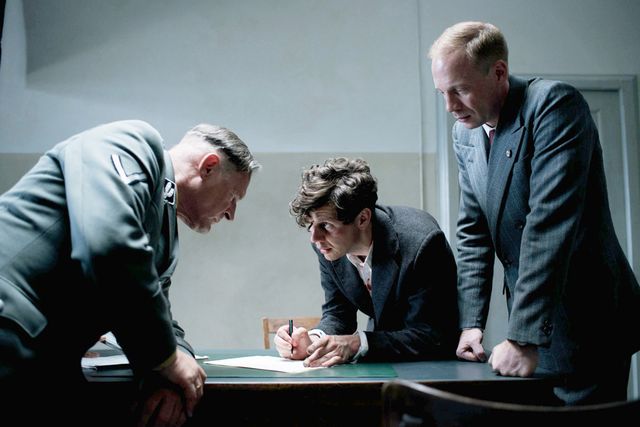 Today it is generally accepted that Elser acted alone. But, unlike the films Der Attentäter (The Assassin, 1969), by Rainer Erler, or Georg Elser-Einer aus Deutschland (released internationallly as Seven Minutes, 1989), directed by and starring Klaus Maria Brandauer, Hirschbiegel’s film suggests that Elser was not alone in spirit. Nationalist race theories did not appear to have any great influence in his environment. The new power structure took far more pragmatic forms, which take on another dimension in the form of the confrontation between Nazi and German Communist Party members.

Hirschbiegel’s images of the persecution of Jews also do correspond to the canon of German collective guilt. While Brandauer’s film highlights people sitting idly by and watching through their windows as Jews were forcibly relocated, Hirschbiegel shows the persecution of Jews as a means by which the Nazis disseminated fear. A young woman who had a relationship with a Jewish man is made to cower in the town square with a sign covered in obscene text.

The German newspaper Der Tagesspiegel has criticized the film for using history “as a backdrop for fingerpointing,” and declares that some episodes are not presented realistically. There is praise, however, for the scene in which a young secretary sent out into the hall during Elser’s torture reads a book, appearing to remain indifferent to what was taking place. Elser’s screams echoed through the hall. But does that unmoved face not also speak to a certain anxiety and fear? Later the young woman slips Elser a photo of his fiancée.

As in his heavily attacked film Downfall, about the last days of Hitler, Hirschbiegel refuses to show Nazis simply as demons or clowns in 13 Minutes. He shows the everyday routine of a dictatorship, which on the one hand was vicious and on the other hand increasingly ingratiating to the little guy. 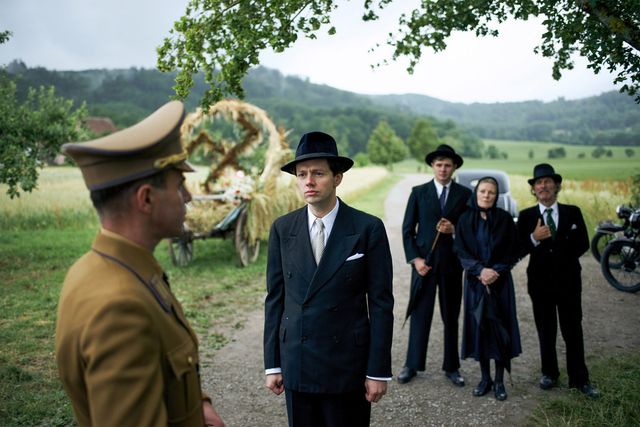 Every village was promised an asphalt road, electric light and a radio for every household. The cinema came to the provinces. It showed images of the productive power of German industry and, seeming to follow from that, an improvement in the living conditions of German workers. But every viewer could see that these were pictures of the arms industry. And, like Elser in the film, millions of workers at that time could soberly determine that it was worse for them under Hitler than it had been in the Weimar Republic.

In the film, Elser’s eyes are opened further by everyday life under fascism. One can say the film is one of the few examples of a work about the Third Reich in which workers are not assumed to be backward from the outset. It also raises the issue of Elser’s relationship to the German Communist Party (KPD), which has until now been ignored or played down. Prior to Hitler’s victory, Elser voted steadily for the KPD and was briefly a member of its Red Front Fighters League, without becoming a member of the party itself. The film shows him as a sympathiser who keeps his distance, not least because he saw no sense in the constant street fights between the Nazis and KPD members at the end of the 1920s.

In his film, Hirschbiegel depicts workers who became enemies of the Nazis early on but whose opposition is led into a blind alley by the politics of Stalinism. This expresses itself as well in the way Elser attempts to overcome this impasse through an act of individual terror. The film does not forgo taking a swipe at the “Heroes of July 20th.” In Dachau, Elser learns of the execution of one of Stauffenberg’s co-conspirators. It was his old interrogator Arthur Nebe, who is now long known to have been a not insignificant Nazi war criminal himself.