In the early morning hours of Monday, March 23, Lee Kuan Yew, the first prime minister of Singapore, which he governed from 1959 through 1990, died at the age of 91.

The sheer quantity of condolences from heads of states worldwide and obituaries published in major international newspapers was remarkable for a politician who headed a city state with a current population of just 5.5 million people. 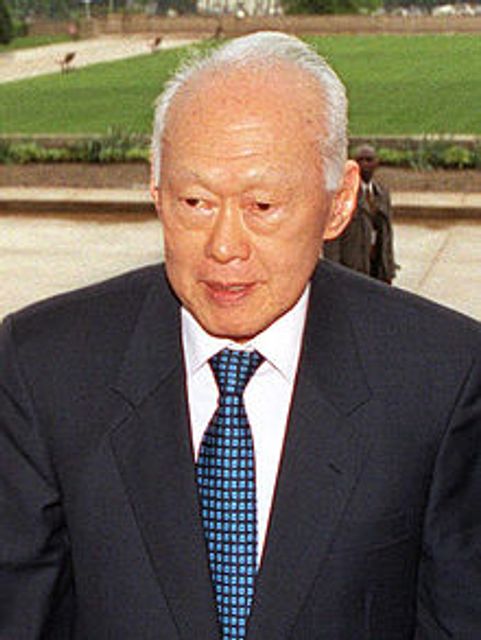 Lee was hailed as “a giant of history” (US President Barack Obama), a “great statesman” (Indonesian President Joko Widodo), a “lion among leaders” (Indian Prime Minister Narendra Modi), “one of the greatest leaders of modern times that Asia has ever produced” (Japanese Prime Minister Shinzo Abe), “a giant of our region” (Australian Prime Minister Tony Abbott), a “legendary figure in Asia” (United Nations Secretary-General Ban Ki Moon), and an “old friend of the Chinese people” (Chinese President Xi Jinping), to cite but a few. He has been praised for his wisdom, statesmanship, far-sightedness, bluntness and strong leadership, and celebrated as the founding father of Singapore, who was “instrumental in transforming the country from a colonial trading post to an independent, thriving city state” (Singapore Straits Times), with a gross domestic product per capita ranking third in the world.

Pictures of Singapore street life in the 1960s and 1970s have been contrasted with images of the current city to document the dramatic changes that have occurred.

What is missing in all these eulogies is any mention of the price the international working class has paid and is still paying for these changes, and for the gargantuan wealth that international capital has been able to accumulate through the network of industrial and financial operations penetrating the Asian region via headquarters and subsidiaries based in Singapore.

Singapore gained its independence in the period of national independence struggles that swept the world after World War II. A new generation of middle class intellectuals, who had grown up under the British colonial regime, enjoyed British-style education, and experienced the Japanese occupation of Singapore, went to study at universities in the United Kingdom after the war. It was there that a group of young ambitious men gathered, expressing the political interests of the Singaporean and Malayan bourgeoisie and their desire to shake off the yoke of colonial rule. Lee Kuan Yew, who was known as “Harry Lee” at that time, soon became the leader of this group.

This aspiring elite was faced with the growing influence of communist ideas among the working people of South East Asia, who were influenced by the Stalinist parties of either the Soviet Union or China, where the revolution of 1949 under the leadership of Mao Zedong had just swept away the bourgeois Kuomintang. There was also the pressure in neighbouring Indonesia of the world’s third largest Communist Party, with some three million members, and a Communist guerrilla army active on the Malayan peninsula.

Under these conditions, Harry Lee declared to the 1950 Malayan Forum in London: “The choice lies between a communist republic of Malaya and a Malaya within the British Commonwealth led by people who, despite their opposition to imperialism, still share certain ideals in common with the Commonwealth… if we do not give leadership, it will come from the other ranks of society.”

The working class on the Malayan peninsula had grown rapidly with the increasing demand for tin and rubber from the developing beverage companies and the automotive industry in America. There were significant strikes and protests by the working class in Singapore and Malaya in the immediate post-World War II period. These were contained by the Malayan Communist Party, allowing the British to return and resume control of their former colony.

It was clear to Lee that in order to gain the support of the masses, he would need to accommodate some of their desires for social justice and income redistribution. In his last years in England, he established strong connections to leaders of the Labour Party and officials within the British security complex, a network that helped him in later years to manage the handover of power from the British to the first new national administration.

Back in Singapore, he worked as a lawyer, defending trade unionists and left-wing politicians. Together with a group of friends who had studied with him in London, he formed the political cadre that would establish the new People’s Action Party (PAP) in 1954. Knowing that he needed the support of the Malay masses and the Chinese-speaking working class in Singapore, he maneuvered to integrate leaders of the underground Malayan Communist Party (MCP), who were operating undercover within the trade unions, under the banner of the PAP.

The Stalinist advisors to the MCP, from both Moscow and Beijing, promoted the “people’s united front” policy, subordinating the interests of the working class to the national bourgeoisie, a policy that had already led to the defeat of the Chinese Revolution in 1925-27 and the Spanish Revolution in 1936. The Stalinist parties in both Moscow and Beijing had long abandoned the aim of uniting the international working class in a common fight against imperialism. As Chin Peng, one of the leaders of the MCP later admitted, Beijing was more interested in creating trouble for the colonial powers in Malaya to keep them from intervening in China.

The Malayan Communist Party played the crucial political role in elevating Harry Lee, who now used his Chinese name Kuan Yew, to power. It was the principal force in subordinating the working class to the bourgeois leader and promoting illusions in him.

Lee Kuan Yew studied Mandarin and several Chinese dialects, as well as Bahasa Malay, in order to communicate directly with the workers in Singapore, who could not understand his English-language speeches.

He secretly worked with the British colonial administration, especially the security apparatus, when he needed to contain the influence of the Communist cadres within the PAP. Under the Internal Security Act, these political opponents could be detained at will, which helped Lee keep control of the PAP leadership.

Even after his election as the first prime minister of Singapore in 1959, Lee Kuan Yew preferred to let the British security forces continue their policing job for several years so that he could maintain his façade as a representative of the workers.

The Malayan leader, the Tunku Abdul Rahman, representing the interests of the Malayan bourgeois class, feared the strong political influence and competition of the Chinese bourgeois elite, concentrated in Singapore, and felt threatened by the political activity of the Communist forces, which were mainly comprised of Chinese working people. In August 1965, he refused to accept the formation of a Malayan Federation, with Singapore as a member.

On August 9, 1965, Lee Kuan Yew declared the independence of Singapore as a city state, knowing that with the loss of the “hinterland” on the Malayan peninsula, with its rich natural resources, Singapore’s future would heavily depend on foreign capital investment and the growing trade between Europe and Asia.

Consequently, his government aimed at establishing conditions that would attract capital investments from the Western imperialist countries. These included political conditions deemed stable and capable of withstanding opposition to capitalist exploitation, a working population politically disciplined and controlled by the National Trade Union Congress, the creation, with the support of the US and Israel, of the most modern army in South East Asia, and the development of an infrastructure that would support modern communication and transport channels, including a first class airline and port facility.

While the Suharto regime in neighbouring Indonesia slaughtered one million members or alleged members of the trade unions and Communist Party of Indonesia in 1965-1966, Lee Kuan Yew had no qualms meeting with General Suharto and establishing a long-lasting friendship.

Besides political oppression, Lee Kuan Yew used social policy incentives to contain the working class. These included a huge housing development project under which people could buy their own flats financed by their pension schemes, the provision of secure jobs in international companies with salaries higher than in neighbouring countries, and a good education system.

These conditions created the basis for the high economic growth rates Singapore generated over the ensuing decades. The Singapore “success story” is not a story of Lee Kuan Yew, nor of Singapore alone, but of the complex social, political and economic development of South East Asia after the Second World War. It is the story of a highly conscious national bourgeois elite exploiting the hunger of imperialist capital for profit opportunities in the vast Asian market, with the world’s largest concentration of people, and the story of the treacherous role of Stalinism.

The glorification of Lee Kuan Yew today is praise for the leader who opened the gate to the exploitation of the South East Asian working class and resorted to political oppression whenever workers tried to fight for their own interests. European and American heads of state are particularly enamoured of Singapore’s political system, in which dictatorial powers are wielded behind a formal democratic façade. Academic circles in leading Western universities and think tanks are promoting this model of “soft” dictatorship as an appropriate and more efficient alternative to the “lame dame of democracy,” as Herfried Münkler, professor of political science at Humboldt University in Berlin, characterised Western parliamentary systems in an article in mid-2010.

Lee Kuan Yew enjoyed the friendship of politicians who admired and envied his ability to act without political restraint in a dictatorial way, and have his actions whitewashed as examples of Confucian paternalism. These admirers included Ronald Reagan, Margaret Thatcher, Helmut Schmidt and Henry Kissinger. Deng Xiao Ping took inspiration from the Singapore model when he opened up the Chinese market to international capital by setting up special economic zones in the 1980s.

But the dynamics of imperialist expansion in Asia in recent decades have produced new conflicts. China has increased its economic power, threatening the hegemony of the US in Asia.

The US has responded with Obama’s “pivot to Asia,” which includes a relentless build-up of US naval forces at a special port facility in Singapore. The China-backed Asian Infrastructure Investment Bank (AIIB) is a direct challenge to US-controlled institutions such as the World Bank, with the European powers signing up to be founding members.

The working class of Singapore is feeling the pinch from these developments. The “quantitative easing” programs of the US Federal Reserve have flooded the international market with cheap money, and prices for property have increased tremendously in Singapore, putting an end to the vision of Singaporeans owning their own flats. Young families with an average income are no longer able to finance their own apartments, while education costs have also increased. The last general election in Singapore, held in 2011, dealt the PAP a heavy blow, with opposition parties winning nearly 40 percent of the popular vote.

The working class needs to reject the hype around the figure of Lee Kuan Yew and learn the lessons of its own history.