Nepal’s Emergency Operation Centre announced yesterday that at least 5,057 people have been killed and almost 10,000 injured from the massive earthquake that hit the poverty-stricken nation on Saturday.

Eight million people in 39 of Nepal’s 75 districts have been directly affected by the quake, and desperate survivors are becoming increasingly angry over the government’s slow rescue operations and lack of relief. 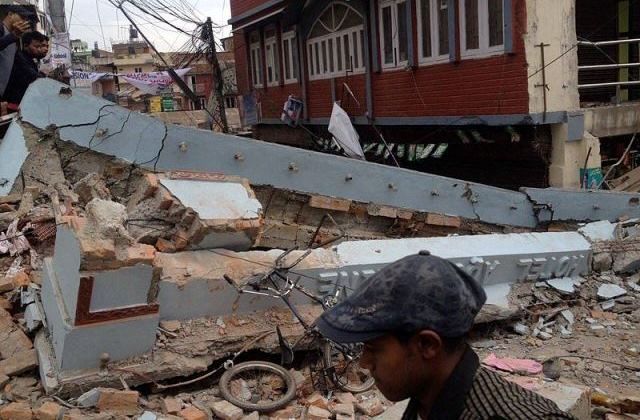 Some of the earthquake damage. Photo courtesy Krish Dulal

Casualties are still occurring. Yesterday, a landslide of mud, ice and snow hit the village of Ghodatabela, north of the capital Kathmandu. At least 250 more people are now missing.

The 7.8 Richter-scale quake struck Western Nepal and Kathmandu on April 25. The massive tremor extended into India, Tibet and Bangladesh, killing 72, 25 and 2 persons respectively in those countries. At least, 18 tourists and climbers were killed at Mount Everest. According to initial estimates, the cost of the disaster could be up to $10 billion.

Nepal Congress Party Prime Minister Sushil Koirala told Reuters yesterday that the death toll could reach 10,000. This would surpass the 8,500 who died in the earthquake that hit Nepal in 1934. Koirala said his government was “on war footing.”

Hundreds of thousands of survivors, however, still lack the most rudimentary facilities, such as food and drinking water, and are cramped in makeshift camps or sleeping in open spaces, fearing more tremors. On Sunday, UNICEF said nearly one million children urgently needed assistance.

Senior disaster management official Rameshwor Dangal admitted that the government still did not know the full extent of the devastation in hundreds of villages. He said the slow rescue operations and lack of food, drinking water, medicine and shelter would push the current death toll higher.

Grossly inadequate and under-staffed hospitals are overflowing with victims. Doctors are carrying out surgery and other medical procedures in rooms unsuitable for the job. One neurosurgeon told CNN: “I’ve seen a lot of situations around the world, and this is as bad as I’ve ever seen it. They need more resources, they need more personnel here right now.”

People living in rural districts confront the worst situation. Scores of villages are difficult to reach because of ongoing landslides and bad weather, leaving homeless survivors to attempt to rescue those trapped inside collapsed buildings with picks and shovels, and their own hands.

According to the New York Times, 90 percent of all the houses in the Gorkha district, near quake’s epicenter, were “flattened.”

Anil Giri, along with about 20 volunteers, was looking for two of his friends, presumed buried under the rubble. He told the newspaper that the government “has not done anything for us. We are clearing the debris ourselves with our bare hands.”

Tulachan, a building worker and shop owner, said: “I don’t think the government is doing anything … Only this tent has been provided by the government, but for everything else we have had to rely on our own neighbors. You can see how many humans are in need.”

Major earth tremors are frequent in Nepal. Several recent studies predicted that the Kathmandu area would be hit by a massive earthquake. The NBC network reported that 50 earthquake and social scientists met in Kathmandu just a week before the disaster to discuss how to prepare for such an eventuality.

“It was a nightmare waiting to happen,” University of Cambridge seismologist James Jackson said, adding: “Physically and geologically what happened is exactly what we thought would happen.”

These and numerous other scientific assessments, however, were completely ignored by Nepal’s government and the major powers that have the resources to prepare and quickly respond to earthquakes. In fact, no precautionary steps were taken to protect millions of Nepalese people.

More fundamentally, the so-called democratic governments, which came to power after the monarchy was overthrown in 2006, have done nothing for the working class and the poor. The poverty-stricken country ranks 145th in the list of 187 countries on the Human Development Index.

The Nepalese Maoists, who waged a decade-long guerrilla war against the monarchy, joined the bourgeois political establishment in 2007, promising to bring “democracy and prosperity” to the people. Instead, they implemented the social austerity measures demanded by the international bankers, driving up unemployment, poverty and social inequality throughout the country (see: “Nepal’s Maoists suffer landslide defeat”).

The US, China, India and other countries have pledged aid to Nepal. US Defence Secretary Ashton Carter held a joint press conference with US Secretary of State John Kerry and their Japanese counterparts in New York on Monday. Carter told the media that the US would send two C-17 Air Force transport planes with search and rescue teams to Nepal. Kerry announced that the US would increase its $1 million relief package to Nepal by just $9 million.

The main concern of the major powers, particularly the US, is to exploit the disaster to boost their political and military influence in Nepal. Strategically located between China and India, Nepal is a key element in Washington’s “pivot to Asia,” which aims to diplomatically isolate and militarily encircle China.

In line with these manoeuvres, US Ambassador to India Richard Verma showered praise on India’s Modi government over its response to the Nepal disaster.

“India has demonstrated its global leadership in recent weeks, first in Yemen and now in Nepal,” Verma declared. “We are grateful; we are impressed; we are inspired. And because our cooperation is expanding, India is using C-17s and C-130s on the front lines of its response. As our relationship progresses, we will be able to do even more together.”

These reactions are not driven by concerns about the unfolding tragedy in Nepal. They are another manifestation of increasing geopolitical tensions in the region that have been intensified by Washington’s confrontation with China.