Jean-Michel Basquiat at the Art Gallery of Ontario: Graffiti, fame and the art market

Jean-Michel Basquiat: Now’s the Time, at the Art Gallery of Ontario, Toronto, through May 10, 2015

Featuring one of the more problematic figures of the past several decades, the current exhibition at the Art Gallery of Ontario (AGO) in Toronto, Jean-Michel Basquiat: Now’s the Time, raises a number of questions about this artist and how he was and continues to be marketed—issues that are ultimately bound up with political and artistic difficulties of the period. 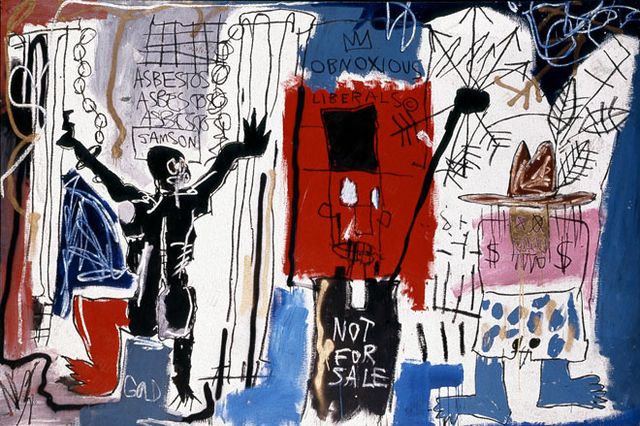 In the early 1980s, Basquiat became a cause célèbre on the international art scene. He first gained attention as a graffiti artist, distinguishing himself as a sort of sophisticated rebel, charming the New York art world, and famously developing an association with Andy Warhol, before dying of a drug overdose in 1988 at the age of only 27.

The story of his rise from street and graffiti artist to international art “star” virtually overnight, as well as his abrupt and tragic demise, caused a sensation that continues to generate considerable interest—and profit for some. In an increasingly parasitic economy, reflected in the stock market and real estate boom of the period, rapacious art speculators took a particular interest in Basquiat, who was well suited and, sadly, apparently willing to play the part of the latest darling of the art world elite. 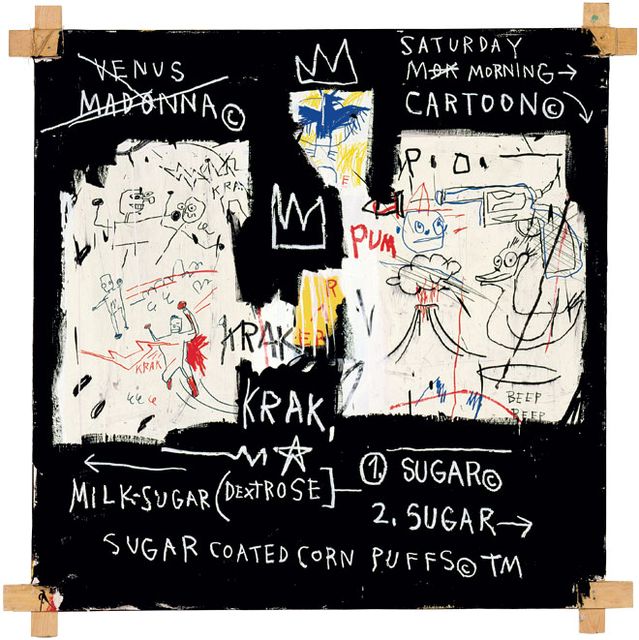 The exhibition at the AGO, one of its mostly highly promoted events of the year, presents Basquiat’s work as ground-breaking, even historic. In this reviewer’s opinion, this claim is no more based today on the actual merits of Basquiat’s artwork, intriguing as some of it may be, than it was when his career was launched some 35 years ago.

The 88 drawings, paintings and sculpture that have been assembled from collections around the world, for what is billed as the first exhibition of Basquiat’s work in Canada, do reveal a talent, creativity and a lively wit—but it must be said that on balance, these elements do not add up, in his case, to a lasting artistic contribution.

His style is described variously as “primitive,” “naïve” or “neo-expressionist,” denoting a return to emotive, colorful artistic works in contrast to the dry, conceptualist and minimalist work that immediately came before it. Unquestionably, there is a vivacity to Basquiat’s efforts, but there is good reason to doubt the depth of his overall approach.

A typical drawing such as “Trains, boats, cars” (1981) convincingly imitates the skill level of a toddler, and while amusingly ironic, its crudity places in question the artist’s attitude both to the work and to the viewer. If the artist does not take his own work seriously, why should we?

The AGO show’s curators have divided the exhibit into nine categories, from “Street as Studio” to “Music, Concepts and words,” which draw seemingly arbitrary divisions but nevertheless illustrate the breadth of subject matter the artist grappled with. Most of the works are drawings in various media, as simple in their composition as in their style, with some notable exceptions of greater complexity such as “La Hara” (1981). More ambitious works such as that one exhibit a solid sense of color and design, but there is only so much that can be explored within this limited form.

Basquiat was born into a relatively comfortable home in the Park Slope neighborhood of Brooklyn, New York, the second of four children. His father, Gerard Basquiat, was a successful accountant, originally from Haiti, and his mother, Matilde Basquiat, was a cultured woman of African-Puerto Rican descent. From early on, it was clear the boy possessed an exceptional intelligence, speaking and writing in three languages, English, French and Spanish, by the age of four.

As a child, he was introduced by his mother to art. She took him regularly to museums and galleries, and even enrolled him at the Brooklyn Museum at age six. At the age of eight, he was badly injured when he was hit by a car while playing in the street and was hospitalized for over a month and had to have his spleen removed. One of his closest companions became an edition of Gray’s Anatomy, the well-known anatomy textbook, which encouraged an early interest in figurative drawing. 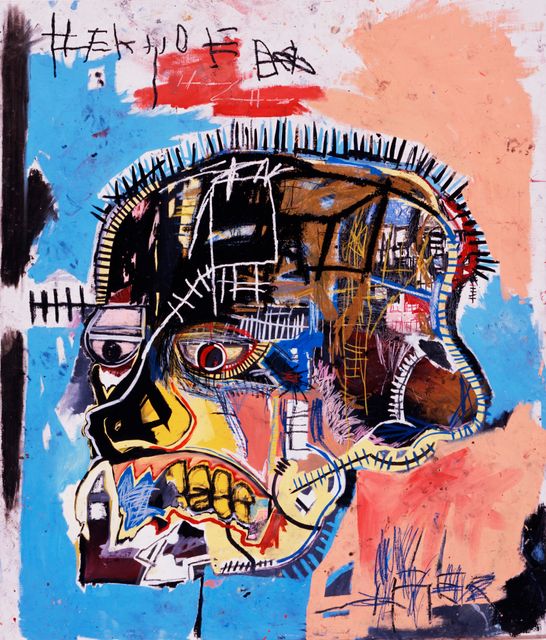 That same year, his parents separated, and his mother thereafter was in and out of treatment for mental illness. The children were subsequently raised by their father, but friction soon developed between the young Basquiat and his father over attempts at discipline that reportedly included regular beatings. When Jean-Michel was 13, his father moved the family to Puerto Rico for a job, but within two years they were back in Brooklyn and familial tensions grew.

At the age of 15, Basquiat briefly attended Edward R. Murrow High School, a progressive institution, before transferring to the City-as-School in Manhattan, an alternative high school designed for gifted and talented children and based on John Dewey’s pedagogical theories. Despite this encouraging environment and largely due to his troubles at home, Basquiat quit school before graduating, left home, and stayed with friends for a time before moving in with his girlfriend, Alexis Adler.

The young artist maintained an interest in drawing and in cartoons in particular throughout his youth and, although he came to greatly admire graffiti artists like Keith Haring with whom he developed a life-long friendship, he did not see himself as part of the burgeoning graffiti culture in New York City in the late 1970s.

Basquiat and his partner Al Diaz gained notoriety around this time for their ubiquitous graffiti under the tag SAMO that, among other things, stood for “same old shit.” In Haring’s words, Basquiat “wield[ed] his brush as a weapon,” distinguishing himself from other graffiti artists for his street poetry and sharp social commentary. 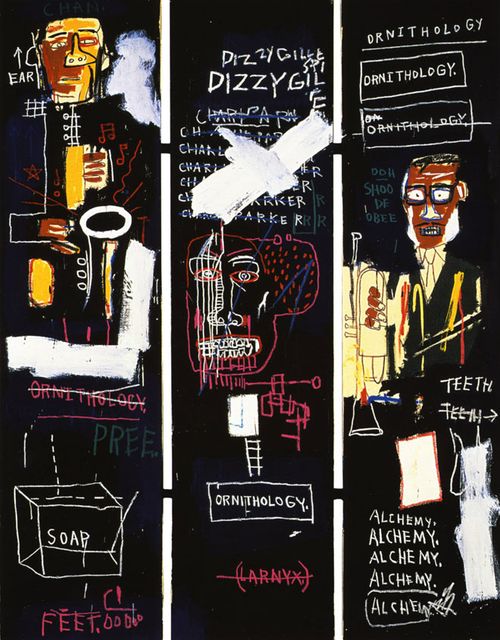 As he often made clear, apparently both publicly and privately, Basquiat wanted to be famous and was convinced he would be. The limited scope of his artwork, one might suggest, is bound up with that very ambition. His fascination with stardom and with artists who had gained great fame and died young had a disturbing quality. “Since I was seventeen, I thought I might be a star. I’d think about all my heroes, Charlie Parker, Jimi Hendrix.... I had a romantic feeling of how people had become famous.”

Due to a combination of his energy, his abilities at self-promotion, his talent and his ethnicity, Basquiat became an especially marketable commodity. What he thought of the affirmative action and the “black capitalism” policies that had come to the fore in the aftermath of the inner city riots is only vaguely indicated by some of his work, in paintings with titles like “Irony of Negro Policeman” (1981) and “Obnoxious Liberals” (1982).

To his credit, Basquiat opposed the effort to portray him and his art primarily in racial terms, notably declaring, “I am not a black artist, I am an artist.” While such statements reveal a degree of social insight, his general attitudes are by no means clear.

The contradictions in Basquiat’s character and work have to be seen against the backdrop of the unfavorable conditions in the New York art scene in the 1980s. The radical wave of the 1960s and early 1970s had receded, and considerable sections of the middle class were turning to the right, toward hedonism and self-absorption. Superficiality and triviality were more and more the order of the day. And great heaps of money were to be made in the art market, as investment firms began to take a serious interest. One hundred art galleries opened in New York in the years 1983 to 1985. Gallery sales in art in 1984 alone exceeded $1 billion, and prices continued to climb.

Basquiat’s association with Andy Warhol was essentially opportunistic on both sides. Warhol seems to have seen Basquiat as an opportunity to recharge his career, and Basquiat saw in the older artist and celebrity his ticket to fame. Warhol welcomed the suggestion by Swiss art dealer Bruno Bischofberge that the two consider collaborating, which they did and quite lucratively. As one writer put it, “While Basquiat explicitly critiqued capitalism, Warhol embodied the artist as businessman.” Altogether this body of work comprises fully 10 percent of Basquiat’s output and represents some of his more interesting paintings.

Despite the verdict by art investors in his favor, the relative merit of his artwork continues to be a matter of debate among critics and the public both. Unquestionably, he had an extraordinary imagination and creative energy, and his works reference a large range of influences and sources. For an artist identified with a return to representation, however, it is not incidental that he felt compelled to publicly offer the assurance that he actually could draw.

Many of his images are distinguished by their classical and esoteric references, as though he wanted everyone to know he was well educated, but, by presenting them in the form of infantile doodlings, he seems at the same time to be cancelling his sophistication, such as it was, or treating it as trivial and ultimately worthless.

The late art critic Robert Hughes was relatively scathing about Basquiat, or more precisely, about the art world that elevated the artist to prominence. Speaking of Basquiat’s paintings, he wrote, “The key was not that they were ‘primitive,’ but that they were so arty. Stylistically, they were pastiches of older artists he admired: Cy Twombly, Jean Dubuffet. Having no art training, he never tried to deal with the real world through drawing; he could only scribble and jot, rehearsing his own stereotypes, his pictorial nouns for ‘face’ or ‘body’ over and over again.

“Consequently, though Basquiat’s images look quite vivid and sharp at first sight, and though from time to time he could bring off an intriguing passage of spiky marks or a brisk clash of blaring color, the work quickly settles into the visual monotony of arid overstyling. Its relentless fortissimo is wearisome. Critics made much of Basquiat’s use of sources: vagrant code-symbols, quotes from Leonardo or Gray’s Anatomy, African bushman art or Egyptian murals. But these were so scattered, so lacking in plastic force or conceptual interest, that they seem mere browsing—homeless representation. The claims made for Basquiat were absurd and already seem like period pieces.”

These comments, on the whole, seem legitimate. There is an ironic attitude and a lack of seriousness in Basquiat’s work. On balance, one can’t help but infer a certain cynicism, a hopelessness about any general improvement in the situation. His overweening pursuit of self-glorification seems linked to that view.

However genuine his opposition to the existing set-up may have been at one point, his outlook never developed beyond a youthful anarchism. Basquiat’s art was limited not only by what he wanted to achieve but also perhaps by what could be achieved at such a time and in such a milieu. Ultimately, he was consumed by the system he reviled, yet wanted so desperately to succeed in.