Over 580 poor families evicted in 2013 from Slave Island in central Colombo to make way for a multi-million dollar property development now confront a hopeless situation. After being promised rental money until they were provided with new residences, the shanty dwellers are not receiving adequate payments. Nor will they be provided with new homes.

The former government of President Mahinda Rajapakse evicted the families in 2013 and cleared 2.4 hectares of land as part of its plans to convert Colombo City into a South Asian commercial hub for international investors and tourists. The project involved Tata, the giant Indian corporation, which planned to build luxury condominiums with an estimated value of $US429.5 million.

Under its agreement with the Rajapakse government and the Urban Development Authority (UDA), Tata promised to provide 650 permanent homes for the displaced inner-city families in a four apartment towers. The company also agreed to pay 15,000 rupees ($112) per month for each displaced family to rent a house of 400 square feet for a period of 30 months.

Most of the families received about 15,000 rupees per month for 15 months, but the payments have stopped. A senior UDA official recently told the Business Times that Tata’s money was only sufficient for less than 15 months and the UDA had no funds to pay the evicted families. Moreover, no work has started on the promised apartment towers. 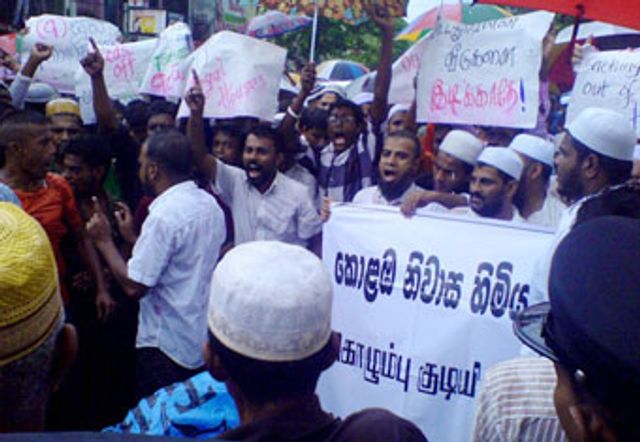 The current minority government of President Maithripala Sirisena has suspended the project until it reviews the original agreement between the Rajapakse administration and Tata, claiming that there was financial mishandling by corrupt officials.

On March 9, Finance Minister Ravi Karunanayake told the South China Morning Post that the government was “examining a housing project by Indian conglomerate Tata. Tata came in and said they will put in $250 million, but they put in $20 million, use our land, and sell it back to us for a higher price.”

Tata has rejected these allegations and warned that “arbitrary actions” will adversely impact on future international investments in Sri Lanka.

Under the Rajapakse government’s plans, the UDA and the Land Reclamation and Development Board were taken over by the defence ministry, controlled by its secretary Gotabhaya Rajapakse, one of the president’s brothers. The defence ministry bogusly declared: “The primary goal of the project is to uplift the living standards of the people in the area and providing them a better living environment.”

The Rajapakse government aimed to remove more than 135,000 poor families from Colombo City. Thousands of families have been evicted from Slave Island, Dematagoda, Appalwatta and Ibbawatta during the past six years. The defence ministry mobilised the security forces to intimidate anyone opposing the evictions.

Most of those evicted have not been provided with permanent homes. Some have been forced to accept wooden huts without water and sanitation in the Nagalagam Street camp at Totalanga and in Weligodawatta. Several hundred families were provided with tiny flats of 400 square feet, for which they were forced to pay 100,000 rupees and then 3,900 rupees per month.

Several people who were driven out of Slave Island recently spoke to the WSWS about the conditions they now confront.

Irfan, a three-wheel taxi driver said: “The former government must take the entire responsibility for our current predicament. In the public consultation meeting held before we were evicted, the former Defense Secretary Gotabhaya Rajapakse threatened us and so most of us were compelled to agree with the plan.

“I now live in Makola, a 23-kilometre drive from here. To do my job I have to be here by 8 or 9 a.m. and work till midnight. Since we don’t have an address here, I can’t put my child into a school in Colombo. We don’t want to put him into a school in Makola either because we are waiting to return to Colombo as soon as possible.”

Another three-wheel taxi driver said: “For now we have no other option but going behind [President] Maithripala’s new government. Let’s see until his 100-day program ends. If nothing comes out of it, we’ll all go and re-occupy the land.”

Another resident explained: “We know all about the problems in the multi-storey homes built for Wanathamulla and Dematagoda residents. Generally there are six to seven people in our homes. How can we even keep a coffin in a tiny house like that? There’s no space to keep household animals, like hens and goats, which provided essential food supplements to our households. We can’t afford to buy eggs and fresh milk.”

President Sirisena was a cabinet minister in the Rajapakse government and fully supported the evictions. The original plan to remove city dwellers was prepared during the 1980s by the then United National Party government. While posturing as opponents of the Rajapakse government and its brutal urban development measures, the UNP diverted the attempts of the inner-city poor to stop the evictions into various legal appeals.

When Slave Island families refused to vacate their homes, UNP parliamentarian and lawyer Sujeewa Senasinghe persuaded them to file a petition in the Supreme Court. In September 2013, the then Chief Justice Mohan Peiris declared: “[N]o one should obstruct ongoing development programs in Colombo.” Senasinghe and the UNP told the residents to submit to the court decision.

No evicted worker or poor family should expect any favourable outcome to their plight from the current government. Sirisena’s promised 100-day reform program has ended without any improvement in the conditions of life for workers and the poor.

The UNP exploited the popular hostility to Rajapakse, including among those evicted from their homes, hypocritically promoting Sirisena during the presidential election. After taking office, Sirisena appointed a committee of ministers to investigate the plight of the evicted families. This is nothing more than a cynical attempt by Sirisena and his UNP-led government to buy time before the approaching general election.

Like the former Rajapakse government, the Sirisena-UNP regime is increasingly concerned by falling foreign investment as the economic crisis deepens internationally. Whoever comes to power in the next election, they will continue to ruthlessly impose the pro-investor policies and economic measures demanded by the International Monetary Fund and the World Bank.

Sri Lanka: Residents protest against demolition of homes
[15 May 2010]