On Monday, Sweden’s Supreme Court rejected an appeal by WikiLeaks founder Julian Assange against his arrest warrant by a 4-1 majority.

Assange was arrested in London in December 2012 following the issuing of a highly dubious European Arrest Warrant by the Swedish authorities. He is wanted in Sweden for questioning regarding bogus allegations of sexual assault. 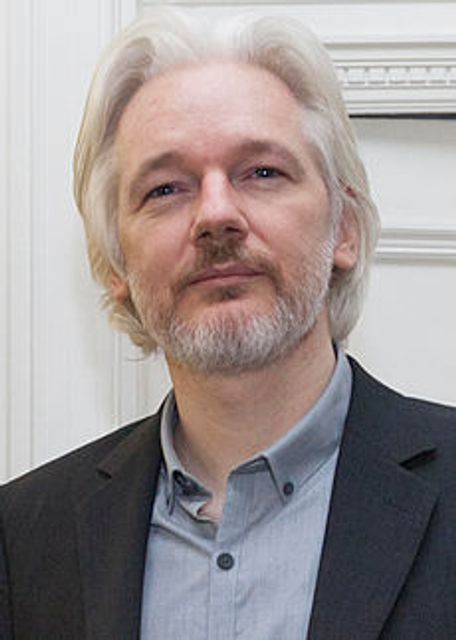 Julian Assange at the Ecuadorian Embassy, London in August 2014

Assange, who has not been charged with a single crime relating to his time in Sweden during 2010, denies the claims of assault.

Denied his basic democratic rights by the British courts, in June 2012 he was forced to take up asylum in the Ecuadorean embassy in London. For almost three years, he has been effectively under house arrest, as he is not able to take up the full-intended benefit of the grant of asylum offered to him, under international law, by Ecuador’s government in August 2012. London Metropolitan police officers surround the embassy around the clock, in an operation that has already cost more than £10 million. Assange is faced with immediate arrest if he steps outside.

His legal team argued before the Swedish courts that his confinement in Ecuador’s embassy is enforced, places severe restrictions on his freedoms and is disproportionate to the scale of the allegations of which he is accused. The case came to the Supreme Court after the lower courts in Sweden objected and ruled that Assange’s confinement was self-imposed.

The ruling was yet another blatant example of Assange’s democratic rights being trampled upon. It stated, “The public interest in the investigation continues to weigh heavily. In view hereof, and the risk that Julian Assange may evade prosecution if the arrest warrant is lifted, continued detention is currently regarded as compatible with the principle of proportionality.”

The Supreme Court said it saw “no reason to lift the arrest warrant,” since moves to question Assange in London were already in place.

Only Justice Svante Johansson dissented and in an addendum to the ruling stated that the arrest warrant was “in violation of the principle of proportionality” and the reasons for continued detention did not “outweigh the intrusion and inconvenience” it caused Assange.

Democratic norms have been overridden at every stage, in Britain and Sweden—such has been the fervour in ruling circles to “Get Assange” and silence WikiLeaks. The Supreme Court made its ruling before Assange’s legal team had even made its final submission. Assange’s lawyer, Per Samuelson, said, “We are of course disappointed and critical of the Supreme Court’s way of handling the case. This decision has been taken without letting us close our argument.”

Consistent with the tearing up of the rulebook that has characterised the nefarious efforts to frame Assange, the Supreme Court did not include a legal explanation for this conclusion.

The ruling follows the moves made by the Swedish prosecutors in March, when, after years of refusal, they formally offered to travel to London to question Assange regarding the allegations.

This came after Sweden’s Court of Appeal rebuked prosecutor Marianne Ny in November 2014 for breaching her duty to progress the preliminary investigation. The prosecution’s decision was also prompted by the fact that some of the allegations against Assange, which date back nearly five years to August 2010, will expire under the statute of limitation in August—although the alleged rape offence runs until 2020. At the time, Ny said that “time is of the essence.”

Assange’s legal team welcomed the move at the time, but the fact that the prosecuting authorities stated their willingness to question Assange in London is now being used in the Supreme Court ruling as a reason why the arrest warrant must be upheld! The ruling states, “The supreme court notes that investigators have begun efforts to question Julian Assange in London. The supreme court finds no reason to lift the arrest warrant.”

Julian Assange is in grave danger of being railroaded to Sweden, where he would not only be facing allegations of sexual assault. Due to WikiLeaks exposing the crimes of US imperialism and other major powers, the US authorities have made clear that Assange remains a target.

In April 2010, WikiLeaks made public the “Collateral Murder” videotape, documenting a 2007 massacre in Baghdad carried out by an attack helicopter in which 15 Iraqis, including two Reuters journalists, were killed. This was followed in July the same year by the release of 391,000 Afghanistan battlefield reports, documenting killings of civilians that had been covered up by the Pentagon, including the mowing down of unarmed demonstrators and assassinations by Special Forces death squads. In October, WikiLeaks made available 400,000 battlefield reports from Iraq, documenting more carnage against civilians and the complicity of the US military in horrific forms of torture against Iraqi detainees.

This exposed to the international public evidence of war crimes carried out by both the Bush and Obama administrations.

WikiLeaks was in the process of releasing thousands of secret diplomatic cables exposing crimes and conspiracies carried out by US officials around the world when Assange was arrested.

The importance of WikiLeaks making the cables public can be seen by the fact that some of the revealed NATO plans for a US-led war see the immediate deployment of nine divisions of US, British, German and Polish troops in the event of any Russian incursion into the former Soviet Baltic republics.

On March 4 of this year, US District Court judge Barbara Rothstein rejected an application by the Electronic Privacy Information Centre for the release of documents under Freedom of Information laws. Such disclosure would prejudice a “multi-subject investigation” into WikiLeaks that is “still active and ongoing,” she ruled. It could also “expose the scope and methods of the investigation, and tip off subjects and other persons of investigative interest.”

Assange’s lawyers are deciding on their next step and may take their case to the European Court of Human Rights. Assange’s case is currently being considered by the United Nations Working Group on Arbitrary Detention, where a decision is expected soon.

In their 42-page submission to the body, Assange’s legal team notes, “For nearly four years, Mr. Assange has been deprived of a number of his fundamental liberties. For the last 816 days, he has been confined to the Embassy of Ecuador in London, in an area of 30m2, he has no access to fresh air or sunlight, his communications are restricted and often interfered with, he does not have access to adequate medical facilities, he is subjected to a continuous and pervasive form of round the clock surveillance, and he resides in a constant state of legal and procedural insecurity. Mr. Assange has not been charged.”

The document also notes, “The failure to acknowledge in Mr. Assange’s case, that UK law and procedure has now been altered so that he would no longer, if facing arrest today, be liable to extradition under the European Arrest Warrant (and yet no benefit from that change in the law has been facilitated to him).”

Four years since the arrest of Julian Assange
[12 December 2014]