More than 100 tea plantation workers and their families who survived a massive landslide that hit the Meeriyabedda Estate in Sri Lanka’s central hills district last year are still living in makeshift accommodation. Immediately following the disaster they were housed in a school at the Poonagala Estate, about 12 kilometres from Bandarawela. A number of these families are now in an abandoned tea factory at the Mahakanda Estate.

Initial official reports claimed that about 200 people were killed in the October 29 landslide. This figure was later revised down to 37. It was the biggest natural disaster since 2004 tsunami, devastating a one-kilometre area and destroying housing for 150 families. 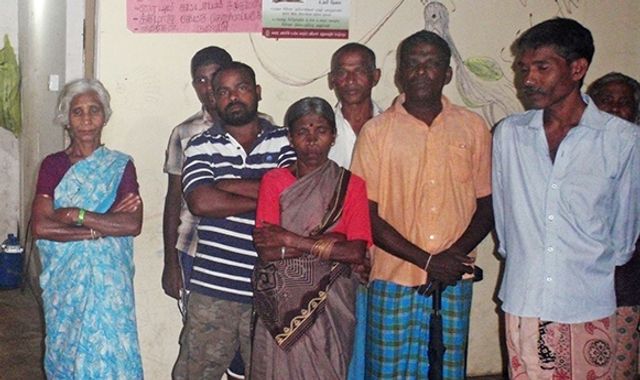 While the immediate cause of the landslide was heavy rainfall, the area had been identified for more than a decade as landslide prone. The National Building Research Organisation (NBRO) recommended in 2005 that 75 families leave the area and that alternative accommodation be found for them. The Maskeliya Plantation Company, which is managed by Richard Peiris group, took no action, nor was it directed to do so by the government.

Over 80 percent of estate workers, one of the most oppressed layers of Sri Lankan working class, live in line-rooms, long buildings divided into small living quarters that are provided by the plantation companies. Many of these buildings were built by British planters during colonial rule which ended in 1948. Line rooms have only a single room and kitchen with a small verandah. The rooms have one entrance and so there is no proper ventilation and some are like dark caves.

Last weekend, WSWS reporters visited some of the landslide survivors at makeshift accommodation currently housing 91 families. The Maskeliya Plantation Company owns both the Meeriyabedda and Mahakanda estates and so the displaced workers have now been employed at Mahakanda.

Landslide survivors angrily explained that a few days after the disaster they were visited by then President Mahinda Rajapakse who promised to provide them with permanent housing within three months. The state-owned ITN television channel reported that 300 million rupees ($US22,340) had been allocated to build houses and that the army had converted the abandoned tea factory into a temporary “attractive housing complex.”

Digambaram claimed on February 18 that construction of 500 houses would begin on March 1 as part of Sirisena’s 100-day reform program. The so-called 100-day program ended on April 23 but little has been done.

Seven months after the disaster, the landslide survivors remain in overcrowded and unhealthy accommodation.

Each family has a tiny room separated by hardboards—a space smaller than the old line rooms. Women sleep in these rooms at night while the men use the common hall. Despite cold temperatures in the central hills, adults and children have to sleep on concrete floors. 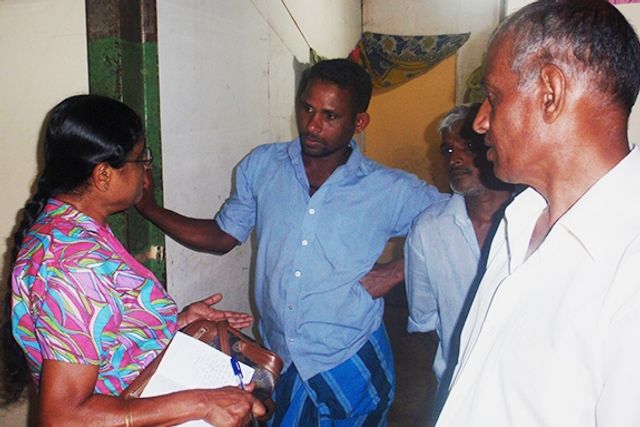 Rajareeder, a middle-aged worker, said: “Immediately after the disaster, the government promised to provide us houses. [Arumugam] Thondaman [leader of the Ceylon Workers Congress, the main plantation trade union] also came and made promises but nothing happened. A new government has come to power but we continue to suffer. Our children are disease prone and we don’t know what will happen to them.”

When the estate workers lived in Meeriyabedda, their daily wage was just 450 rupees ($US3.37) and they faced long periods without work. “If we aren’t able to get extra work outside the estate we can’t buy enough to eat,” Rajareeder said. “At Mahakanda there is less outside work and we are finding it hard to survive. We receive 600 rupees per day but it’s really difficult if we don’t get any work for two to three days.”

Fifty-nine landslide families were recently each awarded a seven-perch piece of land (about 170 square metres). The title deed declared that the land would “free estate workers from their difficult line-room life and give them real ownership of a house with a land right.” This claim, lifted from Sirisena’s presidential election manifesto, is in order to free the estate companies from providing accommodation and imposing this burden on the poverty-stricken plantation workers.

The displaced families awarded land were among a thousand given “title deeds” on April 25 by Prime Minister Ranil Wickremesinghe at a ceremony at the Bandarawela Town Hall. One worker said that some displaced women not given title deeds attempted to set fire to themselves in protest during a recent visit to the area by A. H. M. Fowzie, a government minister.

Another worker said: “Land in Makultenna nearby Poonagala has been reserved for us but the area has not been individually separated and there are signboards on the property saying “No Entrance.” So far only four houses have been built for the displaced families but there is only one corridor for two houses. The corridor is about 1.5 feet wide, which means that two people cannot pass at the same time. Nobody knows whether any other houses will be built and to whom they will be given.”

A.V. Gunasekaran described the difficulties he faced before the landslide: “There were not enough houses and so three families were living in one line-room. Fifteen years ago, 66 families were given land where last year’s landslide occurred. They stayed there because they didn’t have enough money to move anywhere else. They perished in the landslide. Some of those previously given land built small homes after obtaining a loan from the company to be paid in 2,100-rupee monthly installments. If you were unable to pay an installment, management threatened to take to you to the police.

“We lost everything in the landslide but nobody wants to solve our problems. It’s very difficult to trying to live in these overcrowded rooms. The toilets are overflowing and are not cleared, and the children now have skin diseases.”

Facing homelessness, low wages and intense exploitation, the estate workers are deeply hostile to the union leadership who have systematically betrayed their members demands for decent wages and other basic rights.

As one estate worker said: “The union leaders claim it’s a victory because we’ve been given land to build homes but what we want is a decent house. The employers want to wash their hands of us and not provide any housing. At the same time, employers say that we have to work harder in order to safeguard the industry. The union leaders agree with all these things.”