Almost three years after the event, a coroner’s court has finally commenced hearings into an apartment fire that killed Connie Zhang, 21, and seriously injured Ginger Jiang, 27, on September 6, 2012 in the southwest Sydney suburb of Bankstown. 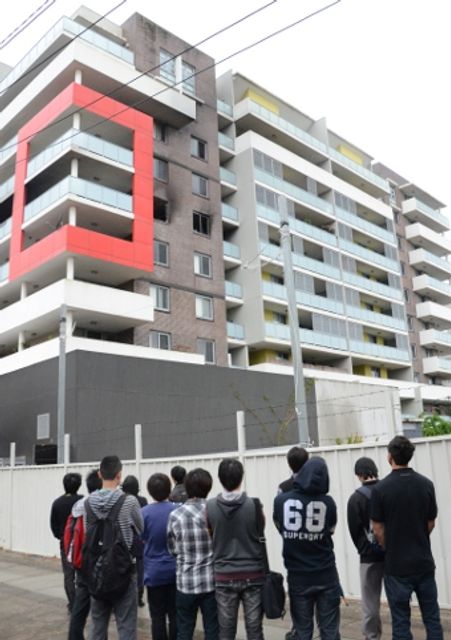 Friends of Connie Zhang looking up at the burnt-out apartment

The Chinese students attempted to escape an intense blaze that began on the apartment balcony and rapidly engulfed the fifth-floor apartment. The young women were forced to jump from a 15-metre high window ledge minutes before members of Fire and Rescue New South Wales (FRNSW) reached the building.

According to initial reports, the fire reached temperatures of 1,000 degrees centigrade. Scores of people, trapped by the dense smoke and flames, had to be rescued by fire crews. Residents were rendered homeless for two months, forced to find their own accommodation and bear the financial cost of restoring their lives.

The long-delayed inquest heard testimony between June 15 and 23, and will resume on August 10. Its findings are not expected to be released until late this year. Evidence presented so far vindicates the initial analysis made by the Socialist Equality Party (SEP) in September 2012.

As the SEP explained, the roots of the Bankstown tragedy lay in the profit drive of the banks, construction industries and real estate developers—all seeking benefit from the acute shortage of affordable housing for students and working class families—and the rundown of fire and building safety standards by federal and state governments.

Stephen Rushton, counsel assisting the coroner, told the first day of the hearing that the Euro Terraces building “never complied with the relevant safety standards, either at the completion of construction, at the time of the fire and doesn’t comply now.”

Rushton said that if the complex had been fitted with a sprinkler system the fire would not have taken hold. Under the Building Code of Australia, buildings less than 25 metres high are not required to have sprinklers. Euro Terraces is 24.9 metres high. It is one of many new apartment blocks designed to circumvent the sprinkler system rules. Rushton said fire fighters were also hampered by inadequate water hydrant pressure.

The inquest was told that the FRNSW, the Bankstown City Council and a fire safety agency had previously told the Euro Terraces strata management that the building had scores of safety faults and unauthorised modifications, including additional bedrooms and a central atrium roof.

The apartment where the fire began had an unauthorised fourth bedroom. It was one of 12 flats in the block with such additional rooms.

Rushton said the blaze started on the balcony, probably in a plastic bucket that contained a metal paint tin with a flammable oil-like substance. He said Jianwei “Jason” Zeng, who lived in the apartment, had been smoking on the balcony before the fire.

The inquest was told that Zeng unsuccessfully tried to extinguish the blaze and then fled the apartment, leaving its main door propped open with a dumb-bell weight. Fanned by high westerly winds, the fire quickly spread through the flat.

Rushton briefly referred to Zeng’s statement to the police but failed to mention that two days after the fire, the young man was incarcerated in an immigration detention centre and five weeks later deported to China because his student visa had expired. The hearing was not told whether attempts were made for Zeng—one of only two surviving witnesses from the fire—to provide testimony via video link from China.

Ginger Jiang, who spent months in hospital recovering from two broken hips, two shattered ankles and various skin grafts, attended the inquest in a wheelchair. She repeatedly broke down as she explained the horrifying situation that faced the two young women.

Jiang said she was working on a student assignment when the electricity suddenly failed. She heard an explosion and then saw sparks and flames in the air conditioning unit on the balcony and heavy black smoke. Unable to reach the only exit door from the apartment, she and Zhang sought shelter in an adjoining bedroom.

“We knew we could not get out,” she said. “Then we threw ourselves towards the window. I saw Connie climb over the window. There was only half of the window area left for me … I breathed in smoke. I could not breathe any more. I thought, if I don’t jump, I will die here. Then I just jumped.”

Property investor James Peng, who owned the fifth-floor apartment and another flat in Euro Terraces, told the hearing he purchased the apartments “off the plan” in 2007. In April 2009, a few days before the final settlement, he hired a contractor to build an additional bedroom in each apartment.

Peng admitted that he did not inform the Bankstown Council, the body corporate or any other authority about the extra bedrooms, but claimed he did not know it was illegal. “I knew other people are doing that [renovations] as well,” he said.

Peng said he was advised to make the changes by the Property Investor Alliance (PIA), a real estate company that showed him similar modifications at the nearby Auburn Central apartment complex.

All the bedrooms in Peng’s two Euro Terraces apartments had lockable doors so they could be sub-let. “I had an investment in my mind at the time,” he said. “I was hoping rent values would be good.” Peng appointed PIA to collect the rent, which managed over 900 rental properties at the time of the Bankstown fire.

Euro Terraces strata manager Peter Poulos, from Home World Realty, conceded that Bankstown council and the FRNSW ordered safety changes before the blaze. Poulos testified that he mentioned these requests in owners’ corporation meetings but did not table the documents.

Poulos admitted that the FRNSW ordered a fire hydrant flow test but when the apartment block failed this rudimentary safety procedure, he did not inform FRNSW.

Rushton referred to a letter from Bankstown Council complaining about numerous false fire alarms in the building before the fire. An October 20, 2010 report was tabled during the inquest that listed significant safety defects and called for additional fire sprinklers in the building. Poulos claimed he had no knowledge of the report, or who ordered it, and said no one on the strata executive knew about it.

The testimony provided a glimpse of the indifference toward basic fire safety throughout an industry that ruthlessly exploits students, immigrant families and other working class people. These individuals who testified are only small players in the web of economic factors that contributed to the Bankstown tragedy.

Countless unanswered questions remain about the disaster. Representatives from FRNSW, Bankstown Council and Silky Constructions, which built Euro Terraces, are yet to testify.

While future hearings will no doubt provide more details about the blaze, the inquest will not expose, or hold accountable, the banks, property developers and construction companies and the governments responsible for the run-down of basic safety standards.

Almost three years on, nothing has fundamentally changed for Euro Terraces residents—the building still has no sprinkler system and false fire alarms continue to plague it. Moreover, violations of basic fire safety, dangerous constructions and overcrowded and illegal accommodation throughout Sydney and across Australia are worse than when the Bankstown blaze erupted.

The Fire Protection Association Australia, whose members include fire fighters, insurers and building owners, last year reported that up to 40 percent of buildings in NSW did not meet basic fire safety standards. Over 500 buildings in inner-city Sydney breached existing rules.

The association also said that increasing numbers of “non-compliant” fire protection systems were being approved. It warned that most people involved in designing fire protection measures had no formal qualifications and that installers were allowed to “self-certify” their work.

Last November, a 23-storey apartment block in Melbourne’s Docklands precinct caught fire, after a blaze on a balcony ignited inflammable external cladding. No one was killed, but it took over 120 fire fighters to evacuate 400 residents and bring the fire under control. The installation of the cladding, which is illegal under Australian building regulations, was a cost-cutting measure.

With property prices soaring, apartment over-crowding and other profit gouging is worsening. Sydney City Council recently discovered a three-bedroom home in the inner suburb of Ultimo crammed with 58 beds. Properties with up to 10 people living in one room and tenants sleeping in bathrooms and pantries are not uncommon.

Last year an illegal backpacker hostel at an Alexandria industrial site in south Sydney was only discovered when a fire engulfed a neighbouring property. Fifteen Japanese and Korean nationals escaped injury as the blaze erupted in the early hours of the morning. Residents were paying up to $130 a week to live in rundown caravans, a shipping container and a minibus.