Last weekend, the Iowa state Democratic Party joined those of Connecticut, Georgia and Missouri in dropping the name “Jefferson-Jackson Day” from annual fundraising dinners. Five other states are expected to quickly follow suit. It is anticipated that the name will soon be junked entirely.

The move to disassociate the Democratic Party from the two figures it has long claimed as its founders, Thomas Jefferson and Andrew Jackson, allegedly because they were slave-owners, marks a new milestone in the party’s embrace of identity politics, a fact acknowledged by both Democrats and media analysts. It is indicative, in the words of the New York Times, of “one of the most consequential trends of American politics: Democrats’ shift from a union-powered party organized primarily around economic solidarity to one shaped by racial and sexual identity.”

The annual Jefferson-Jackson Day gatherings became prominent in the 1940s and 1950s, when they were viewed as the Democratic Party’s answer to the Republican Party’s “Lincoln Day” (which has in recent years been renamed “Reagan Day” in many states). The dinners provided a major source of revenue for state, county and local party organizations. At the national level, they were used by Democrats such as Harry Truman and Adlai Stevenson to outline policy objectives designed to appeal to the “common man” and secure the party’s presidential nomination. 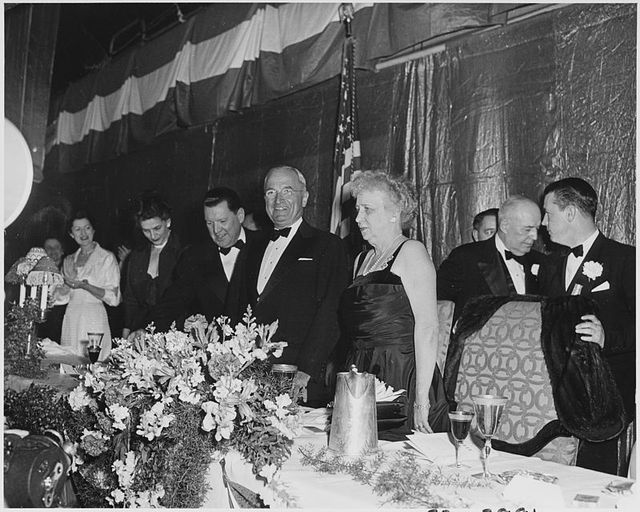 Jefferson is the central target. He is singled out in the Times article by former Virginia Governor L. Douglas Wilder, the grandson of slaves, as a “hypocrite.” The author of the Declaration of Independence and the third US president (1801-1809) has been vilified in recent years by a growing chorus of historians attached to the Democratic Party. Basing themselves on the fact that the British crown freed some slaves for tactical purposes in the American Revolution, historians such as Simon Schama, Paul Finkelman and Gerald Horne have argued that the rebellion against the British monarch was, in fact, a “counterrevolution.”

Some historical perspective is in order. Jefferson was indeed a slave-owner. So was Jackson, the seventh US president (1829-1837.) There the similarities end. It was always false for the Democratic Party to tie Jefferson’s name to that of Jackson, claiming them both as founders of the Democratic Party, which in fact did not exist in Jefferson’s time. And it is false now to conflate them as equally culpable for slavery. 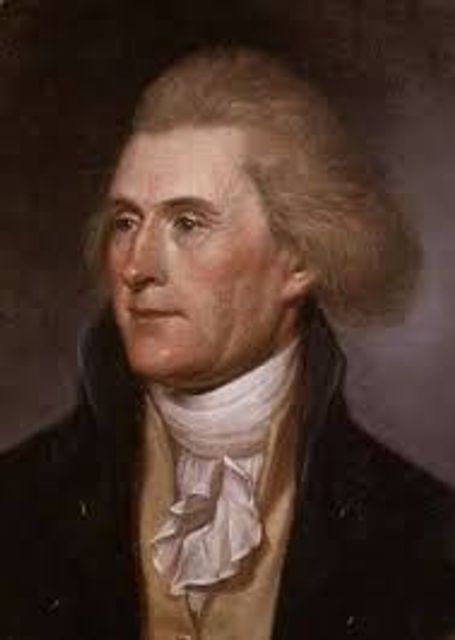 Jefferson, like most of the Founding Fathers, believed that slavery would wither away if contained. He authored the Northwest Ordinance of 1787, banning slavery from what is today called the Midwest. As president in 1807, he signed into law the termination of the transatlantic slave trade.

Yet slavery would not vanish “with the consent of the masters,” as Jefferson hoped in his Notes on the State of Virginia, but “rather by their extirpation,” as he feared. The resolution came in the form of the Civil War, 35 years after Jefferson’s death on July 4, 1826. Some 700,000 died to end slavery in the Second American Revolution, which lasted from 1861 to 1865.

When Wilder and his ilk denounce Jefferson, what they really condemn is not Jefferson the slave-owner, but Jefferson the author of the Declaration of Independence, who coined perhaps the most famous line in all of English prose: “We hold these truths to be self-evident, that all men are created equal.”

A figure of world-historical stature, Jefferson’s stirring words and his insistence that “it is the Right of the People to alter or to abolish” any despotic government helped inspire the French Revolution of 1789. Elsewhere, Jefferson reminded the world that “the tree of liberty must be refreshed from time to time with the blood of patriots and tyrants.”

These injunctions from Jefferson, which reverberate throughout American history “with terrible force,” in the words of historian Gordon Wood, make figures like Wilder understandably nervous. Wilder is a loyalist to a president, Barack Obama, who has engineered an unprecedented assault on “life, liberty, and the pursuit of happiness,” arrogating to his office the right to assassinate anyone, anywhere, without legal charges, and has overseen the most dramatic growth of social inequality in history.

Like any other historical figure, Jefferson could not catapult himself out of the times in which he lived. If he embodied more than any other leader the contradictory character of the American Revolution, which posed for the first time the claim of full human equality but had no means of establishing it, this only adds to his fascination as a historical figure.

As for hypocrisy, one wonders if Wilder and Jefferson’s other critics are prepared to turn over the gains they have made by speculating on the surging stock market of recent decades—money intimately bound up with the super-exploitation of the working class. Unlike Jefferson, who could say with the other revolutionists of ’76 that they had staked “our lives, our Fortunes, & our sacred Honor” on a “glorious cause,” Jefferson’s haters in 2015 have staked absolutely nothing on their subjective and deeply a-historical attacks.

In contrast to Jefferson, Jackson was an unabashed advocate of slavery, whose own immense personal fortune was bound up with the forced dispossession of the “Six Civilized Tribes” of Native Americans from the Southeast—the Cherokee, Chickasaw, Choctaw, Creek (Muscogee) and Seminole—by way of the “Trail of Tears,” one of the greatest crimes in American history. 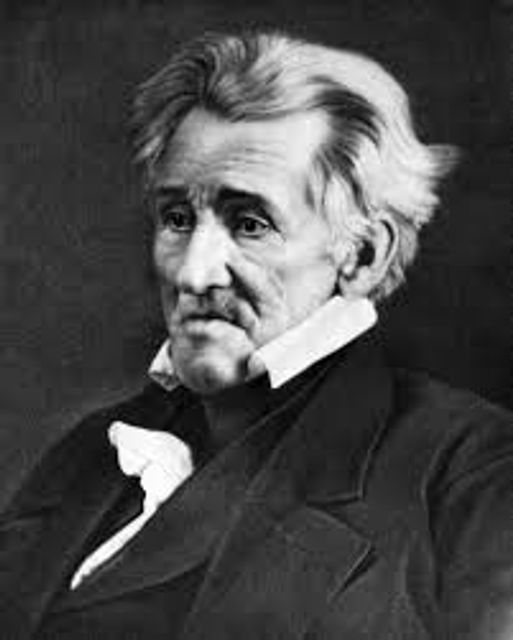 Jackson’s presidency coincided, however, with the expansion of the right to vote and the participation in party politics of propertyless white men of the North. This entailed the subordination of sections of the working class, especially the urban poor, to the Slave Power, courtesy of “city machines” such as Tammany Hall in New York and elements of northern capitalism oriented to the cotton trade. The resulting political formation, actually engineered by Jackson’s vice president, Martin Van Buren, was the real birth of the Democratic Party.

Jackson’s longstanding veneration within the Democratic Party was based on the endurance of his political formula after the Civil War. For most of the 20th century, the Democratic Party remained an alliance of sections of American capitalists, northern city bosses and Southern white supremacists.

In the 1940s, Jackson was endowed with a new historical dimension, owing heavily to Harvard historian Arthur M. Schlesinger, Jr.’s Age of Jackson. Schlesinger portrayed Jackson as a tribune of the common man, an opponent of “moneyed interests,” and a harbinger of the social reformism of Franklin Delano Roosevelt’s New Deal.

Given this history, it is perhaps unsurprising that the Times article about the move to rename the Jefferson-Jackson Day dinners, while approving in tone, also betrays nervousness, warning of a “modern Democratic Party more energized by a desire for racial and gender inclusion than reverence for history.”

The Democratic Party is, after all, the oldest party in the world, and it is one half of a two-party system that has not broken down since the Civil War. This has been no small feat in a country as geographically vast and socially complex as the United States.

Within that system, the Democratic Party has played a particular role, as the mechanism by which every mass social movement has been channeled back into the confines of capitalist politics, from the Populist movement of the 1890s, to the revolt of industrial workers in the 1930s, to the Civil Rights and anti-Vietnam War movements of the 1960s.

The invocation of Jefferson and Jackson must therefore be historically understood as part of the Democratic Party’s attempt to position itself as the party of the “common man” and head off the emergence of an independent political movement of the working class—that is, to prevent the emergence of socialism. In this connection, it is noteworthy that Schlesinger’s1946 effort to discover an authentic American social reformism in the very origins of the Democratic Party coincided with the onset of the post-war Red Scare and the drive to eradicate the influence among workers of socialism, which was portrayed as an alien ideology. 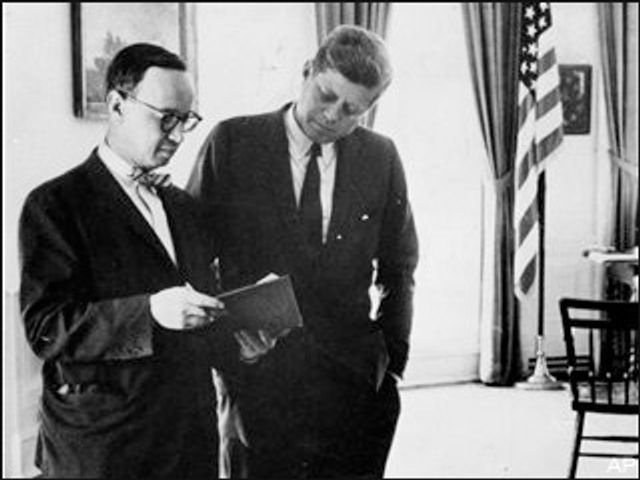 That this role is being jettisoned is a source of some nervousness.

“Jefferson and Jackson and the ideas they stood for… is what unified the party across regional and other lines for most of the last 200 years,” former Clinton speech writer Andrei Cherny told the Times. “Now what unites everybody from [celebrity] Kim Kardashian to a party activist in Kansas is cultural liberalism and civil rights.”

Cherny expresses the fear of a layer of the Democratic Party elite that, by rejecting its historical association with social reformism—dead in practice since the late 1960s—the party is narrowing its “base.” This process is, in fact, far advanced.

The Democratic Party, no less than the Republican Party, is dominated by billionaires. Neither can truly be said to be a national party in either a social or geographical sense. Yet both parties still require a somewhat larger constituency than those whose names appear on the Forbes 400 list. This the Republican Party finds among the aggressive and ignorant nouveaux riches and America’s dwindling ranks of religious bigots and racists.

The Democratic Party, on the other hand, has cultivated an upper-middle class layer that includes beneficiaries of affirmative action programs, inhabitants of academia, and trade union bureaucrats. This privileged layer, located comfortably within the 10 percent of richest households, is deeply hostile to the working class, socialism and America’s own revolutionary traditions. Its social composition is the basis of its hostility to history.