The United Auto Workers’ “contract summary” for its agreement with Fiat Chrysler (FCA) was leaked to the media on Friday. The aim of these “highlights” is to present the deal in the best possible light as part of efforts by the union to force through a vote as early as next week. The document nevertheless makes clear that the union and the company are conspiring in another historic attack on autoworkers. 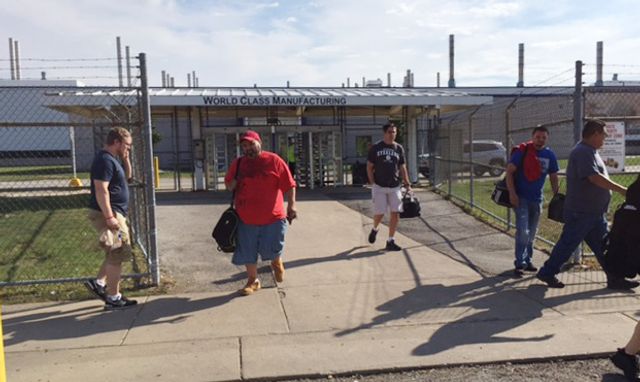 Workers at the Toledo Jeep plant

The WSWS calls on autoworkers to begin organizing now to reject this sellout agreement with the contempt that it deserves.

The release of the summary for a four-year agreement follows the joint press conference between UAW President Dennis Williams and FCA CEO Sergio Marchionne on Tuesday in which the two hailed the “alignment of interests” between the union and the company and spoke of an end to any “adversarial relationship.” The new deal aims to bring the corporatist relationship to an even higher level, with the UAW playing the role of labor contractor and health insurance provider, tasked with intensifying the exploitation of the workers it claims to represent.

The language of the summary makes clear that the union sees its main role as increasing the profits of the company. In promoting the expansion of “profit sharing” agreements, the UAW writes that the “profit margin is a key metric commonly used by management and the investment community as a tool for measuring financial performance of companies.” It therefore “makes sense that our profit sharing plan is aligned with this metric.”

In other words, the pay, benefits and conditions of workers must be entirely subordinate to the profit demands of the company and its “investors”—i.e., Wall Street. The entire agreement is based on this conception.

There are three main fronts in the attack on autoworkers: health care, wages and corporate restructuring plans.

While the summary provides no real details of the “health care co-op” proposed by the UAW and agreed to by the company, it is clear that both the union and FCA see driving down health care costs as central to reducing overall labor costs.

The introduction of the “summary” includes the following language: “Health care costs are rising. It’s a problem for the company, it’s a problem for us, and it’s a problem for our nation. Knowing that there is no realistic way for us to protect our quality health care and cut costs, we proposed the trailblazing idea to create a health care cooperative (co-op) to provide medical benefits for active employees in the same way that we had the foresight to establish the Voluntary Employee Beneficiary Association (VEBA) in 2007 to protect health care for UAW retirees.” (emphasis added)

In fact, the VEBA did not “protect” health care. It allowed the auto companies to offload the provision of health care to the union, financing the new fund with significantly less money than they were paying for retiree health care benefits. For the union, it created new business opportunities and a massive slush fund of tens of billions of dollars to finance a bloated bureaucracy. For retirees, it has meant relentless cuts in services and increased costs.

The UAW is now seeking to expand these operations to cover current workers with the new contract. The drive to cut health care costs is entirely in line with the overall strategy of the Obama administration’s health care overhaul, including the “Cadillac” excise tax aimed at encouraging companies to ditch or modify health care benefits that provide workers with a higher level of care.

The union’s summary employs the standard sophistries and obfuscations used by the government and corporations about cutting costs through “innovations,” but for workers this inevitably translates into reduced benefits. Underscoring its commitment to the profits of the company, the union writes that cutting health care “generates savings that can be channeled into other areas of our compensation and the business for ultimate job security.” (Emphasis added) The claim that improving the profits of the company (and the payoff to executives and investors) ensures “job security” is a lie delivered again and again by an organization that has overseen the destruction of hundreds of thousand of autoworker jobs.

The summary adds that the UAW and FCA “discussed the excise [Cadillac] tax imposed on high cost employer sponsored health care plans.” For any plans that will be impacted by the tax, “the company and the UAW will meet and discuss plan design option changes to bring the cost under the tax threshold.”

This means a drastic reduction in coverage. The auto companies have said that they pay an average of about $14,800 per worker on health care, and the “Cadillac” tax applies to plans over $10,200 a year for individual workers. To “bring the cost under the tax threshold” therefore means cuts of over 30 percent.

Wages and the preservation of the “two-tier” system

The new agreement maintains the hated two-tier wage system, and in fact creates the conditions for a multi-tier system. Tier-one workers, who have suffered for more than a decade without a wage increase—while giving up holiday pay, cost of living adjustments and personal days—will receive almost nothing, while lower-tier workers will have to work many years to reach a wage rate that is significantly below what tier-one workers are currently receiving.

According to the summary, “traditional [tier-one] employees” will get a 3 percent wage increase in the second and fourth years (84 cents and 87 cents per hour) along with a 4 percent lump-sum payment in the second and fourth years. With the increased cost of living factored in, this means that real wages for tier-one workers will remain flat throughout the life of the contract, after ten years of declining real income.

Tier-two workers will start at $17 an hour (nearly half the wage of tier-one workers) with the ability to rise to a maximum of $25.35 an hour after seven years. By the end of the contract, newly hired workers in 2015 will only rise to $22 an hour, with other workers rising to $23 or $24 an hour. With no guarantee of future wage increases, several workers who spoke to the WSWS noted that this meant the creation of multiple tiers, each earning a different rate.

Both FCA and the UAW are working to create even more divisions between workers within the plants, pitting young against old in a drive to increase productivity through relentless speed-ups. The deal includes a special profit-sharing provision for tier-two workers that kicks in when FCA has a North American profit margin of more than 8 percent.

The aim is to pressure younger, lower-paid workers making poverty-level wages to increase their output and accede to union-management demands for ever greater speedup. This would help drive out higher-paid older workers or allow the company to implement layoffs and add more jobs to the workers who remain. Once tier-one workers are driven out, the entire workforce will be making significantly lower wages than a decade ago.

The deal also includes a $3,000 signing bonus, less than was included in the last contract. This is aimed at exploiting extreme economic insecurity of lower-paid workers, in particular, to get them to back an agreement that will only worsen their conditions. The signing bonus will be subject to taxes, and the UAW highlights make clear that it, as well as all lump sump payments, will include a deduction for union dues.

The UAW is trumpeting the supposed commitment by the company to invest $5.3 billion in the US over the life of the contract, but this commitment is rotten through and through.

First, the UAW’s summary itself notes that this “commitment” is “contingent on consumer demand and the company’s ability to generate sustainable and profitable vehicle volumes for all of its US facilities.” In other words, it is not a commitment at all. Rather it is a pledge by the UAW to work with the FCA in implementing a whole network of schemes to restructure operations, creating the conditions for significant layoffs and even plant closures.

Media reports have indicated that FCA plans to move some vehicle production to Mexico to take advantage of cheaper labor, including the Chrysler 200, Dodge Dart and Jeep Crossover. It is also reportedly moving the Jeep Cherokee out of the Toledo Assembly Plant in Ohio and the Dodge Ram pickup truck out of the Warren Truck Assembly Plant in suburban Detroit.

A worker at Warren Truck said that one of the aims is to shift tier-two workers out of that plant to Sterling Heights, where the more profitable Ram will now be produced. Tier-one workers will be left at Warren Truck, where they could be more easily subject to layoffs.

Whatever the aim, workers are not being told the truth about what is being planned by the company. Among the topics in the behind-the-scenes discussions between FCA and the UAW is a possible merger with GM or some other company, which would lead to thousands of layoffs. At the press conference earlier this week, Marchionne said that these “capital usage” issues were the top priority in his mind, with the company seeking to enlist the UAW—a major shareholder in GM—in its plans.

The deal with FCA, which covers 36,000 workers, will be followed by discussions between the UAW and Ford and General Motors.

There can be no doubt that the actual contract—presuming that a full contract has even been written—has many more attacks against workers than the self-serving highlights put out by the UAW. As always, the intention of the union is to hold votes as rapidly as possible without giving workers the ability to study the agreement that they are signing. One worker in Toledo told the WSWS that workers only received a full copy of the 2007 contract in 2011—that is, four years later.

Both the company and the UAW are well aware that there is enormous opposition among workers to the deal. The union will now proceed with all manner of lies and threats, including potential job cuts, in an effort to get votes through. Nothing that the UAW says in upcoming meetings can be believed. It is in bed with the company and thoroughly hostile to the interests of auto workers.

Resistance must be mounted, but this requires that workers take the initiative by forming rank-and-file committees, independent of the UAW and opposed to its subordination of workers to the profit dictates of the auto companies, Wall Street and its political representatives in the Democratic and Republican Parties.

The WSWS urges workers to begin forming such committees now, to block the UAW’s efforts to ram through the agreement before workers have the chance to read and study the contract. Workers should insist on the right to have the contract for several weeks before any vote is held. The committees should establish lines of communication—between different plants and between auto workers and other sections of the working class in the United States and internationally—to begin a working-class offensive against the auto bosses and the entire ruling class.

The 2015 US autoworkers contract fight