Recent images taken by NASA’s Mars Reconnaissance Orbiter (MRO) and published in Nature Geosciences show the presence of hydrated salts in dark streaks on slopes across Mars. These features, strongest during the summer months where temperatures rise above the melting point of ice, provide the best evidence yet of liquid water flows on the surface of present-day Mars. 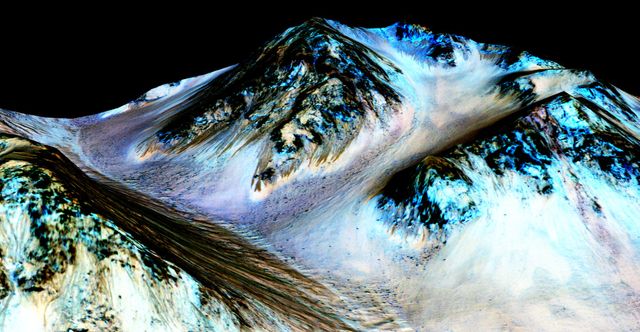 The dark, narrow streaks on the slopes of Hale crater are called recurring slope lineae and are thought to be caused by seasonal flows of liquid water on present-day Mars. This false color image was taken by the HiRISE instrument aboard MRO. Credits: NASA/JPL/University of Arizona

The research was conducted with a team from the US and France led by Lujendra Ojha using MRO’s Compact Reconnaissance Imaging Spectrometer for Mars (CRISM) and High Resolution Imaging Science Experiment (HiRISE). It follows work done by the Mars Global Surveyor spacecraft in 2006 and a previous MRO study in 2011 showing what looked to be recently dried stream beds on slopes in different parts of Mars. Those initial studies were cautious about declaring liquid water flowing on Mars but optimistic about the possibility and provided direction for future research.

Hints that salts were present on Mars first appeared during the tenure of the Viking landers, which found the signature of chloride interacting with ultraviolet light from the Sun, a characteristic of salt from seawater on Earth. Much higher levels of perchlorates were detected by the Phoenix lander in 2008 and again in 2012-2013 by the Curiosity rover. They are now thought to be common across the planet.

Ojha’s analysis traced the existence of particular types of salts (a mix of chlorates and perchlorates) in the dark streaks, called recurring slope lineae (RSLs). While salts occur across the Martian surface, they are found in unusually high concentrations in the RSLs, indicating that the salts are somehow deposited with a certain amount of regularity again and again. The simplest known method for this to occur is for the salts to be dissolved in liquid water and then precipitated as the water evaporates. 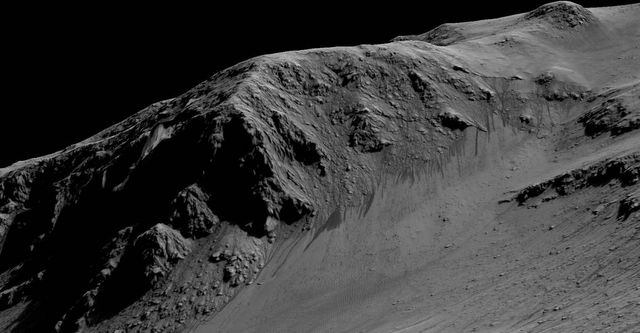 Each of the recurring slope lineae at Horowitz Crater are roughly 100 meters in length. Credit: NASA/JPL-Caltech/Univ. of Arizona

Further evidence for liquid water flows arises from the fact that the RSLs are seasonal in appearance. During the Martian winter, they all but vanish. During the Martian summer, however, they reappear. This holds true for all four locations studied by Ojha’s team. The fact that the temperatures on Mars during its summer hover within 20 degrees Celsius of water’s freezing point and that Martian salts can decrease that freezing point by 70 degrees Celsius and the general stream-like look of the RSLs are further indications that the cause is liquid water flowing across contemporary Mars.

To be clear, any liquid water on Mars is going to be briny and very unlike the waters of Earth. The only place on Earth that even remotely approximates the conditions on Mars is in the intensely arid core of the Atacama Desert in northern Chile. There, water from the atmosphere condenses onto salt crystals and is the only known place in that hostile environment that bacteria exist. This process, called deliquescence, is one way that the water flows could be forming on Mars.

Other suggestions for the origin of water on Mars include the subsurface melting of ice, a seasonal discharge of a local aquifer or some combination of all three methods in different parts of Mars. Further research is needed to determine the source of the water forming the RSLs.

The admitted weakness in the study is the resolution of the CRISM instrument, a spectrometer which is only just able to fully resolve the broadest of the RSLs. However, the authors were careful to do exactly that, targeting the best candidates for study using data from the HiRISE instrument and taking a large enough sample to be confident of the results. 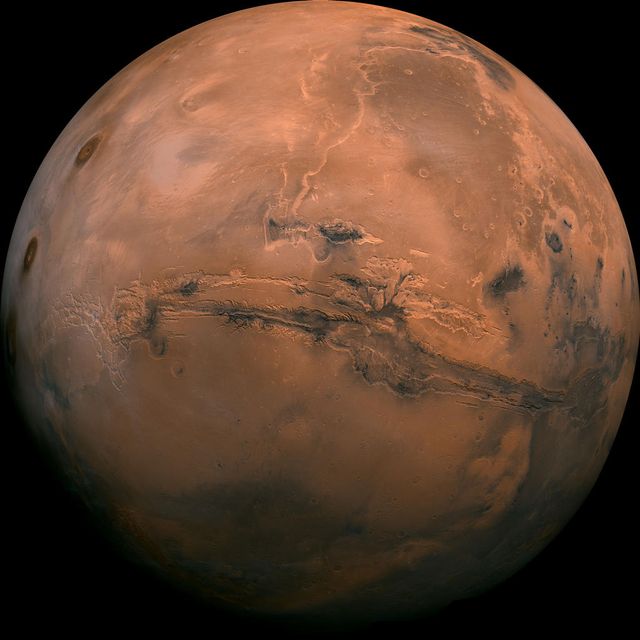 The Valles Marineris as would be seen from 2500 kilometers above the surface of Mars. Credit: NASA/JPL-Caltech

Searching for liquid water on Mars has a history spanning centuries. The first published map was made by Johann Heinrich Mädler in 1840. In the following decades, astronomers such as Angelo Secchi and Giovanni Schiaparelli noted both seasonal changes and dark linear features referred to as “canali” (Italian for “channels” or “grooves”). The idea that these were artificial creations designed to carry water across great distances for irrigation purposes (i.e., canals) was largely popularized by the wealthy businessman Percival Lowell.

Though the idea entrenched itself to a degree in the popular culture of the time, scientists at the time were skeptical. E. E. Barnard, working at Lick Observatory, saw nothing resembling canals during his observations. Joseph Edward Evans and Edward Maunder demonstrated that the lines seen on Mars could in fact be optical illusions. Alfred Russel Wallace noted that the optical spectroscopy showed no evidence for a significant amount of water in the Martian atmosphere.

The matter was finally put to rest when Mariner took the first close-up pictures of Mars in 1965. It showed that Mars’ atmosphere had a temperature and pressure far lower than Earth at the surface, ending any last illusions of fertile land on the planet.

Research into Mars was renewed by the advent of infrared astronomy, at the time conducted using telescopes on board specially designed high-altitude airplanes. In 1973, three years before the Viking spacecraft landed on Mars, a team led by Jim Houck and including Carl Sagan found a new signature in the Martian surface indicating the presence of water ice. The analysis suggested “this bound water comprises about one percent by weight of the surface material,” in agreement with subsequent decades of Mars measurements from orbit and from the surface.

Since then there have been a slew of observations characterizing the Martian surface and atmosphere. Included in this are a variety of ground-based telescopes, the Hubble Space Telescope and the fleet of spacecraft and landers that have visited Mars since the 1970s. These include past missions such as the Viking and Phoenix landers and Mars Pathfinder and Spirit rovers, as well as operational missions such as the Mars Odyssey, Mars Express, Mars Reconnaissance Orbiter, Mars Orbiter Mission and MAVEN spacecraft and the Opportunity and Curiosity rovers. Mars is by far the most extensively studied planet in our solar system.

As with all announcements of more evidence for liquid water on Mars, one again asks: What is the possibility that alien life exists on Mars? While it is certainly tantalizing to think about microbe cultures similar to those in Atacama evolving on Mars, a great deal of careful study and specialized future missions will be needed to answer such a profound question.