The United Auto Workers has reported that a new six-year contract covering 11,000 workers employed by farm equipment giant John Deere was ratified Sunday. The UAW rushed through the vote on the agreement, reached last Wednesday, without giving workers any information outside of a cursory 17-page “highlights” document distributed at ratification meetings Sunday.

“A new labor agreement has been ratified by UAW members at Deere & Company,” the UAW wrote in a brief statement on its web page, without providing any details of the vote. “The new agreement provides many improvements for UAW members which include compensation and working conditions for nearly 10,000 members while giving Deere & Company the necessary tools to grow its business.”

Many workers were outraged at the UAW’s claims, saying there was widespread opposition to the sellout agreement. One unofficial report from a worker to the WSWS Autoworker Newsletter stated the vote supposedly passed by a bare 180 votes.

Around 5:00 PM Sunday, Local 838 in Ottumwa, Iowa reported on its web page that workers rejected the contract, with 66 percent voting “no” and only 34 percent voting “yes.” Later in the night, this was changed to reflect the official press releases of the UAW and John Deere to suggest that the contract had been ratified. No total official vote count had been released as of yet.

One worker from Moline told the WSWS, “In the meeting, on the local’s Facebook page, by far the majority is a ‘no’ as of right now. Another worker said the contract was defeated in Waterloo with 67 percent rejecting.”

During the Fiat Chrysler vote, workers at the Warren Truck Assembly Plant in suburban Detroit disputed the claims that the deal had passed at their plant, with many raising the possibility that the UAW simply rigged the vote. Deere workers also expressed suspicions given the widespread hostility to the deal.

There was deep disquiet at meetings Sunday in Moline, Illinois and Waterloo, Iowa, two major centers of Deere production (see “Deere workers denounce sellout contract”). Workers told a reporting team from the World Socialist Web Site that they had been given no details of the contract and that there was total silence leading up to the vote. There was enormous opposition to the lack of information from the UAW and a fear of being kept in the dark.

During the contract meeting, workers were presented with the bogus summary and were expected to vote within two hours with barely any discussion. One union official reportedly told workers in Moline, “I think you’ll all be pleasantly surprised with what we got you.”

After some of the details of the deal were revealed, one worker texted the WSWS Autoworker Newsletter, “People are pissed!” Much like the previous contract in 2009, what workers got was a sellout agreement that preserved and deepened the hated two-tier system, increased out-of-pocket costs for their health care and escalated the status quo of a two-decade long erosion of their living standards.

The deal includes an insulting $3 wage increase over the six-year span of the contract. Exploiting the economic hardships caused by previous UAW-backed concessions, the deal also included a $3,500 signing bonus, which is no substitute for an increase in base pay.

If the deal passed, it was only because the UAW and the company combined to use mass layoff threats as a gun pointed at the heads of workers. Moreover, workers have no confidence that the UAW would lead any genuine struggle against the company.

Reporting teams from the WSWS were warmly received in Iowa and Illinois. Reporters distributed thousands of leaflets of the statement, “Reject UAW deal to ram through sellout agreement!” As workers read the statement—and discussed the overwhelming “no” vote by autoworkers at Fiat Chrysler—belligerent union officials sought to prevent workers from reading the material.

The local bureaucrats absurdly complained that the campaigners were urging workers to vote “no” on a contract that they had not yet seen. These claims were made as the UAW was pushing them to vote “yes” without seeing the contract. As the statement said, “Nobody would buy a house if they were given only a couple of hours to examine it, let alone only a brochure of ‘highlights’ prepared by some real estate agent who stood to make a lot of money. It would be no less mad for workers to accept the word of Norwood Jewell and the rest of the UAW, who also have a business interest in swindling them into buying this deal.”

The most pressing concern of the UAW was to get the Deere agreement through in any way possible after the defeat of the Fiat Chrysler deal in order to prevent a unified struggle by Deere workers and autoworkers.

The UAW first pioneered the hated two tier system at John Deere in 1994—in the face of enormous opposition from workers—before bringing it to the auto industry in 2007 and escalating its use during Obama’s restructuring of GM and Chrysler in 2009.

Deere has laid off over 1,500 hourly workers company-wide since 2014, citing weakening demand. Despite falling profits, Deere is projected to make over $1.8 billion this year. Since the beginning of the last contract in 2009, however, the company has seen record profits and made billions off the labor of its workers.

Much like his counterparts in the auto industry, John Deere CEO Samuel Allen made millions of dollars in previous years and oversaw the use of stock buybacks to enrich the wealthiest shareholders. One worker denounced this, telling the WSWS, “We have to take concessions now that we’re in a bad farm economy. What happened to the six years of record profits?” 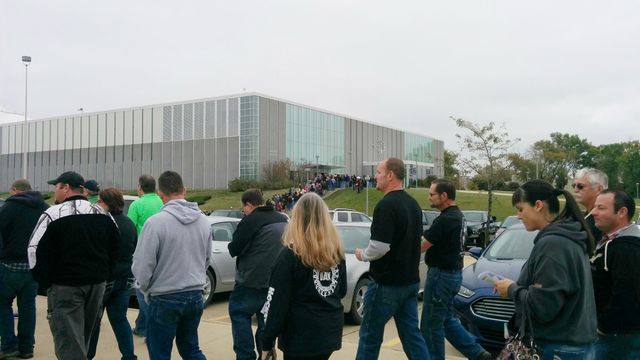 Reflecting the contempt for democracy among union bureaucrats, Bill Dotzler—a former UAW official and current Democratic State Senator in Waterloo, Iowa—told the Waterloo-Cedar Falls Courier that he “got to see a lot about negotiations” during his tenure at Local 838 from 1974-2004. He added, “But it was always tight-lipped, and a lot of times people don’t understand it’s for the best they keep negotiations private and not get people worked up in the community.”

He observed that the UAW’s approach to negotiations has been transformed over the decades, from an adversarial relationship to one of open collusion with the companies against the membership.

“The union guys would make some kind of statement about how things were going and they got into back-and-forth, and the thing just made it more difficult. I think those times were reflective of when it was more adversarial between the company and the union. Now, the labor unions and John Deere have really worked in more of a partnership, so they don’t want to talk about it [publicly]. In fact, the local-level people don’t get to hear.”

The outcome of this “partnership,” (i.e., conspiracy) is a six-year deal that will further undermine the jobs, living standards and working conditions of Deere workers.

The ramming through of the contract shows that the deep-seated opposition by Deere workers can find no expression through the UAW, which functions unashamedly as a tool of corporate management and whose executives are paid handsomely for enforcing the corporation’s dictates.

The fight is far from over. The WSWS urges Deere workers to begin organizing independently of the UAW, through the formation of rank-and-file factory committees, to wage a common fight with autoworkers and other sections of workers.

The 2015 US autoworkers contract fight