More than 2,000 locked out steelworkers at Allegheny Technologies Inc. (ATI) have begun to receive notices that the company is canceling their health care at the end of November. ATI’s decision to cancel health coverage is part of the company’s drive to break the workers, who are now nearing the end of their eighth week on the picket lines.

ATI began locking out its workforce in six states on August 14, just days after presenting its “last, best, and final” contract offer. The company has hired a small army of private security guards and the strike breaking firm Strom Engineering to staff the mills with scabs. ATI is claiming that it is restoring some production at its mills. 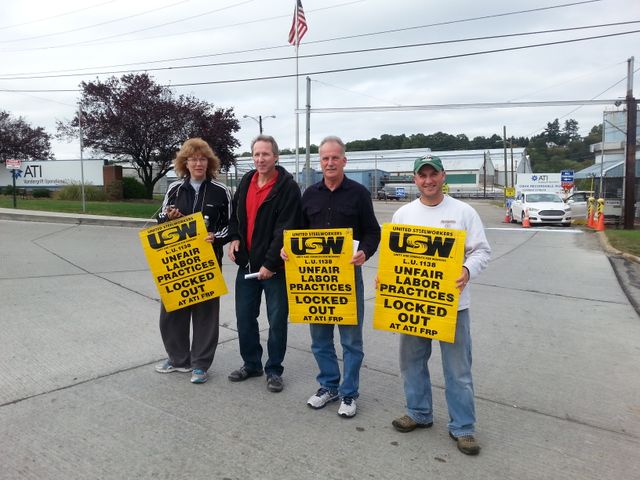 Locked out steelworkers picket outside ATI's mill in Vandergrift Pennsylvania

ATI is demanding increases in out-of-pocket health care costs that could rise above $10,000 per family per year. In an attempt to sow divisions between younger and older workers, the company is demanding the elimination of employer-paid pensions and health care for new hires when they retire.

The company also wants to impose work rule changes that would essentially turn workers into casual laborers. It is seeking to convert up to 40 percent of its workforce into outside contractors, another form of highly insecure casual labor.

After health insurance coverage for locked out workers expires on November 30, workers will be forced to choose between a variety of expensive and largely low quality health care options. Cobra plans run on average $1,200 a month, which would eat away large portions of any unemployment benefits workers are receiving.

In the face of the ATI’s attack on workers, the United Steelworkers (USW) is continuing its strategy of isolating and suppressing workers’ struggles across the country. Despite the intransigent concession demands of US Steel and ArcelorMittal, the USW has ordered the 30,000 steelworkers at these companies to continue working more than a month after their contract expired September 1.

After negotiations with both companies last week, the USW insisted that it is “committed to continuing to bargain for as long as it takes to reach a fair agreement.” US Steel and ArcelorMittal are seeking deep cuts to health care for both current and retired workers, along with the ability to contract out thousands of additional jobs.

The USW’s treachery at ATI is paralleled by its actions at Sherwin Aluminum mill in Gregory, Texas, where 450 steelworkers have been locked out for over one year. On October 2, the National Labor Relations Board ruled that the lockout was lawful.

In response, USW Vice President Tom Conway pleaded with the company to rehire the locked out workers. “We call on Sherwin to end the lockout now and commit to bargaining a fair agreement.”

Rick Claypool, a shipping crew leader at ATI’s Baghad plant with 41 years at the company, spoke of the impending expiration of health care coverage. “Our healthcare runs out November 30. Cobra [private insurance] is $1,200 a month. Our unemployment is only $2,000 a month.

The USW is currently disbursing $200 per week per locked out worker to affected locals, to be distributed as the locals see fit. This completely inadequate payment from the USW’s $350 million strike fund is being distributed undemocratically by the locals as another mechanism for disciplining locked out workers. Even if the USW was giving the full $200 per week in cash, this would only cover one-sixth the cost of Cobra insurance.

Speaking of the hardships the lockout has imposed on his family, Rick continued, “I have three adult children. One of my kids is in college, so I have to keep working.”

Rick noted that the proposed contract would mean major reductions in retirement benefits for new hires. “They want to give the new hires 401(k)s instead of defined pensions. One of my children is on a 401(k). They [ATI] would have to put a lot of money in the 401(k) for it to be as good as a pension.”

“A lot of politicians talk about raising up the middle class, but the only way to do that is to organize labor, and I don’t see any of them supporting us.”

Both Rick and another picketer Kim had not heard of the Sherwin Alumina lockout. Kim said, “I bet after a year, a lot of those workers are pretty fed up.”

The USW has also been urging its members to look for other work. Speaking of a job fair, a steelworker with five years said, “It is hard changing jobs at any age because of the economy. There aren’t many jobs out there and they don’t pay very well. ATI knew what it was doing when they picked this time to lock us out.

“It is hard to move a family, I don’t want to have to pick up my kids and put them in a new school.

“I think ATI had this planned, they know this would be a hard time on us.”

Another picketer who has worked for ATI for over 27 years, who also attended the job fair, said, “There is slim pickings of jobs right now. I am not ready to retire, I still have a family to support.

“They say that once their new mill is up and running, they will be making another $500 million. How much does a company need to make?

“Everything they are doing is to break the union. Without a contract, it will be like the old days. You will show up each morning and you won’t know whether you are working 12 hours, four hours or not at all. You will have to stand around at the gate until they call you. If they don’t like you, if you are not a company man, than you won’t get to work at all.

“They are absolutely trying to make an example out of us. They would like to do this everywhere.”