I recently visited the Museum of Fine Arts (MFA) in Boston to see the exhibition Class Distinctions: Dutch Painting in the Age of Rembrandt and Vermeer, which had been reviewed in detail on the World Socialist Web Site. I had spent several hours going from room to room viewing the remarkable collection of paintings, but had not yet seen Vermeer’s “A Lady Writing,” one of the works I was most anxious to see. I asked a guard on hand where it was, and she enthusiastically led me to an inside wall where the small painting was located.

If MFA management has its way, such interactions between the museum guard staff and the visiting public will be drastically curtailed. The approximately 95 guards organized in the Museum Independent Security Union (MISU) are protesting efforts by the MFA to impose less-flexible schedules that will make it impossible for a significant number of workers to keep their jobs. 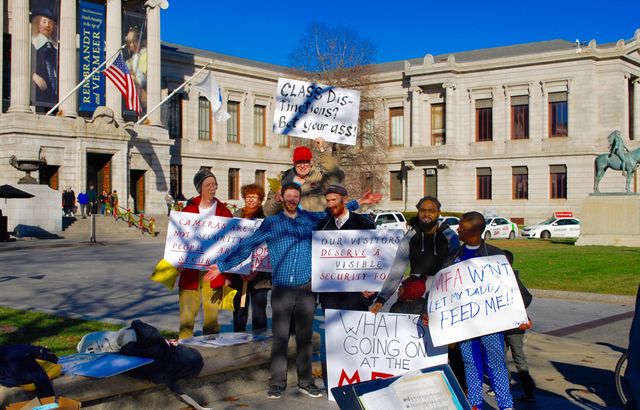 The protest outside the Museum of Fine Arts in Boston

The moves by management are what some of the guards refer to as a “militarized” approach to museum security, in which more reliance is placed on security technologies such as ceiling-mounted cameras and video surveillance at the expense of personnel. Guards’ work would be shifted more toward security preparedness and conflict resolution, with workers undergoing drill training to resolve conflicts and prepare for situations such as those involving active shooters.

The WSWS recently spoke to guards protesting outside the museum. “Our contract was supposed to technically expire June 30 as usual, but it’s being extended until we create a successor contract or until March 31, whichever one comes first,” said MISU President Evan Henderson. He said that management is trying to implement changes unilaterally on January 3, which is within their rights under the contract.

Henderson explained the multiple issues at stake: “They’re trying to change our hours drastically to try to simplify it on their end so that the business will run itself and they don’t have to manage the schedules at all. But it’s ruining the lives of its employees.

“It’s making it so working class families and single parents are going to have to quit their jobs, as it’s no longer flexible. We have a lot of part-timers here who are also teachers at the museum, who can no longer do that if they change the schedules that way. Not to mention students who take classes, who will no longer be able to take classes and work here.” 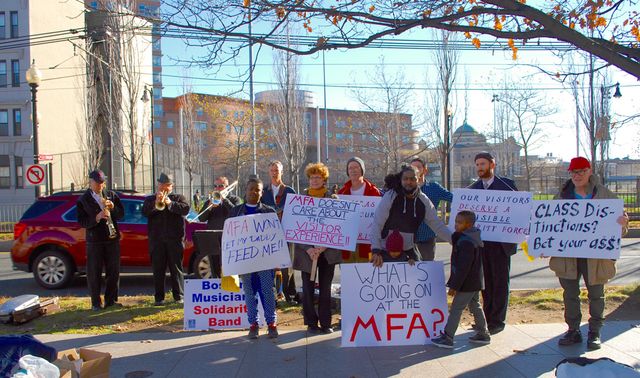 There will only be three possible schedules for guards, and full-time workers will have to work an eight-and-a-half-hour day on a non-flexible basis, making it impossible for many workers to keep their jobs.

“They’re trying to simplify it for them,” he said, “So it’s also cutting costs. Right now, we get overtime for working extra hours. They’re trying to cut down on that so it’s going to be saving them money. Also, they’ve been saving money over the years because they’ve been understaffing the galleries.”

Since a hiring freeze was put in place a year and a half ago, 10 to 15 guard jobs have been lost. “And if you notice,” Henderson added, “you’ll maybe walk through about 12 galleries without even seeing one guard, and that’s terrible. You go to places like the Met or the Harvard museums, and you’ll find a guard or two guards in every gallery. Here, that’s absolutely not the case.”

“I think this shows that they do not care,” he said. “They’re not interested in the art, they’re not interested in this cultural institution. We were all hired because we love this place. And because we provide customer service, we provide the visitor experience; we’re the face of the MFA. We’ve been commended on our knowledge of the artwork. They’re trying to take all of that away from us.”

Henderson drew a parallel between the guards’ struggle and the Class Distinctions exhibition. “It is ironic that it takes place at this time, and right before the holiday season,” he said. “The museum is really being a Scrooge.”

“We’re fighting for keeping our working conditions and keeping the families and the single parents who work here today that need this job to live. We want to do the jobs that we love to do, the jobs that we were hired to do. They’re trying to fit a square peg into a round hole, and it’s not going to happen.” 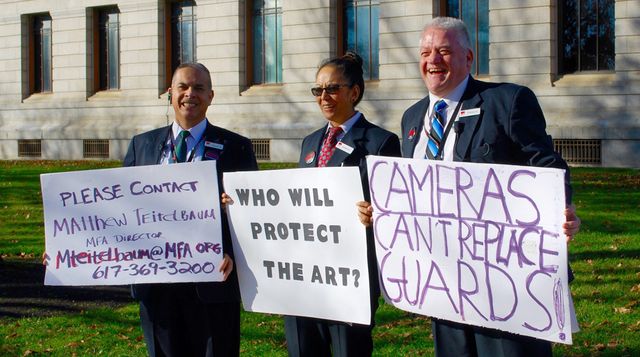 Guards on their break took part in the protest

Jeffrey Ellse, a former MISU president, said, “I’ve been a security guard here for about 13 years. I have multiple capacities here: I’m a security guard but I’m also a teacher.” Ellse, who is Jewish, explained his personal situation: “About four years ago, I became more observant and I started taking Saturdays off for religious reasons.”

He said that while management had accommodated him in the past, “Now the options that they’ve given me are almost impossible to fill. Even within those plans, it says that I would have to work on Saturdays, which is completely against the law.”

“So there have been some serious difficulties for me personally,” he added, “but I think for the union as a whole, with them trying to push through this plan, it’s really flawed. They’re even doing things that are not, I guess, Kosher. It’s very strange that it would come from a place like this, which prides itself on diversity. That’s what they want their image to be, but on the inside it isn’t always expressed like that.” 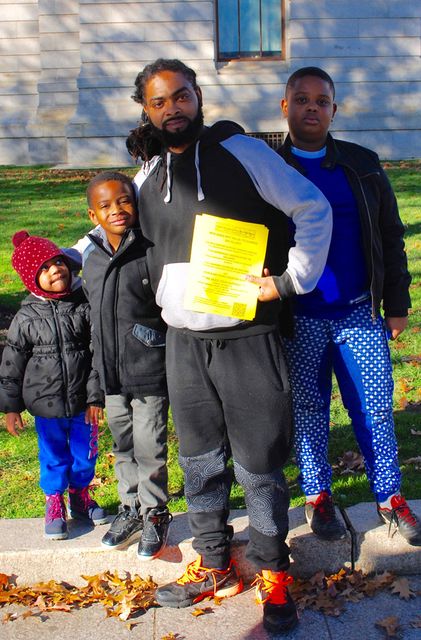 Landy Ruffin came to the protest with his children

Landy Ruffin, who has worked at the museum for almost 10 years, attended the protest along with his children. “As you can see, I’ve got my kids with me,” Ruffin said. “I have three kids: my daughter is four years old, my son is six, and the oldest one is ten. One I have to take to the bus stop at 7:35 in the morning, my daughter and the other son go at 8:00. So now they’re trying to change the schedule.”

Ruffin said he didn’t have anyone to help him drop off his kids at school in the morning. “My wife goes to work every day at 5 a.m.,” he said, “so I’m the one who takes care of the kids in the morning. I can’t just leave my kids and say, ‘Wait for the bus’ and just go to work. They want me to be at work at 8:00, so that means I have to leave my house around 7:00.